I hope you are all well and finding plenty of time to craft.

Apologies for being MIA during the past couple days ... I'm not feeling so good at the moment.

Here's a couple of cards made before I was struck down with this dreaded lurgy. 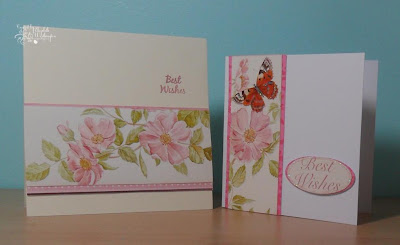 The toppers on these cards were made from the same recycled birthday card just cut in half and trimmed to fit the base. Too pretty to assign to landfill. 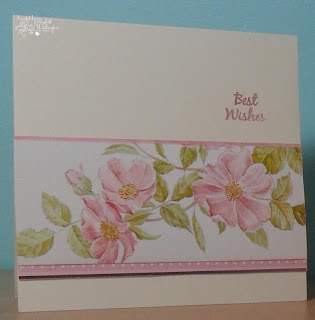 For the base of this one I chose cream card and the strip used to mat the belly band was also rescued from another birthday card. 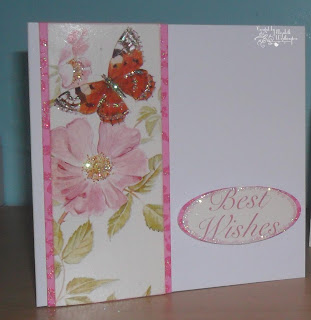 The base of this card is white. A scrap of printed glitter card was used for the matting and the greeting was punched from the original birthday card too. I've added iridescent glitter to the butterfly, rose centres and the greeting/

Materials used:
Of course, I'm submitting these to Di's challenge over at Pixie's Crafty Snippets Playground, Week 68, together with a sick note.

I'll be back just as soon as I'm fighting fit again ;)

Poor thing! I hope you feel better soon...rest up and take care.

Your two cards are so pretty...Thank goodness you recycled that pretty card. Amazing to get 2 out of the one...Yay! The papers are nice and shimmery and you had the perfect backing paper to slide behind the floral!

Such pretty cards! I love the way you recycle your old cards into wonderful creations! Sorry you are not well, I have just gone down with a cold lurgy myself today so I do sympathise. I hope you feel better soon xx

Oh l do hope your feeling better soon l'm missing your wonderful creations already! although what you have produced here are just as wonderful so lovely are the layouts and the butterfly and glitter add to a perfect finish take care and a speedy recovery xx

Two beautiful cards Elizabeth. You have a great knack of recycling bits and pieces. Hope you feel better soon.

Two absolutely fabulous cards Elizabeth - and all from one card, even better!!!

Your snippets prize will be posted tomorrow - hope you're feeling better by the time it arrives.

I'm really pleased with the XCut guillotine BTW, it's the new (so they told me) 13" one all in white. I have to say I dithered about getting an 8.5" one before going to Ally Pally but this fits into the space I had my eye on in the craft room fine. For travelling I think the 8.5" one would be great - although, have you peeked at Joanna Sheen's shop - there's one there that she swears by.

I'm not playing along with WOYWW this week - truly have too much to do so couldn't fairly visit people. Mind you, I still try to visit the bloggers I know well, WOYWW or not!!

Take care chick, and watch out for Mr Postie in a day or two.

Beautiful cards Elizabeth, Love the glitter.. Sorry to hear you are not feeling to good... There are so many bugs around at the moment!! Wish you better... Hugs May x x

Sending "Lurgy-be-gone" wishes your way :)
Your cards are so beautiful... what a pretty duo made from one other card - so clever :)
Bubbles
Playground entrant nos 21 & 23