I know it's been forever but I'm back blogging again and back, too, with a few cards for the Christmas Card Club. Lorraine asked for 'mainly red' this time and I can't honestly say that what I've made fits the challenge so I'm going with the alternative, 'anything goes'. 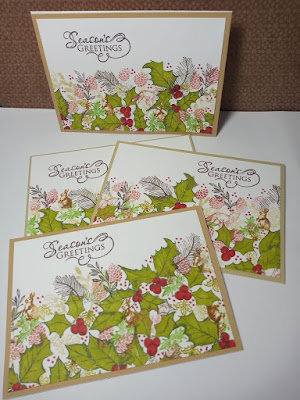 There is some red but not nearly enough. I've used another A4 sized 'one sheet wonder' to make these four cards. 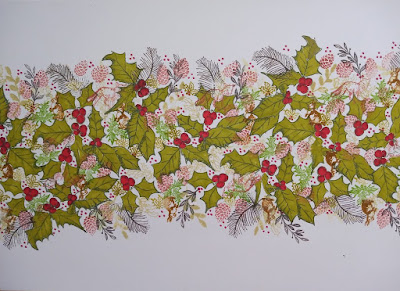 This is what it was like before I chopped it up to create the four toppers. I might just use this photo as my blog header for Christmas this year - it's certainly festive enough. 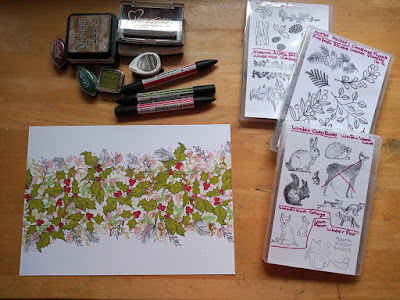 A shot of materials used in the making.
The toppers, once trimmed to size, were matted on to Kraft coloured card, stamped with the greeting and adhered to white card bases.
I hope you will pop over to see what my teammates have created for today's theme. You'll find a list of their names and links on my right sidebar - as always they are so much more creative than I will ever be.
Take care and stay safe,

What's On Your Workdesk Wednesday - Week 586

It's still morning - just! It's been a while ... months actually ... but I'm finally feeling as though I have the energy, and the time, to join in with you all again. Mr W is recovering well from his most recent stay in the hospital - hopefully his last too. Many thanks for all your good wishes. I'm sure they have helped us pull through. Enough of that, it's onward and upward for us from now on. And so to the desk. 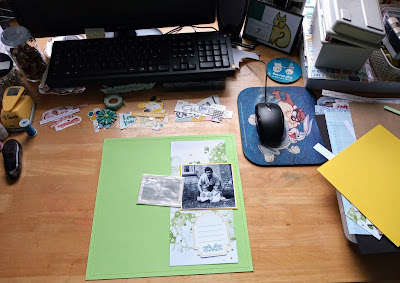 It's looking not to messy this morning. It's taken me weeks to even think about any kind of crafting, be it with paper or fabric even, but I have got back into scrapping. That's mainly thanks to the encouragement of the cyber crops and challenges being organised online by Mind The Scrap, etc.. The virus might have prevented us from going to real live crops but it hasn't stopped us meeting up cyberly - so to speak. The page in progress is one for the family history album (FHA). That's a pic of me and my baby brother with our dad taken in 1949 - so long ago! Here's one I finished yesterday, also for the FHA. 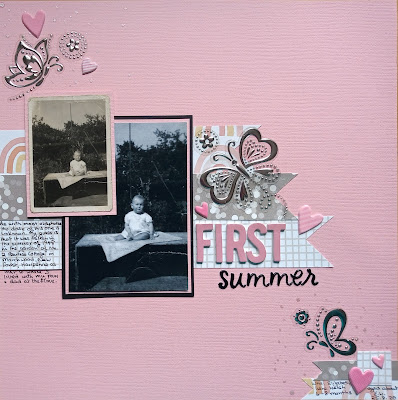 That's me in 1948. I'm somewhere between 6 and 8 months I think. The photo was taken in the back garden of the cottage we lived in then., No. 2 Pear Tree Cottages, Marchwood, in Hampshire, which was as idyllic as it sounds. Because most of the old family photos are very small compared with the 6"x4" we are more used to today, I scanned and enlarged the original sepia photo but included both in the layout. I know it's recommended that we keep the originals and preserve them for posterity but, truth is, it's much more probable that I'm saving them from landfill by including them in my layouts. The completed FHA is more likely to be handed down through the family.
I'm sure I'll get back into the swing of things some time in the future but there's no book bit this week. Instead, I'm sharing this delightful photo of books. 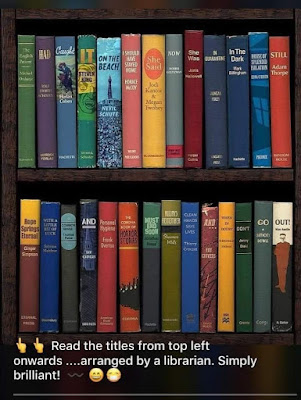 I'm sure some of you will have already spotted it on Facebook but I thought it was so clever it was worth sharing here.
That's it from me this week. I'm looking forward to catching up with you all, over at The Stamping Ground,  but I should say it could take me the entire week to read and comment on your blogs. Apologies in advance but please bear with me ... I'll get to you all eventually.
Take care and stay safe.

In A vase On Monday - Sweet Peas

It's been a while since I last posted anything, let alone something for Cathy's In A Vase On Monday. It's been quite the worst few months for us here at Chez Worthington and, indeed, neither of us has been fit enough to do much more than occasionally sit in the garden and watch the weeds take over. The one thing I did manage to do while he was in hospital, however, was plant out Mr W's sweet peas. I was late which means they are still blooming when usually they would be past by now. 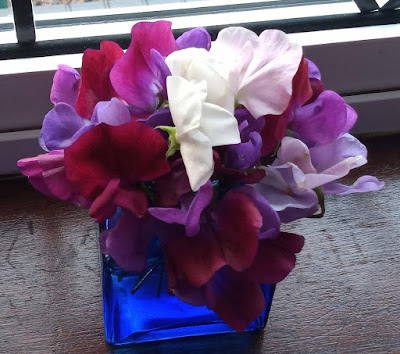 The choice is always for mixed colours but I particularly like that we have mostly dark shades of purple and red this year. There's a few pale lilac and even less of the white, but mostly it's the dark shades - and the smell is divine.. 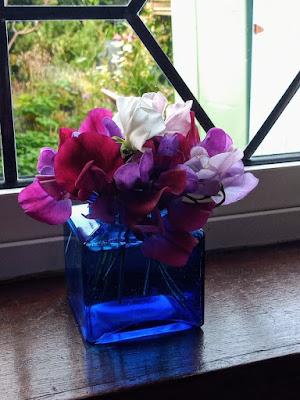 The little posy looks just right in this old blue glass inkwell - a charity shop find from some years ago.

I'm thinking that I will slowly ease myself into blogging again  especially as, while I've been missing in action for so many months, I've returned to find I'm having to work my way round the new Blogger system. As if it wasn't bad enough that we have so many other changes to deal with this year, Blogger decided to give us a few more hoops to jump through. Fingers crossed I've got it right.

Thanks for looking in and do pop over to Cathy's blog, Rambling In The Garden, to see the many lovely arrangements submitted for her meme, In A Vase On Monday.

Take care and bye for now.