I did intend joining in with Annie's Friday Smiles yesterday but, sadly, it wasn't to be. That being so, I thought I'd come in late with what has had me smiling this week.

First up is this photo of my son-in-law, Graeme. 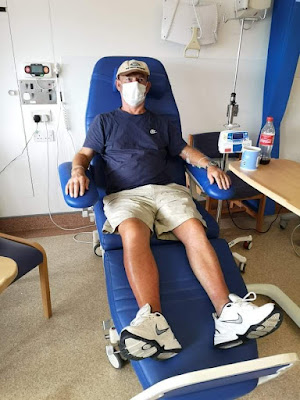 He's had such a hard time of it recently with a really nasty case of infection in his spine. He was first admitted to hospital with it earlier this year and discharged on treatment seemingly on the mend. Then he got so much worse and had to be admitted again to be told he was going to have to stay in hospital being treated with intravenous antibiotics for three months. You can imagine how we all took that. Happily, after six weeks of this his doctors decided that as long as he goes in every day he could be treated as an outpatient. While none of us likes to be in hospital even for  a short stay, for Graeme it's much more difficult because he's deaf and usually communicates with sign language. This makes everything about hospital all the more difficult for him but everyone soon worked out that they could write him notes to help him understand. So, as you can see, he's now back home and just going back for an hour every day for treatment. He's got a big smile behind that mask.

That was the main reason to smile this week but here's a few more from the garden. 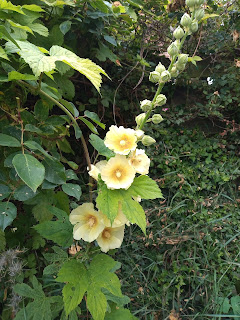 My one remaining hollyhock. The others have been lost to neglect - this last year neither of us has been well enough to tend the garden. I do what I can but it's become very neglected. 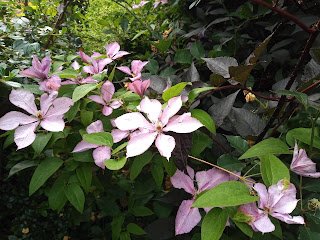 One of our many clematis, this one is Hagley Hybrid, that has climbed through the roses and black elder. I thought I'd lost this one last year but it's just been in hiding. 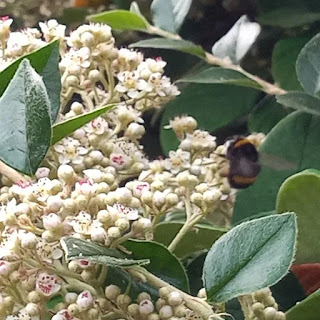 The huge cotoneaster at the bottom of the garden is in flower again and the bees just love those tiny blooms. Every day I go and stand under its branches and just listen to the hum coming from all the insects feeding on it. Bliss!
And finally a funny, 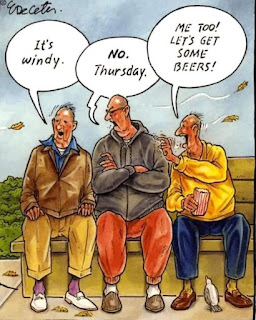 Anyone who lives with someone hard of hearing, like my hubby, will identify with this. Conversations with Alan can be very quirky at times - so much so we just have to laugh at them.
That's me done for this week. Hope what's made me smile has amused you too.
If you are wondering why my signature isn't my usual one on some posts, it's because they are composed on my mobile phone and I don't have access to my PC from here.
Take care and bye for now,
Elizabeth
Posted by Elizabeth at 10:25 3 comments:

Just a very quick post from me today. I'm still working my way through yesterday's WOYWWers posts and commenting - slow but sure. So here's the next scrap page - this one dated 11th March. 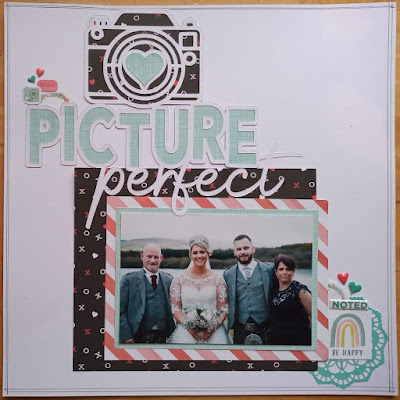 Another photo from the last family wedding, in November 2019, before the pandemic. I wonder now when the next one will be; we do have two engaged couples who have had to postpone their plans because of the happenings of the last year. The stand out feature of this page is the fab die-cut from Peartree Cutfiles. I've been debating with myself whether to invest in a machine to make cutfiles like these but I seriously don't think I can justify the expense and the space. For now, I'll stick to purchasing them as and when needed. Patterned paper scraps and embellishments used are from stash.
Now it's kitten time. 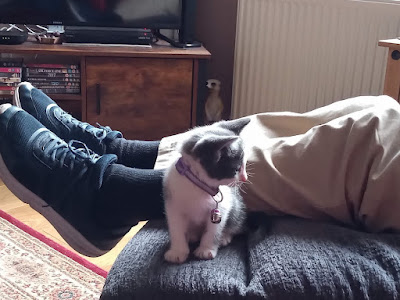 This photo was taken on the first day Silver came to live with us. I can't believe how tiny she was but just look at the contrast between her size and hubby's feet!
That's me done for today.
Many thanks, once more, for your visit and your comments - they are always appreciated.
Take care,

Well, it's been an age since I felt I could participate in Julia's What's On Your Workdesk Wednesday and be able to leave comments too. Now that I'm my hubby's full-time carer, time is scarce but I've managed to carve out some craft time this week. 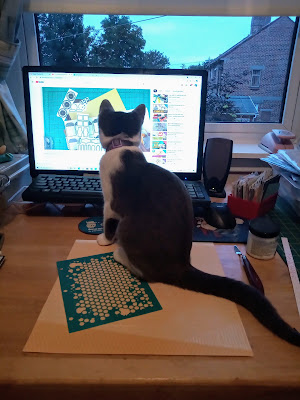 And look what's on my desk. Another reason why scrapping has become a very slow process. Silver can't resist moving pictures, especially any that feature fingers, and inevitably these are in most craft process demos on YouTube. I did finally complete the page she's sitting on this afternoon. 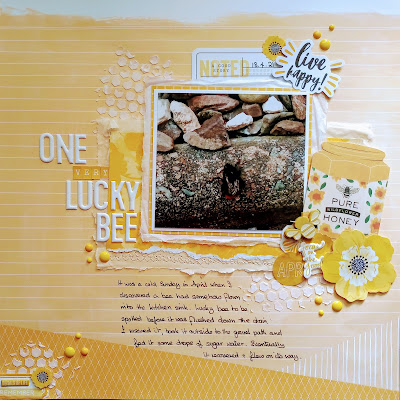 I made this for the Summer Challenge at Mind The Scrap over on Facebook. It's made from a combination of leftover scraps, a patterned paper, a Vicki Bouton Hexagon stencil and white puffy alpha stickers from various MTS kits. All other materials, except the bee, from old stash. 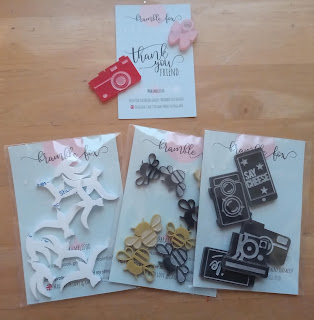 The bee is from one of Bramble Fox's lovely collections, so nice I simply could not resist. There goes the spending freeze I've been on for ages. The others are cameras - I always think that you can't have too many camera embellishments - and seagulls. Living in a seaside town seagulls are a fact of life. They are also noisy, dirty and downright dangerous during the breeding season but a sea themed page wouldn't be right without them.
That's me done. It's good to be back and I will do my best to comment where I can even if it takes me all week.

Kitten in a Basket

Hope this finds you all well and enjoying whatever season you are in at the moment. Here in Scotland it's summer and it's been scorching but I'm glad to say it's just a bit cooler today - just how I like it.

I have the briefest of posts for you today with just this fun snap of Silver, the intrepid kitten. 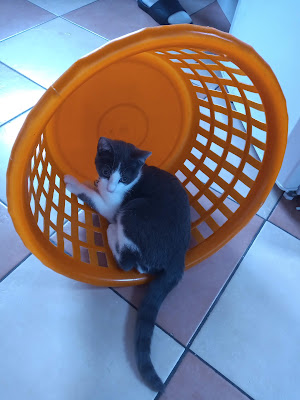 She loves climbing into the washing basket and rolling it around the floor.
That's me done for today. Endeavouring to be back tomorrow, all being well.
Once again, many thanks for visiting, any comments are much appreciated.
Take care.
Elizabeth

In A Vase On Monday - Sunny Sunflowers

It's Monday again. The day I often show a vase full of flowers and foliage from the garden but today's different. 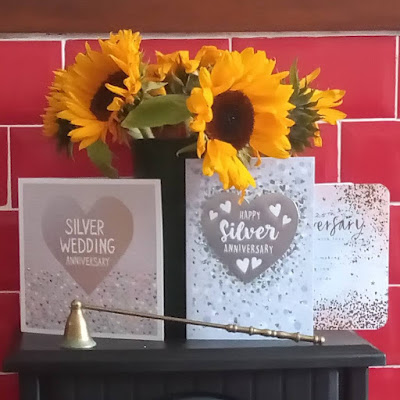 These sunflowers are all that's left from a beautiful bouquet I received from my husband on our 25th wedding anniversary which was last Tuesday.

I seem to be on a bit of a blogging roll at the moment - nice - let's see how long it lasts! 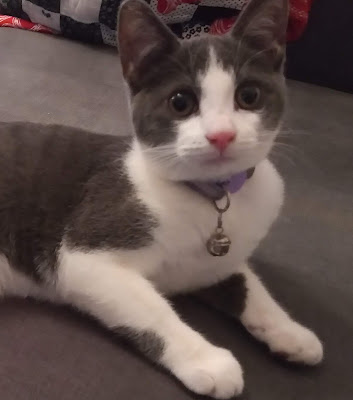 That's it from me today.

Thanks for visiting and, as always, any comments are much appreciated.

Email ThisBlogThis!Share to TwitterShare to FacebookShare to Pinterest
Labels: in a vase, kitten, Silver

Surprise, surprise! Posting two days on the trot is almost unheard of these days but I'm hopeful I'll be able to surprise you more and more as things get easier around Casa Worthington.  I can but hope. So here's page #24 in the backlog of scrap pages. 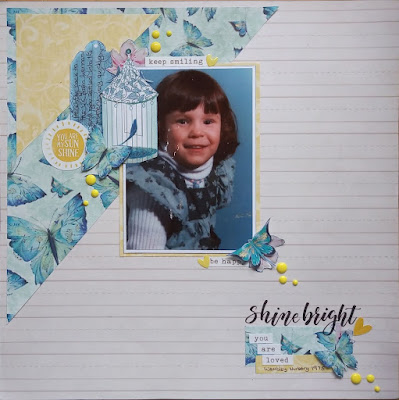 The photo is of my daughter looking incredibly cute for a school photo day. The little dress she is wearing was made by yours truly back in the days when I did a lot of dressmaking. It's in a style that was very fashionable then - think 'Little House on the Prairie'. It has the addition of a front pocket for her to keep the body worn hearing aids she had back in the 1970s. She was the happiest of little girls despite her disabilities.
The patterned papers were, I remember, freebies in a scrapbook magazine that's now no longer published. I fussy cut some of the butterflies from the paper for embellishments, as was the birdcage which I have placed cunningly to cover most of the damage up in that corner of the photo. I know I might have been able to Photoshop the damage but I decided that I wanted to preserve it as is for sentimental reasons ... it was one of the many photos I took with me to Wellesley College, MA, US, when I studied there, and so got taped up in a collage I had on the door of my room. My fellow students all had similar collages on their doors.. It was they who introduced me to their style of scrapping - absolutely nothing like the scrapbooking I did as a kid in Scotland!
And finally, here's a kitty photo for those of you who love cats. 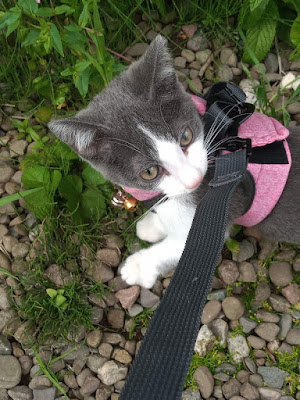 I'd like to say she took to the harness and lead like a duck to water but, no, it was never going to work. This little kitty has a mind of her own and it doesn't embrace being trussed up. She now goes out unencumbered but she's so nervous she will only go out as long as one of us is there to escort her. Funny wee thing.
That's it from me today. Hope you are all having a wonderful Sunday.
Many thanks, as always, for visiting and any comments are much appreciated too.

Happy Saturday to you all. As the situation here hasn't changed all that much since I last posted I won't dwell on it, except to say I haven't made a scrapbook page in forever! So I'm still posting pages made way back at the beginning of the year. Here's #23. 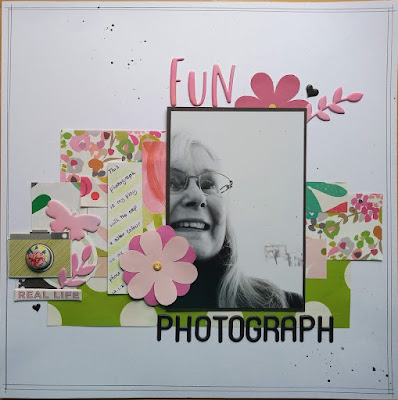 The photo, as if you couldn't guess, is a selfie. I'm not very practiced in taking selfies, mainly because I'm not keen on photos of myself anyway, but after this one was cropped and changed to black and white - the fun bit - I decided it wasn't too terrible. I've used several pretty patterned paper scraps for the layout; the large pink flower was punched from scraps too. The other embellishments and alphas for the title were from old stash. I tried my hand at framing the layout with black pen lines - one day I'll get those lines right!

I'm actually stealing time today to be here in the craftroom hoping to actually make a page or two. As long as there's not too many interruptions from our 'toddler' kitten ... she's clearly reached the terrible twos ... I should be okay. 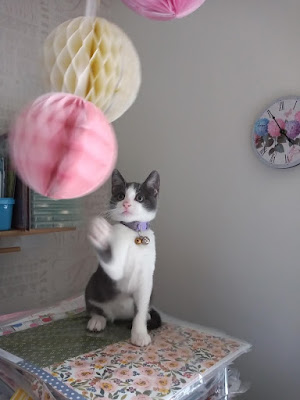 Here she is in the craftroom, on top of my turret of patterned paper, batting my decs and totally unaware that she could bring the whole lot down like a house of cards.

That's it from me today. I hope you are all well and if, like us, 'enjoying' extremely hot and humid weather, you are staying hydrated and slapping on the Factor 50.
Many thanks, as always, for visiting and any comments are much appreciated too.

In A Vase On Monday - Minty Peas

Long time no see. We're still living, and dealing, with the affects of Long Covid so there's very little time/energy/inclination for flower arranging, not to mention all the other associated pleasures of gardening. The EM has been in hospital again, this time with severe heart failure. He's improved but is by no means recovered. It will take time. 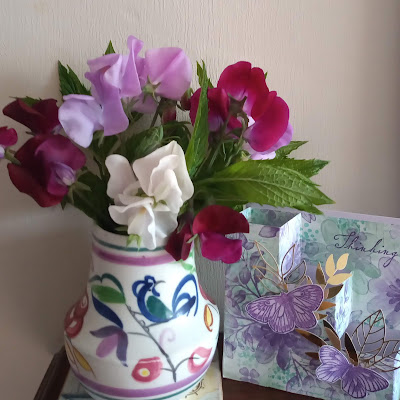 One of the EM's favourite vegetables is garden peas with mint and thinking of that led to today's title. The idea of putting the two together was inspired by the pot of sweet peas growing slap bang in the middle of the mint which I suspect has been established since the 1950s, when the house was built. I thin it out every year and back it comes as prolific as ever.
For the vase enthusiasts, this one is from a set of two manufactured at the Poole Pottery. They were bought for the bargain sum of 50p at a church table sale about thirty years ago.
That's it for now. Thanks for visiting and commenting - so much appreciated, especially during this difficult time, when I'm finding it difficult to interact as I would like. I hope you all understand.
Bye for now,
Elizabeth
Posted by Elizabeth at 15:53 3 comments: