In her post on Wednesday, Ros, Wild Cards on my Workbench, asked if anybody had any suggestions for interesting things to do with egg whites. Apparently, she had some egg whites over after making passion fruit ice cream - sounds yummy :)  Yesterday I remembered that a dish called Apple Snow was a great favourite with all of us when it appeared on the school dinner menu, and one of the ingredients was whipped egg white. 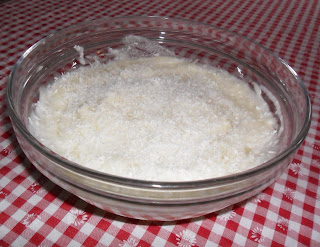 Basically, it was apple sauce with whipped egg white mixed through - a very simple dish, but light and fluffy and delicious. I don't have a recipe so I've made it from memory, guessing at the ingredients and quantities ... I have to say the Quality Control Department, aka DH, gave it the thumbs up at dinner this evening:)

At school it was always served with a topping of crushed cornflakes - I've substituted dessicated coconut ... in keeping with the snow theme. Sadly, it doesn't photograph well, but I did try to get its best side - here's it served in a sundae dish. 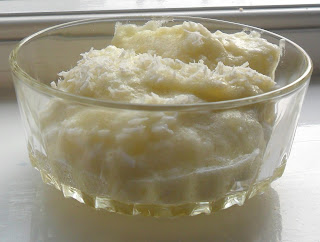 Apple Snow
Ingredients:
For apple sauce:
For the whipped egg:
Topping:
Method:
For a quicker method, and a smaller quantity, you could use a jar of apple sauce as the basis, but one egg white should be enough.

My apple snow is very white, as snow should be, but the school version, as I remember it, was a lovely pale green -  perhaps food colouring was added. There wasn't the food additives awareness then as there is today.

It's now after midnight so I'm off to bed. I have a card to post but it will have to be done tomorrow as I'm bushed - at my age I need all the beauty sleep I can get too :)

Ooh thank you Elizabeth.
This takes me back to home cooked dessert when I was a kid. I must honestly say I'm arfully tired of the great Aussie pavlova. I don't have such a sweet tooth.
I've also come across using the egg whites to make lemon gelato or water ice. Since we have a million lemons on the tree, I'll give it a go. Thanks again for the recipe.
Ros.

Hi Elizabeth! Coo, this brought a load of memories rushing back - I learnt to make this in DS (Domestic Science) classes at school more years ago than I care to remember :) We did add a tiny drop of green colouring too. Thanks for the blast from the past - I remember it was light and fluffy! Have a nice day! Di xx

Tried and tested recipes are always the best .. .. especially those from way back .. .. they always seem super scrummy!!

Hope you are having a good weekend.

Wow that's a blast from the past it was always a great favourite at school but we called it Swedish Apple Charlotte and yes it had the crushed cornflakes on too!
Carol Ann x

Hi Elizabeth thought I had the wrong blog for a mo what with thecrecipies and all. I remember apple snow at school but ours was more like apple slush ! Yours looks scrummy though.