It's a long time since I did a Foodie Friday post - not because we haven't been baking and cooking, but because I keep forgetting to take photographs :) Time to put that right and here, by popular request, is the EM's recipe for boiled fruit cake - a war-time recipe he has adapted and now bakes for all and sundry. 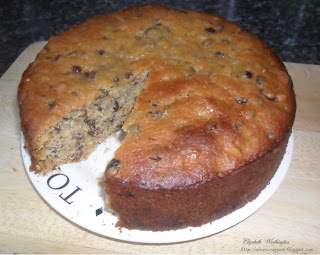 1. put margarine, water, sugar, fruit in pan. Bring slowly to the boil, turn down heat and simmer for 20 minutes.

2. allow to cool, preferable for a minimum 4 hours, overnight is ideal. When cool, stir in egg and flour. (as an extra nice touch 2tbs of runny honey can be added here). Mix well in the pan.

4. When baked, remove from oven and leave to cool in the tin. Once cool it can be removed from the tin and eaten  - enjoy!

Angie, aka Shozzy, has already given the cake her seal of approval. She says that it is moist but not stodgy, and I can second that. It must be the boiling of the fruit that keeps it moist. My daughter makes an eggless version, made with tea instead of water, and I'm told that's good too.

Notes:
After the first 30-45 mins, you might want to cover the top with a couple of circles of baking paper to prevent over browning. The need for this really depends on what kind of oven you have ... ours is a very temperamental fan-assisted oven which waits for us to turn our back for a moment and then burns the top.

Because I have impaired glucose tolerance, I have to ration the amount of cake I eat (sigh). The EM has no such problems so can enjoy as much as and whenever he likes. However, our lovely niece, Louise, is insulin dependent diabetic and my brother has also developed diabetes so experimentation is going on - well the EM is a retired chemist so he would experiment anyway.

So, for the latest cake, he has substituted Half-Spoon for sugar hoping that it won't spoil the texture or taste. I can't tell you yet how successful this has been because I'm not getting to try it :(  No, this time it's Louise who is going to be chief tester. As soon as she has reported back, I'll let you know whether the experiment has been successful or not :)

Should you now abandon your craft desks and rush to the kitchen to try this recipe ... how likely is that ... do let me know what you think - I'm sure the EM would appreciate the feedback :))

Right, I'm off to have a very late breakfast ... I've been up since 5.30am, almost 5 hours, fed the cat, had a cuppa and started to put together a scrap layout, but only just started to feel hungry ... must be all that talk of cake :))

Email ThisBlogThis!Share to TwitterShare to FacebookShare to Pinterest
Labels: baking and cooking

Sounds like a great recipe. Won't be made in this house, I'm the only one who eats fruit cake out of 6!
And if it's as good as you say I'll eat it all in one sitting! !!!!

Gorgeous looking and sounding cake Elizabeth. My Mum used to make boiled fruit cake all the time when we were kids, it's great with a piece of Cheshire or Wensleydale cheese.

Have a good weekend xx

Ooo! I love boiled fruit cake. I shall borrow this and make one on Sunday if I am not too tired after tomorrow playing!
Hugs
xx

Elizabeth this looks and sounds delicious!! thank you for sharing the recipe l'll be trying this one xx

I have tried this and it is so yummy ....cake never lasts in our house but the last slice is even better than the first.xx