Well, it is still Wednesday but I'm running really late today. I don't think there will ever be any chance of me getting to be 'numero uno' on Julia's list. If you are wondering what this is all about, Julia is the organiser of What's on Your Workdesk Wednesday, an international desk hop you will find access to on her blog, Stamping Ground. 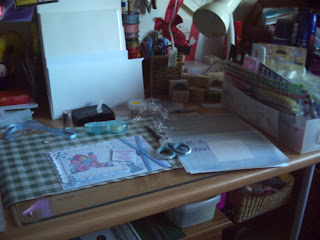 So here's what my desk looked like first thing this morning - just as it was last night when I called it a day. Yes, no little brownies came in during the night to work their magic and clear up.  There's some silver snowflake trim that I thought about using but decided against so really should be put away. Scattered around is the detritus that accumulates around me while I'm working. The bunch of stamps are there because I have plans to use them and the embellishment box is full of assorted Christmassy stuff - I'm keeping it separate from all the other embellishments just to save wasting time looking. Mostly, what's on the desk is the card I was working on, off and on, yesterday so you can see the topper sort of set out ready to stick down. Under the scissors is the card base and the insert ready to stick inside. 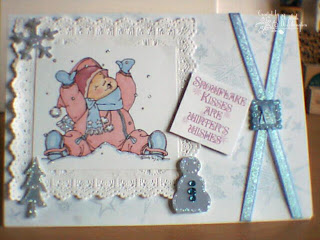 The image is another Mo Manning digi , Kai in the Snow - love it - coloured with Promarkers as usual. When I saw the 'Snowflake Kisses' sentiment on Sentiments 4 You I immediately thought it would be great with this image. 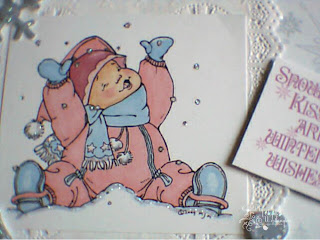 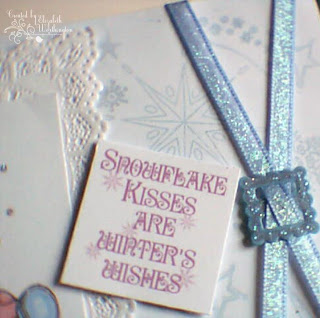 I made the background by stamping a mix of snowflake stamps with Versamark and then brushed Forever Blue Perfect Pearls all over - another first for me. I altered the 'Snowflake' digi image from black to pink before printing out. There's not much more to it really, a square doily, some die cuts - snowflake, fir tree, snowman and a buckle all cut out of blue pearlescent paper - and some really pretty blue iridescent ribbon from my stash. The image and the die cuts got the glitter treatment.

I decided to make the card tent shaped like this: 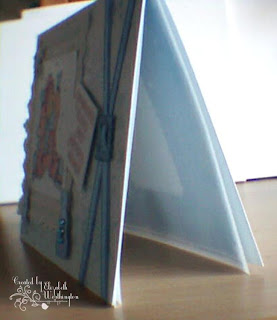 Because I didn't use a design paper for this card I decided to print out a vellum insert using one of the Bearly Mine Design papers. I used the digital punch to cut out a square to write in and added some text saying 'Let it Snow'. 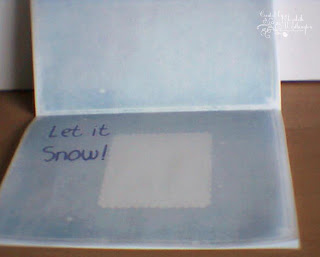 Oddly, although this card is intended for a baby girl, there's a lot of blue in it. I think too much pink just would not have looked so good.
A short weather report - still old snow lying and ice here which is affecting the M77 badly and stopping mail from getting through although DH is able to drive down to the supermarket. Which is just as well as we were getting very low on tea and I only function on tea : )
Off to get my next cuppa,
Elizabeth
Posted by Elizabeth at 14:35

Such a pretty card!

gorgeous card elizabeth.the image is so cute and i love the pretty soft colours :D

Gorgalicious card, thanks for the peek and sharing! Hugs, Marjo #45

Beautiful cute card ,thanks for showcasing have a good week
hugs judex#6

Elizabeth your card is lovely and it took a lot of thought and creativity to make it. Please don't say "there's not much to it...", as most times simple designs are the best designs! Thanks for the peek, and thanks for stopping by my desk. Happy Late WOYWW! #11

Lovely card, thanks for sharing your workspace

Great card Elizabeth, I love this image! Thanks for visiting my blog... it's amazing how many people seem to wake as early as I do!
Chrissie #7

A beautiful card Elizabeth. Your desk is very tidy. Thanks for popping past my desk and for your lovely comment.
Susan xxox #13

"not much more to it..."? You did lots of lovely steps on this card and it shows! Just gorgeous. Hope you got your tea and thanks for visiting me this week.. *smile*
#23

The pearls look great, as does your coloring! Wow. I really like your card - fabulous! Thanks for visiting my blog already.

Lovely card Elizabeth, I keep my Christmas stash and paper separate from the rest of the stuff for the same reason as you do, just makes it easier.

Love your card ~ funny you should use the word detrutius? _I have only just come across this on another blog never heard it before lol ~ Ernies bits turned up in the post yesterday morning so tomorrow I will fix him ~ thanks for visiting my blog Nicky 16

Hi, sorry I'm late internet problems. Just love your card, colours are fab. Cute baby, yes the words are beautiful too. Have fun. Hope the snow clears up a bit for you. Big Hugs JO.xx**22**

As I am late I had a peek at other posts too - up and down - love your cards!
Hugs,
Cardarian