My second card of the day and it's a card for my brother, Douglas, who loves all things Scottish and who, although brought up in a city, is very much a country boy at heart so I thought he would appreciate this Sheena Douglass stamp, 'Nature'. 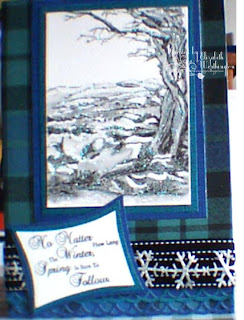 I stamped it onto watercolour paper with Tim Holtz Black Soot distress ink and following Sheena's instructions dried the image off with the heat gun then went over the image with a damp paintbrush - a scary new technique for me. I let it dry then, because I wanted a real wintery scene, used a Versamarker pen to pick out the hilltops and spots where I thought snow would lie and embossed those areas with Seafoam White powder from Papermania.  I frosted the picture using a glue pen and white irridescent glitter. 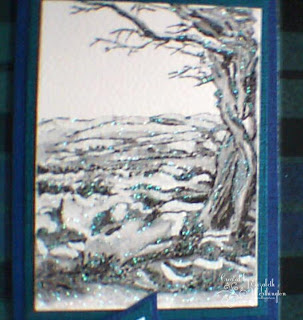 I hope you can see that the frosting sparkles in blues and greens. Because my brother's health has not been so good over the last year but is improving the 'Nature' sentiment seemed to strike just the right note. 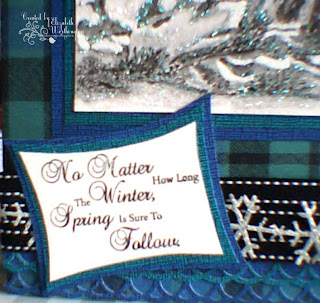 Other materials used: tartan patterned paper for background, blue and green card for matting and punched trim, and silver/black peel-off trims were from my stash; black stitched ribbon (all three rows of it), and silver snowflake trim were from Funky Farm Scrapbook Barn.

For the inside I designed a matching digi sentiment on my computer by scanning the tartan paper and using the digital punch feature to cut out a centre square and a frame and added the 'Happy Birthday' text. 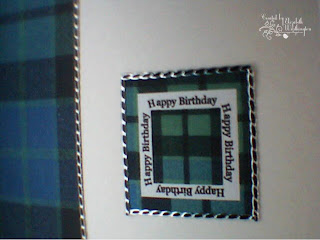 Douglas lives in a small village in the Scottish Borders. Up until a few years ago he and his wife owned and ran the local village shop which served the community. A local artist, Lucille M Fenton, spotted him in his kilt and asked if she he would let her do a painting of him - here is a photograph of the painting: 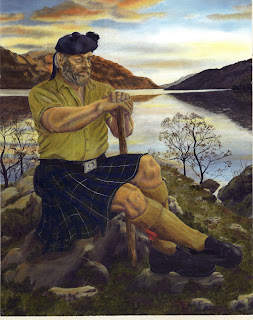 He is wearing the tartan of the 1st Battalion of the Cameronians, (Scottish Rifles) the regiment he served with until, sadly, it was disbanded in 1968. The beauty spot he is posing on is somewhere in Berwickshire. I think he looks like a man in his element.

Hope you liked my card and the painting. Feel free to comment on either or both.

Bye for now
Elizabeth
Posted by Elizabeth at 23:18

Hi Elizabeth really love your new card beautiful your brother will love it ,and what a wonderful painting that has been done of your brother somthing to keep .I wonder if you could help me I have just started my blog as i am a novice how did you get your lovely fancy signature I have put me down as your folloer so you can get in touch with me .take care Jeanxx

Elizabeth
I found your blog thru the comment you left for me on my WOYWW post... Thanks for your kind words...
But I've been looking thru you blog and having a ball see all the different things you work on... what fun.
This card for you brother is just Beautiful. I love the sean and the technique with the damp paint bruch over the stamped imige... Very nice! I know this is an older post but had to comment on this one.