... Julee over at Poetic Artistry!

With my mojo firing on less than all cylinders, I was blog hopping looking for some inspiration when I found Julee's latest creation here. I liked it immediately, it was just the design I was looking for, so I CASEd it! Here's my card. 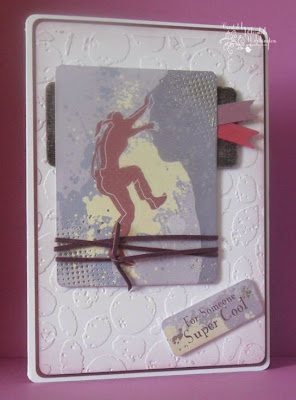 If you popped in on Wednesday to check out my WOYWW desk you will recognise the topper and some of the cardstock. I was trying to decide what colours would look best with the image of the rock climber and as I mentioned on Wednesday, photographing the cardstock spread out on my desk really helped - something for me to remember in the future.

Here's how I made the card: 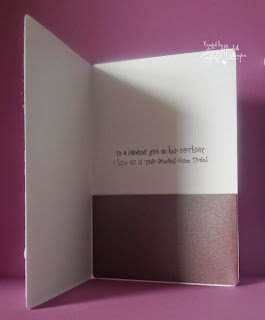 A little pocket, created from the mauve cardstock, was added to the inside - perfect for adding a gift card - and a sentiment from the Happiest Birthday Wishes set (My Favorite Things) was stamped in black. 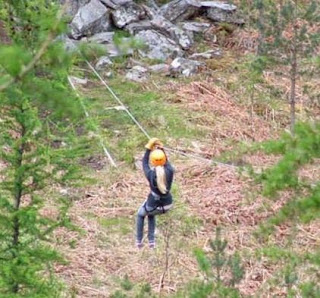 I made this card for my granddaughter's 15th birthday. As you can see from this photo, Jolene is a bit of an action girl and her ideal birthday treat is to spend a weekend in Aviemore, in the Highlands of Scotland, trying out all the various thrilling activities on offer there!

Had another busy day today. We went shopping for new curtains for our newly decorated bedroom then, as we were so near The Range, just had to pop in there ... it would have been rude not to :) A crafty haul and several £s lighter we came home to potter - read weeding out the ground elder for potter - in the garden. It's been such a lovely sunny day, you'd hardly know that it's a bank holiday weekend :)

Hope you have had an equally lovely day too. Thanks for visiting.

Great idea for a teenage card and I like the internal pocket too.