Time for another Friday Smiles post - courtesy of Annie at a Stitch In Time. I did intend getting here earlier but the dreaded H-word raised it's ugly head again and detained me. Washing is now in the machine, bathroom is sparkling and the bed is made - so far, so good. 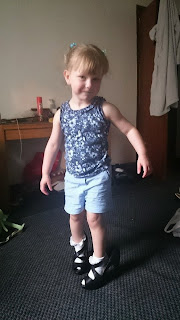 Now, on to a few things that have made me smile this week. The great-grands have been having a lively time of it so plenty to share. Arihanna, especially has been having fun with her mum's high-heels ... here she is modelling them for a photo shoot :)

There's been a bit of a trend for amazing pony tails among the great-grands this week. First up was Arihanna - apparently she had to be bribed with sweets to pose for this photo. Photos taken by her mum, Louise. 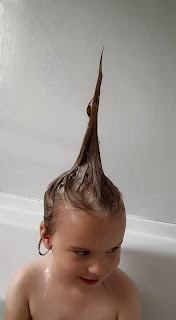 Then Rhian had to have a go at hair-raising too :) This photo was taken by her gran, Juli, who tells me Rhian, who can be a bit camera shy, was actually looking at her hair in a mirror at the time and didn't notice her gran had the camera out! 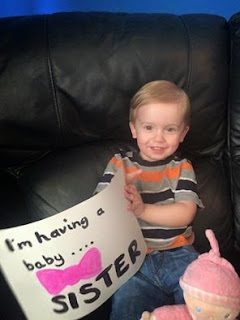 Brodie doesn't have that much hair so no hair-raising for him, but he did have some fantastic news to pass on to me via Facebook. Yes, the newest baby expected in October is a girl. Rhian is super delighted because she forecast that she was going to have a sister weeks ago :) 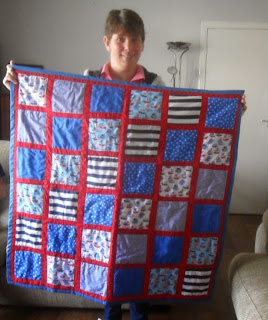 Finally, my daughter, Juli, has been busy creating this lovely quilt for the other expected baby, a boy, that is due at the beginning of June.

These two will take the count to four grandchildren for Juli and as many great-grandchildren for me - two boys and two girls - you'd think we would be accustomed to it by now, but each one brings their own special joy :)

That's the photo smiles for the week. It just leaves it for me to tell you this week's joke ... this one is another from Donald's farm. Apologies in advance to those who have trouble with the Scot's language!

Donald was away at the Oban Cattle Sales for the day, when his neightbour, McLaren arrived in the yard and parked up his old Land Rover beside Donaldina, Donald's oldest daughter.

Donaldina, who was mucking out the byre, replied, "Nawe! He's away at the Sales, but if it's the Ayrshire Bull service you want, then it's £50!"

Nawe!, it's not that", barks McLaren.

"That's not whit I'm here fur", roars McLaren. "Your brother, Sandy, has put our wee Fiona in the 'family way', and we want to know what Donald is going to do about it?"

"Ochone, ochone", says Donaldina, "you'll have to speak to Faither yourself - I don't know what he charges for Sandy!!!"

Happy Friday and have a wonderful weekend.

Lol - and I even managed the language too! x Jo

So many gorgeous photos today Elizabeth and what wonderful news too. Had a realy chuckle at this week's joke :-) Thanks for sharing.
Hugs,
Annie x

While I was visiting from WOYWW, I thought I would stop by for Friday Smiles. I keep forgetting that Friday comes so early in my part of the world.

That's some real hair raising fun you had with these adorable great-grandies. And that is an adorable quilt your daughter made.

Although I don't really speak the Scot's language, I certainly got that joke. It was side busting, too.

You asked about a lasagna garden. It is where you begin with cardboard or overlapping newspapers laid down as a weed barrier. Over that, you place green matter, like grass clippings, or other green waste. After a good soaking, add brown matter, like leaves. Soak. Then start again, this time without the cardboard, but add some paper, which can be shredded or still intact. Then a green layer, then a brown layer. Keep this up until you have built up your garden enough that you will never have to mulch or weed again. If you do an internet search for lasagna gardening you will find a few people are doing it, but it hasn't caught on by mainstream gardeners. Thanks for asking.

Hi Elizabeth. What adorable great grans. I remember having little pony tails and molding my hair in the bath in all sort of shapes.

Had to laugh at the joke.... The language was interesting but I definitely got the punchline!!
Thanks for stopping by.
Hugs
Kay

What delightful photographs, they make me smile as well :o)
Jackie xx

Lovely family shots Elizabeth. My first grandchild is due in 8 weeks, an exciting time. Although I'm not sure I feel old enough to be a grandma yet!
Great joke, had me chuckling.
Hope your weekend is a good one :)

What a happy set of photos, and great news about Brodie´s sister. Your right, a new baby always comes with their own parcel of love and joy.
The joke made me chuckle too , so Thanks for the smile. Kate x