In A Vase On Monday - On Day Late

After a very busy day which took me away from home yesterday, this post is now a day late! Still better late than never ... though I can hear my mother's rejoinder to that ringing in my ears right now, 'better never late'!!! And because I know some of you come visit just to see what I've been out and picked from my garden, I'm hoping both you and Cathy, our inspiration behind this meme, will forgive me. 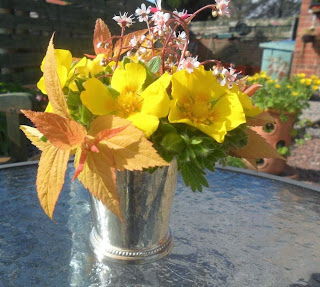 I did have to dodge the showers to pick this posy of sunny yellow Potentilla aurea.

I've had this plant for a good number of years now, indeed it's been with us through many a house move and transplanted from an English garden to several Scottish ones, struggling in some and doing better in others. 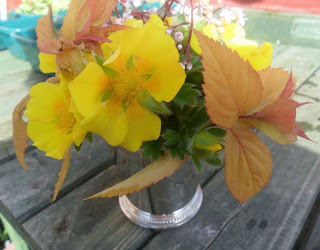 When we made the last move - our final, for sure - I popped it into the top of a herb pot (the herbs being long gone) and there it has stayed. It must like it there because it's blooming beautifully this year, better than it has ever done before! Spot it in the background of the photo above. 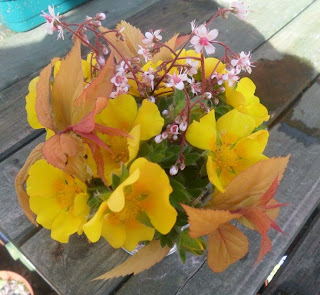 I've teamed it up with a few pieces of Spiraea japonica 'Gold Flame' - the leaves are a pretty combination of gold and pink at the moment - and the dainty pink flowers of Saxifraga. I have two varieties growing together in the rose bed, as edging plants, the one most commonly seen, Saxifraga x urbium, and the other Saxifraga umbrosa 'Variegata'.

It's another favourite flower from my childhood - I don't think there was a garden in our neighbourhood that didn't have this plant growing in straight lines, edging the sides of the paths that led up to the front door. Although they are most commonly known as London Pride, ever since I was a wee girl I have thought of them as Pretty Maids All In A Row ... my very own interpretation of the line from the nursery rhyme, Mary, Mary, Quite Contrary!

The vase used today is a tiny silver julep cup - another purchase made from the Handpicked Collection the site discovered after Cathy mentioned it in a previous post - the perfect size for a posy of tiny flowers such as today's choice. 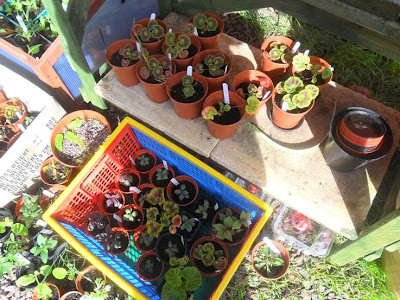 It seems that after a couple of glorious weeks in April we are now having all her showers in May!  Which is why these geraniums and antirrhinums are still sheltering under the potting bench, just crying out to be potted up. Just a couple of dry sunny days are all that's needed ...

... however, all those showers do mean that I don't need to feel guilty for spending so much time watching the TV coverage of The Chelsea Garden Show!

Oh, ho! The sun has come out ... hope it's for more than the usual half an hour :) If you have enjoyed seeing my vase and want to see more Monday vases do take a tootle over to Cathys at Rambling in the Garden.

Such a pretty vase of flowers Love and hugs Carole x

I'll go along with "better late than never", this pretty little arrangement is well worth waiting a day for :o)
Jackie xx

I have not heard that rejoiner before, but I suppose it does make sense although I suspect we all have a tendency to be either early/late/or just on the dot people. I suspect I am the latter - too busy to waste time being early!! Your little vase is so pretty, although the scale is deceptive and on first glance it looks much bigger than it is. The spiraea is the perfect foliage to complement the colour of the potentilla - and you have reminded me of the 1:12 scale model of my bedroom I made which I mentioned in a vase post where I included a teeny tiny vase of London Pride! Thanks for sharing - whatever day it is! Oh, and I'm glad you found Handpicked useful!

Hi Elizabeth I really like your golden leaves. Its still coldish here too, despite the sunshine!I will try taking photos of the vase outside.