In A Vase On Monday - Rosy Glow

Although it's not an official Bank Holiday here in Scotland, the children still had to go to school as usual, it seems many did have the day off. The weather was perfect, dry and sunny, so we took ourselves to Culzean Castle Estate for a wee stroll to admire the bluebells - spotted a cheeky pheasant too :) We also popped into the bookshop where I was delighted to make a real find, a very old (1973) copy of Cottage Garden Flowers by Margery Fish. It's now next on my reading list, just as soon as I've finished the very entertaining The Transplanted Gardener by Charles Elliott! On the way back to the car I spotted a display of plants from Culzean's walled garden for sale which I just could not ignore ... I now have two new plants, Thalictrum Glaucum and Centaura Dealbata. 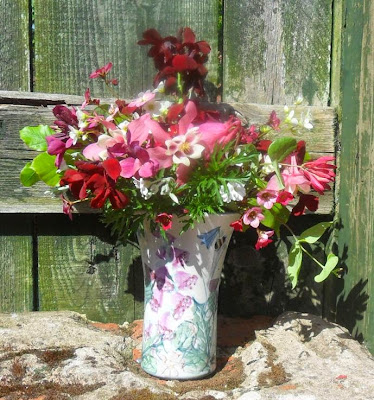 Once home, the plants were popped into the nursery area until I decide where their permanent home will be, and then it was a ramble round the garden to see what I could pick because it's Monday and it has become the norm for me to join in with Cathy's meme, In A Vase On Monday. Although each week there's more flowers blooming in the garden, there's still not a huge amount to pick from, probably because of the cold snap we've been enduring these past weeks. However, the dark red wallflower, Erysimum, has been catching my eye for some time so that's where I started. 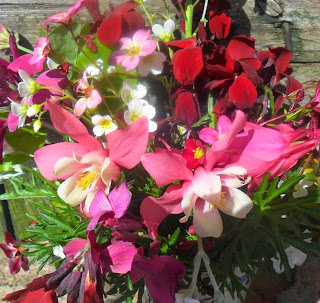 I could see that there wasn't much point in leaving them for much longer as they will soon be going over so I picked a few and added some stems of pinkish/purplish ones. Then it was a case of looking for anything that would look well with these colours ... so I added a few Aquilegia Spring Magic, Rose and Pink, growing in the alpine bed, Saxifraga arendsii, Carpet Pink and Carpet White, and a few sprigs of Cerastium tomentosum, Snow-in-Summer, just coming into bloom. 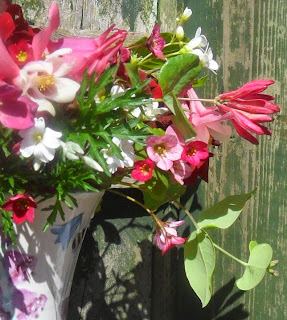 My choice of foliage is Honeysuckle, Gold Flame, a few frothy leaves of Malva Moschata, Musk Mallow, not yet in flower and just a couple of pieces of my tiny, but treasured, green beech, Fagus Sylvatica, discovered and brought back from a nursery on the shores of Loch Ness. 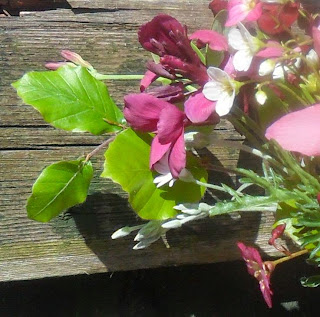 Every year I eagerly await the fresh and soft green leaves of spring on this lovely tree.

The photos were taken in our back garden, vase perched on top of the red brick wall with a backdrop of the old green wooden fence. My husband keeps threatening to pull it down but I like the aged appearance of it. Somehow, I think a brand spanking new fence would not be the same!

If you liked my vase this week, you might like to pop over to Rambling In the Garden where you can not only see Cathy's gorgeous purple storm in a teacup but also check out many other vases too.

In the meantime, I'm off for a cup of tea.

What lovely plants and flowers! I probably would have bought them too if I'd seen them :)

It's always worth looking through the bookshops at places like this, isn't it? Glad you had a good day out. Your blend of flowers in the vase are lovely - none of my aquilegia are in these sorts of colours so it was a refreshing to see yours and the wallflowers and other bits are perfect with them. I keep looking at my wallflowers and thinking about cutting them right back to try and get some fresh shoots as they are really woody - not done it before. Thanks for sharing.