It's a beautiful day here, perfect for sharing a smile or two with Annie at A Stitch In Time. 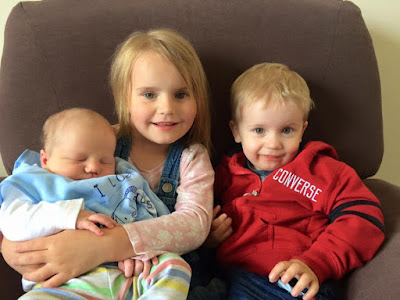 My three beautiful great-grandchildren! This photo not only made me smile, it made me burst with pride - they are so gorgeous :) 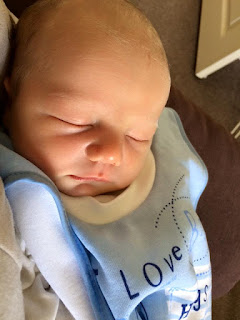 I could share so many more photos taken this week featuring this gorgeous little chap and his now completely besotted parents, grandparents, great-grandparents, uncles, aunties, cousins, even a great-great auntie, but I'd risk boring you to death so I'll spare you ... for now :)

Instead here's the joke of the day and it's the latest from Donald's farm.

Whilst his wife, Big Maggie, was in America, Donald employed a pretty young Housekeeper. One Sunday Donald's Aunt Ina came for lunch and upon seeing the young, and very shapely, Housekeeper gave Donald that look (you know the one I mean!).

Donald asked his Aunt Ina, "Why are you looking at me like that?"

Donald assured his aunt that their relationship was strictly professional.

A couple of days later the Housekeeper told Donald that there was a silver jug missing since Sunday, and putting two and two together, Aunt Ina became the prime suspect.

Donald decided to write her a letter. He wrote as follows:

A few days later the replay came from Aunt Ina.

Did you enjoy that? I certainly did the first time I heard it, and it still made me smile when I typed it out :)

Hope you all have a wonderful weekend and that the week ahead brings you much to smile about.

I'm chuckling at your joke of the day Elizabeth and have a big smile on my face at your gorgeous family members....there really is nothing like the joy that young family members give us is there? Thanks for sharing.
Hugs,
Annie x

I don't know why you don't see Mr Linky but I've linked for you :-)
Hugs,
Annie x

Thank you for sharing these photos of your beautiful great-grandies, they all look adorable.
Your funny story made me smile too.
Jean x

Last week's post was the first on your blog when I clicked your sign in!
Glad I returned for this week's. Oh, that's a good one i must remember! Just love the photos of the children but the babe is adorable. I'm a softie for them especially as my lot are so far off. Will be seeing all of them soon though.
PS the Monkey Wrench Block has an interesting tale. The slaves in America used the shapes as codes to aid their escapes. e.g.., a tumbling block indicated "running away. A house indicated a shelter or safe house. The Wrench indicated a means of getting free. Fascinated me so that's why I selected it for this month.
Jo x

What a gorgeous photograph of three beautiful children, and a funny joke too :o)
Jackie xx