In A Vase On Monday - Casualties of the Rain 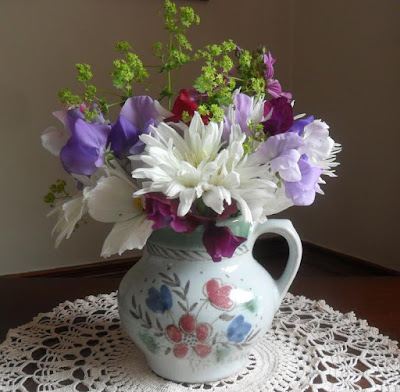 It rained all day today - I thought it would never stop long enough to gather in some flowers so that I could join in with Cathy's In A Vase On Monday. However it stopped around teatime, the sun came out and after an hour or so I thought it was safe to go out to look for what needed to be cut once the rain had done it's worst. 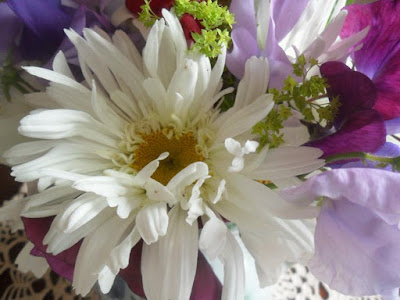 First to be rescued was a few Shasta daisies, Leucanthemum 'Crazy Daisy' - the petals of the double-white daisy already look pretty casual without the damage from battering the rain adding to it's shaggy look. Planted last summer, they have really repaid my patience this year. Each plant has bulked out nicely and is covered in blooms. 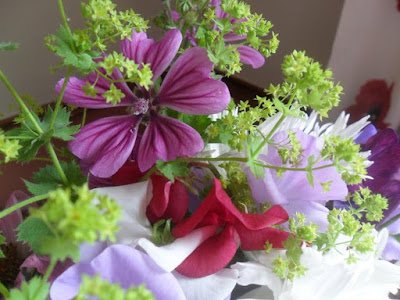 This Hollyhock Mallow, Malva 'Mystic Merlin', had started to collapse - it grows so tall - so I lightened it's load a little by cutting a spray of the top of the stem. These were grown from seed last year (free with Amateur Gardening, I think). It's a hardy perennial that's a great doer, flowering all the way through summer and well into late autumn in a variety of shades of purple, pink and blue - this one is a very pretty two tone pink which contrasts very prettily with the green of the Lady's Mantle, Alchemilla mollis. 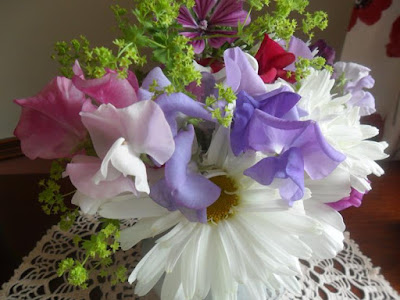 Then it was on to the sweet peas, Spencer's mixed - the first picking of the year. The lovely sugared almond shades were the perfect accompaniment to the daisies. 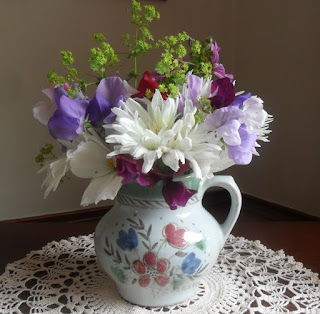 I found the pretty blue jug in a charity shop discovered on a recent trip to Helensburgh, Argyll and Bute. It's a piece of Portobello Pottery and, as I have family connections with Portobello, I simply couldn't resist bringing it home. 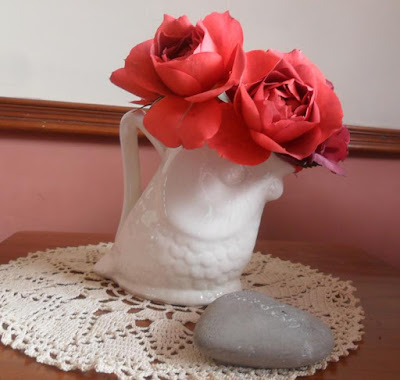 There's a few vases dotted around the house at the moment, all filled with casualties of the horrible weather we've been having recently so I thought I'd show you just one other. This spray of rosebuds was found broken of from our newly planted Hot Chocolate floribunda rose bush after a particularly heavy downpour so I brought it in and popped in this little owl jug. The blooms open from a smoky orange to a warm mocha brown - really unusual - and it also has a lovely scent.

If you liked my vases this week, you might like to pop over to Rambling In the Garden where you can catch Cathy's arrangement of bright and sunshiny sunflowers.

Email ThisBlogThis!Share to TwitterShare to FacebookShare to Pinterest
Labels: gardening, in a vase, photographs

Lovely vases Elizabeth. No one would be able to discern these flowers are "rescues." I think the green of the Lady's Mantle in the first one is very effective. susie

I too love the foil of the lady's mantle with your lovely blossoms. Gives that bit of pizzaz!

Not enough blooms to spare here, even for the wee test tubes I bought. So far I have had blooms on a burgundy day lily, a dark orange one, a striped dark and pale orange one, and a peach one. No sign of my lavender and pale gold one though. Hope it survived. But they are still really spindly so we are talking one stem each with 3 or 4 blooms over 3 or 4 days. The bellflowers have three stems (don't laugh" and the pinks seem to be doing the best.

Figure i can join in next spring! Always enjoy your Monday blossom posts.

The vase is the perfect colour for your little collection of blooms, Elizabeth. I was interested to read about your Mystic Merlin as I have grown that this year (free Thompson & Morgan seeds)- it is very pretty but leggy as you say. Do you think it would branch out if it was cut back? Mine hasn't made it to a vase yet!I like your double Leucanthemum too - much prettier than the single version. Thanks for sharing - hope you have a drier day today!