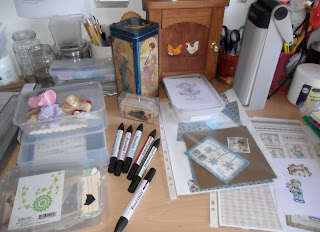 My apologies to you all for being MIA for some considerable time. I've been on holiday folks! And not doing a lot of crafting. Hence the state of my desk - the photograph is how it looked this morning because I've just dumped stuff on it to be tidied up when I got a moment. Boxes - there's a lot of them lying out. There's my box of coloured ProMarkers - I have another with the greys/skin tones/skin accents tucked away - and the pens I used on my last project are still lying out to be listed. On top of that is a box of handmade flowers, another of toppers, and at the back there's a box that used to be full of business cards but now contains miniature postcards and cigarette cards - to use for toppers too. Beside that is a box of stamped images ready to be coloured. The best box is a new one received from a friend and decorated with art nouveau ladies portraying the four seasons. It had fruit & lemon biscuits in it but, now that it's empty, I've bagged it for storage because it is so pretty - don't know what I'll store in it but I'll think of something : ) The last two items are poly-pockets containing all the materials to make a couple of cards some time.
A few hours later and this is what my desk looks like now. 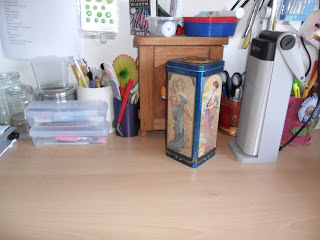 And if you are wondering why you've been privy to these before and after piccies and what on earth WOYWW is all about please hop over to the Queen of Desks, Julia's site - Stamping Ground - where you can take even more vicarious pleasure in snooping through tons of other workdesks from around the world : )

Now I'm off to do a bit of snooping of my own and see what you have all been up to while I've been away.

Love that biscuit tin Elizabeth, very pretty (and useful too of course!). Can't wait to see what you make next on your lovely tidy desk!

Firstly, I hope you've had a lovely holiday - where did you get to? Secondly, that's not really 'clutter' on your first pic, not really! You should have seen the state of my desk last week!!

lots of lovely goodies there, Happy WOYWW 99, Thank you for sharing your desk with us much appreciated it. A great desk. #31

Great desk Elizabeth --- both before and after !!!!
Hope you had great hols.

No wonder you do such lovely work... you know where everything is... very nice work area!

good girl - love to see the promarkers out, and can't wait to see how you colour that Web Knitter image
Debz
xx

Welcome back! Love your neat and tidy desk. Thanks for sharing. Vickie aka okienurse #35

Hi Elizabeth - I thought you'd gone quiet, good to see you back :) Am waiting for a new thingy to store promarkers but like the meanwhile idea of splitting between grey/skin tones and the others. And your desk ended up sooooo tidy, phew! Hope you had a great holiday. Di x

It's great to have a good tidy now and then isn't it? Very pretty tin, I wonder if it smells of lemons? I love that smell but it might make me hungry every time I opened it! #103

Hope you had a lovely holidy, Elizabeth, did you go anywhere nice?
I love your biccy tin. I have the winter lady image as a flower vase which we brought back from Austria and I love it.
Hugs Lisax

There looks like an interesting project on your desk ....which is never really clutterd. Hope you enjoyed your break from all your crafting

Your tin is gorgoeus, I would have had to eat the biscuits in double time to get my mitts on it!! Your desk looked pretty good in the first shot and then whoah... imaculate in the second one... you could earn good money doing that trick on the rounds of desks!! LOL Annette #5

Loving that tin! Caught my eye as soon as I saw it.
Interested to read you collect mini postcards and tea cards. Do you make your own or do you collect commercial ones. I ask because I used to make tea cards with a group I was on long long ago. Great fun.
Hugs, Neet x

Ooo Elzabeth I am incredibly late but oh how I love the tin.. yum yum.. not for the content s but very pretty as you said!! happy belated WOYWW and TFS! Shaz in oz.x

Beautiful bisquit tin, and I love how you cleaned up your desk and then shared it with us.

I was here honest! But youknow how sometimes the comment box just won't open!
Web knitter, yes, I have that, but never used it, so will go and hunt it out! I'm back in my crafty space now and thinking about tomorrows freebie, talk about last minute!! Actually it's usually closer to midnight! I could cheat and do my WOYWW post now...
I usually do take a few things with me when I'm away, but there really is no time to do anything, and they are never the right things! Thank you for your visit and a snoop! Happy very late woyww
(Lyn)