A4 Scrapping - Some Old Layouts

Good evening to you all, 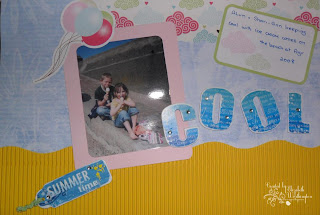 I've been talking with a new buddy over on Docrafts - hi Jane - about scrapping, and in particular the different layout sizes there are, including A4. This does not appear to be a popular size page now but, as we get into the digital way of things, especially as there are many more CDs Roms becoming readily available, it could well become so. And, with the printers most of us own, the largest size of paper we can print is A4.

Oddly, when I first started making scrap pages, a few years ago now, I bought an A4 sized ring bound album just to practice with - I have absolutely no idea why!  I bought a magazine or two and they contained free papers, some cardstock, some ready-made scrapping embellishments and die-cuts, glue and scissors. That was about it, my total scrapping arsenal : ) Needless to say, most of my pages are simply not print worthy - well, I really hadn't a clue!!

The Cool Summer Time page above uses just one photo - a favourite taken of my daughter's two youngest having fun at the seaside. The backing paper was free, the yellow corrugated paper I used to represent sand is from a cheap pack bought at The Works and the die cuts came in a pack from my local craft shop. 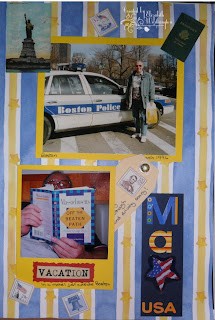 This two photo layout uses yet more free paper and records the EM on his first trip to America. As you can see, he was really taken with this Boston police car. To fit the two photos in I went for portrait instead of landscape orientation. And, I made full use of some travel stickers bought from the local craft shop. I hadn't discovered the joys of Internet shopping, TV shopping channels and YouTube yet!! 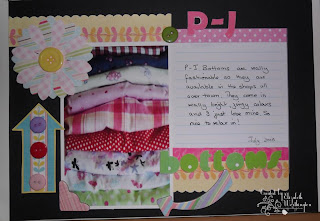 This last layout is one lifted from one of the magazines. I thought it was a fun topic, very current at the time of making because it was in the national newspapers that a supermarket manager had actually banned a woman shopper from wearing them! I can see that I had purchased my first punch to make the flower, discovered buttons and discovered that my PC wasn't just for business - I could use it to print out the title letters : )

So there we are. A few of my first attempts at scrapping - well, we all have to start somewhere. I was still working full time then so had little time to craft. It was a stuttering start and it wasn't until I retired, had more time, converted my office to the craft space, had read a great deal more books and magazines, and became an avid watcher of demos on YouTube, that I moved on the 12" x 12" pages. And the rest, as they say, is history : )

Hope you enjoyed this wee trawl through my personal crafting history. If it has encouraged some of you to think that you might also like to have a bash at producing A4 layouts then I'm sure you will enjoy the challenge.

Its fun to look back sometimes. I scrapbook with Creative Memories stuff - (expensive, I know but I like there style) - and when I look at my first pages thye look very un structured but they do chart a journey.
x Tricia
PS - thank you for the kind offer of the booknmark, It is very generous of you. I'm triciafoj over at Docrafts.
x Tricia

Isn't it amazing what we were able to create with very limited supplies. It's good to look back and see how we have progressed over the years. Some of my early pages weren't even worthy of photographing, but I didn't know it at the time :o)
I the scrapbook I am doing for my Granddaughter is A4 but I mostly work with 12x12 nowadays.