Hope you are having a wonderful weekend.

I don't know about you but I feel well rested after the extra hour in bed this morning! Not only that, but it's filthy weather here, perfect for staying in and doing a spot of crafting :)

I have two cards for both Pixie's Snippets Playground - Week 148 and the PENULTIMATE Rudolph Day Challenge over at Sarn's Stamping for Pleasure. 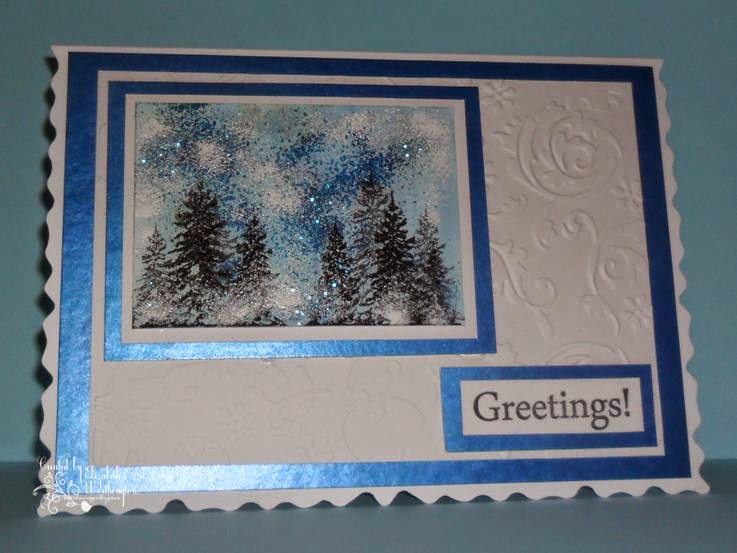 - For this first card I've used one of my watercolour pieces. Not that you can see much of it now that I've stamped trees in black Archival on it and then faux 'Frantaged' it with white and crystal embossing powders and blue glitter. It was matted on to white card found in the snippet mountain.
- The shiny blue card used for all the matting has been in the NBUS (Never Been Used Stuff) pile for simply ages. Much as I liked it, I could never find a project to use it on until now!
- The greeting, from a Sheena Douglas Christmas stamp plate, is stamped on to a snippet of white card and the folder used for the white embossed layer is from the Twinkle set from Cuttlebug. 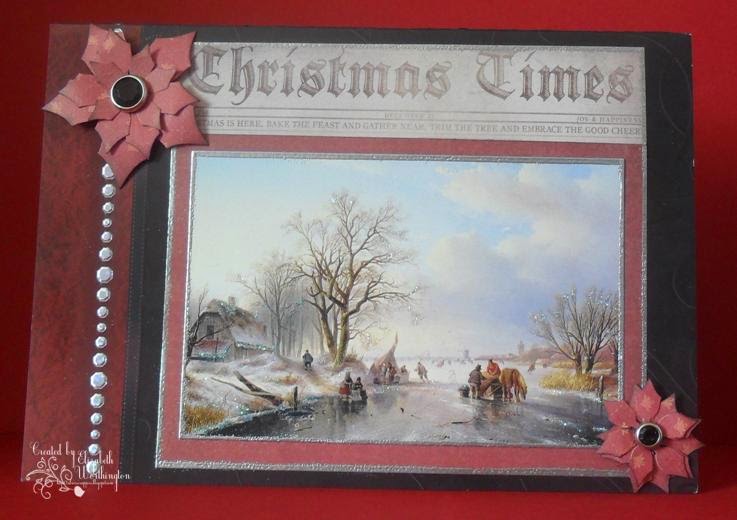 - I've used another piece of card from the NBUS pile to make the base of this card ... Darnell will be proud of me :) It's a lovely printed and embossed sheet from Kanban - I think it came with a stamp kit but can't be sure because it's been in my stash for so long.
- The winter scene topper is the recycled top of a card received last year which has been trimmed, edges embossed with silver powder and glitter added here and there - hard to see in the photo but it's definitely there.
- The matting layer was constructed from two sheets of DP from a Kaisercraft 6" Christmas paper pad that came free with a copy of Simply Cards & Papercraft. Again the edges have been edged with silver embossing powder.
- The poinsettias were cut out of yet another sheet or two of DP from the paper pad using a Spellbinders die set, edged with Black Soot distress ink and pinned together with black gem brads from stash.

I'm feeling quite virtuous now ... I've managed to use up snippets, goodies from the NBUS pile, and those ancient brads - I'm sure they have been in my stash for at least four years - while making of these cards. I wish, though, that I could say it's made a lot of difference to the amount of stuff here in the craft room but I'm afraid not ... must try harder!

I'm also going to submit the cards to Hazel's Christmas Extra Challenge for October where anything goes as long as it's Christmas themed.

Right, that's me done for now. It's been a busy few days for me. There was the craft show in Glasgow in Thursday, fun but exhausting, which meant Friday was a complete write-off ... it takes me 24 hours to recover! Then The Boss took ill late Friday afternoon which meant a visit to the vet on Saturday morning. Because she is so old I was fearing the worst so was mightily relieved to find what ailed her was treatable :)

After all that, I'm being taken out for tea today so must get a wriggle on or I'll be late.

Both cards Elizabeth are perfect for your challenges x

Cold, damp and windy here, so planning to crack on with my Christmas cards today. So pleased that I brought my craft box with me to our caravan. It's not exactly the weather for exploring the Devon countryside!

Two beautiful cards Elizabeth, I love the blue shiny card and the gorgeous EF you used on the first one. A nice vintage feel to the second one with the lovely winter scene.
Jean x

Good Evening Elizabeth. Love both of your cards. Enjoy your Dinner out too. Hugs Rita xx

Gorgeous cards. The top one is very striking in the blue and I love the second one using the printed paper. I have that pad sat in my stash waitng to be used up. Hugs Mrs A.

Hi Elizabeth,
what 2 super creations.
They are both so fab.
Love your really great designs.
Lots of crafty love. Jenny L.

Two SUPER Christmas cards here Elizabeth. Love the trees and colours of the first one, and the vintage appeal of the second one.

Hope you enjoyed being taken out for tea.

The first has such a nice colour contrast with that pretty blue mirri card and great EF. The second has a lovely vintage scene feel!

Two great cards Elizabeth. I think you got the worst of the weather today - it really wasn't all that bad here. Hope you enjoyed your tea. It is always so nice to be taken out and of course the best thing is no dishes.

Two wonderful cards and the background and image on the fist card are wonderful the second card is a wonderful scene.

Both your cards are so lovely, Elizabeth! How clever to take a piece of decorated paper that you've made, and an old Christmas card, and transform them into such lovely new cards!

I didn't get an extra hour, I was up an hour earlier!!!
Two beautiful cards Elizabeth :o)
Jackie xx

Two gorgeous cards Elizabeth! And isn't is wonderful what we find to use up when we dig deep!

Thank you for playing in the Snippets Playground with us :)

Two wonderful cards Elizabeth and quite agree with you on the snippets the more you use the more you seem to have.
I do a cull every now and then or a reorganise which might not reduce them by much :D Shaz in Oz.x