In A Vase On Monday - and a wee garden update

I hope you've had a merry Monday. It's been a bit damp underfoot here ... my shoes got a tad muddy out in the garden today.  So it was a quick trot round, armed with camera, trug and secateurs, to see what is still flowering as we edge towards winter. More than I would expect at this time of year here in Scotland ... apart from the roses that just keep blooming, there are hollyhocks, malvas, nasturtiums and even some lingering snapdragons. I spotted a few penstemons quietly blooming in a corner of the long border where the petals on a pink aster are just about to burst open. Two new plants that have just gone in, Rudbeckia Little Gold Star and a mini purple aster - not a named variety - are putting on a good show too. Then there are the shrubs that shouldn't be flowering at all. 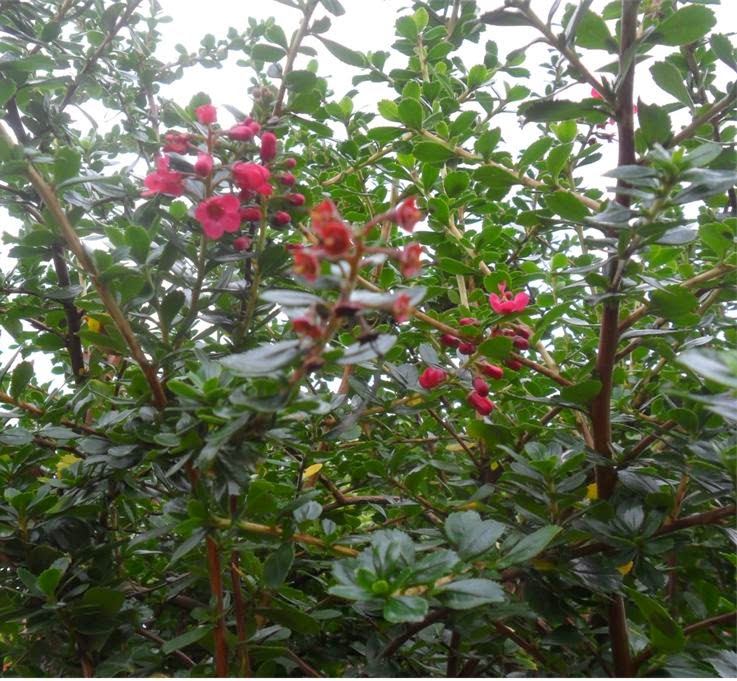 This escallonia doesn't seem to know that it is well past it's usual flowering period. We inherited it with the garden so I can only hazard a guess as to which variety it is, possibly E. rubra var. macrantha. And then there is this Spiraea. 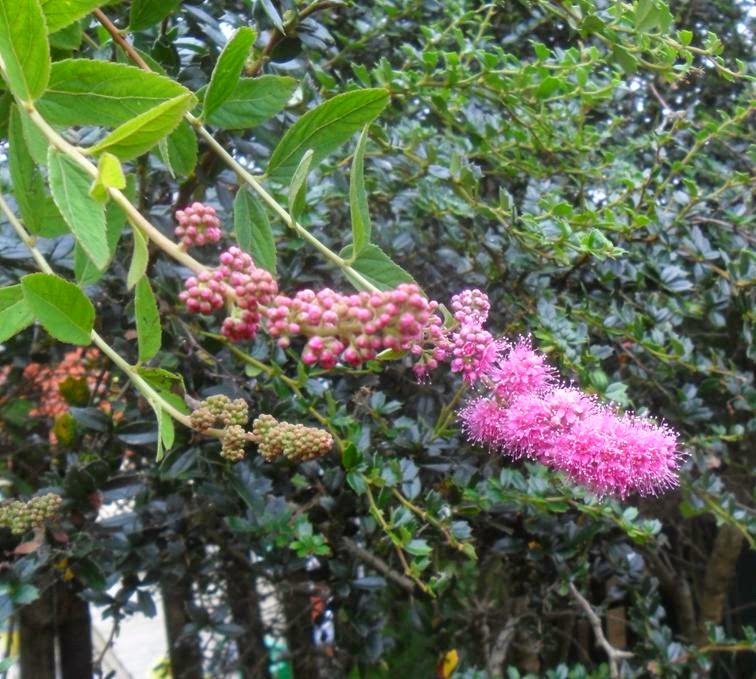 Another inherited, and so nameless, plant which flowered earlier in the year then stopped and here it is putting on a lovely show again. Either it's because of our unusually hot summer or because of the drastic pruning job we did on them in the Spring that has tricked these shrubs into flowering again - whatever, the garden looks all the better for it.

Having said all that, it's time to join Cathy at Rambling in the Garden for her meme, In a Vase on Monday, so here's today's vase. 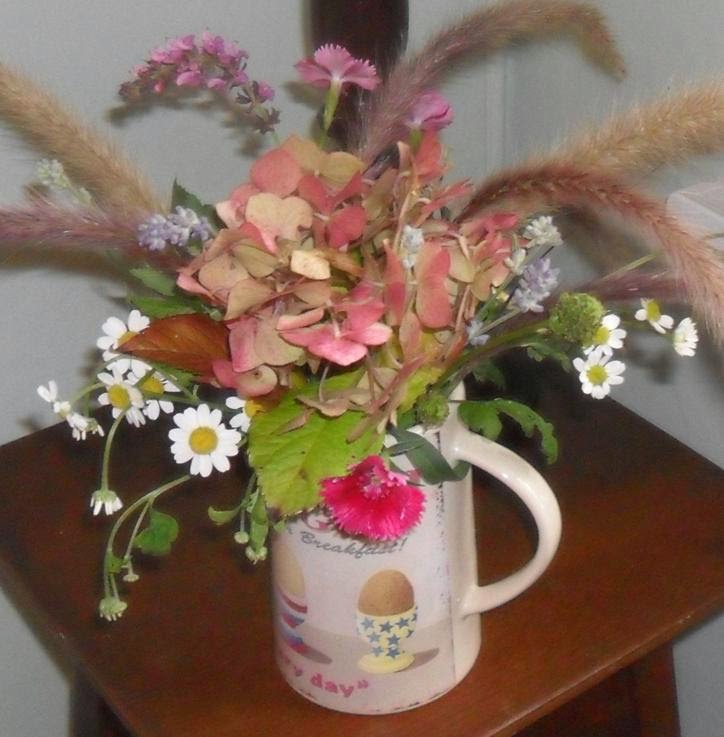 Lots of little bits and bobs found on my saunter round the garden. Our one and only hydrangea flower. The poor plant lives in the shadow of an massive berberis and so isn't doing well at all ... I have it earmarked for a move to a better spot. 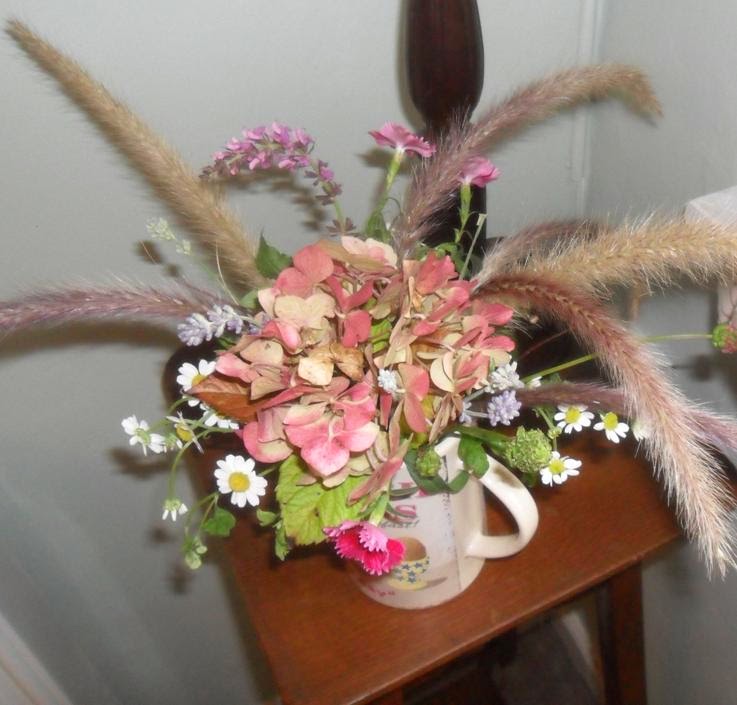 I've teamed this up with a few sprigs of feverfew (tanacetum parthenium), lavender - a so-called dwarf form that has grown so big it's going to have to be moved - salvia x sylvestris 'Rose Queen', salad burnet flower heads, pink dianthus grown from seed, and fluffy pennisetum heads.

They been arranged plonked into the egg jug that you may have seen before and placed on the stand in our newly painted hall. The colour doesn't show up too well in the photo but it is a light shade of green ...the name on the tin is Spring Sage ... it's lovely and fresh looking. 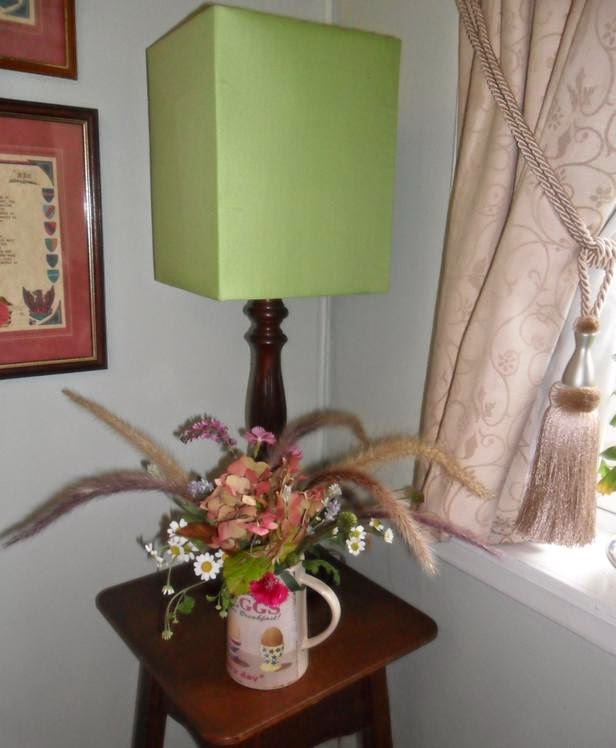 Today, I set myself the task of checking just what jobs are still needing to be done before the first frosts arrive ... and it seems there's rather too many. I don't know when I'm going to get it all done, especially as there is even less time to do it in ... shorter days and fewer hours of daylight to work in.

However, there is one job we have managed to get done recently that I thought I'd share with you now. The scruffy grass areas in the back garden have been a source of concern almost from the day we moved in eleven months ago but it wasn't until the end of September that we were able to do anything about it. With the help of our two youngest grandchildren we transformed that ... 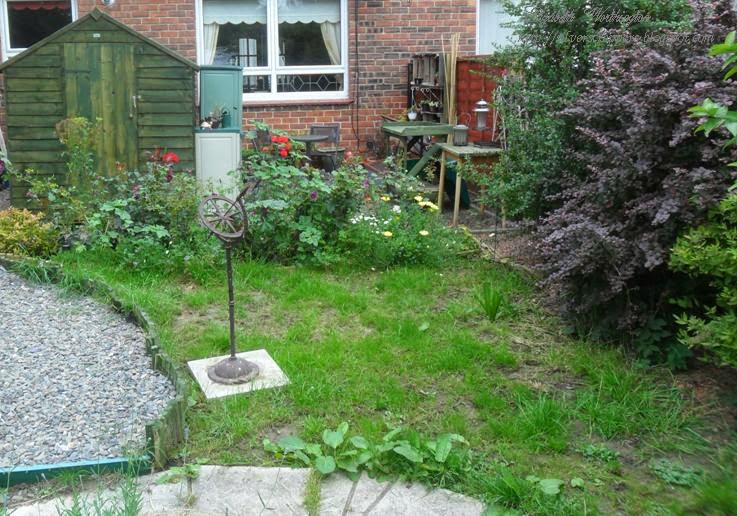 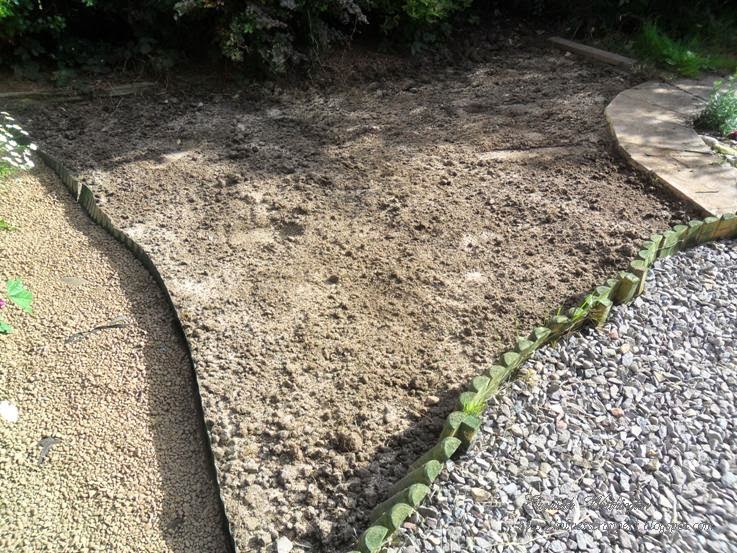 It doesn't look much right now but wildflower seeds, a mix of annual and perennial, have been sown in there so by next summer it should be a blaze of colour ... well, that's the plan anyway! 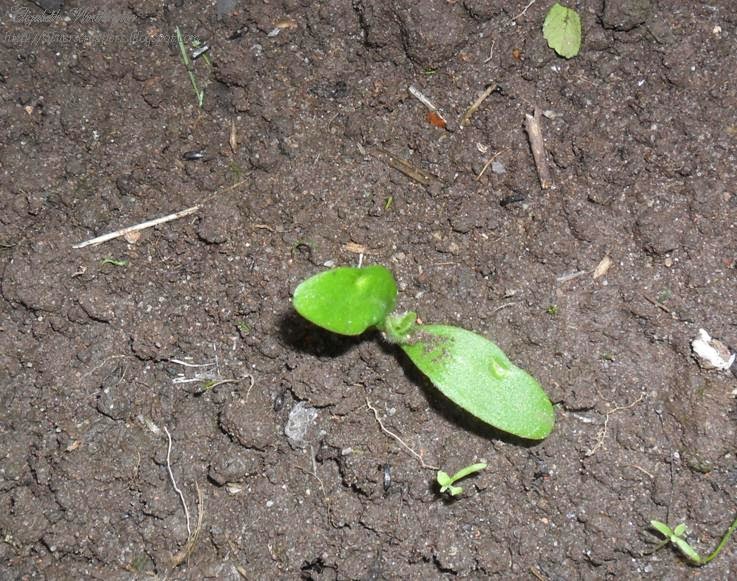 And, as you can see some of those seeds have germinated already. As long as the birds leave them alone and the cat takes her morning constitutional elsewhere this patch should be a thing of beauty next year. 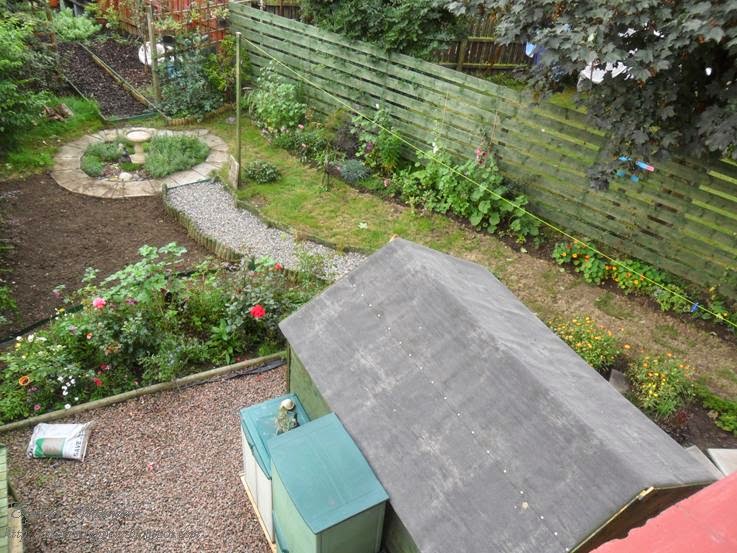 I'll leave you with this shot taken from above. You can see my husband's mancave (the new shed) and my smaller sheds alongside on the gravel area, the rose bed, the long border, the other scruffy grassed area ... can't call it a lawn ... the scree garden with the bird bath at it's centre, and the woodland area beyond. Just peaking out at the side of the shed is the herb bed.

Lovely arrangement Elizabeth, you are a busy bee out there in the garden, and what a difference you have made, looks great.
Hugs Jacee
Simply Paper Card Design

Another very pretty 'in a vase' Elizabeth, and what progress you have made on the garden.
Love your little Sengeti card, with it's vibrant colours, too :o)
Jackie xx

Hi Elizabeth,
I love you way with words arranged crossed out and plonked put there instead.
that's how I would describe my efforts at arranging flowers.
My late Mum on the other hand was a genius at it.
The garden and your plants look great.
Lots of crafty love. Jenny L.

What a sweet arrangement, Elizabeth, a lovely collection of flowers and herbs! And what a fabulous garden, too! Please post a pic of the wildflowers next year when they're all blooming, they will look amazing!

Lovely vase Elizabeth--especially like the hydrangea. Also it's nice to see more of you garden from the overhead views.

I love your garden, Elizabeth! What a beautiful spot to sit and enjoy!

How lovely to have grandchildren to help with the garden sometimes, I'm sure they enjoyed working with you to create the new area. Pretty vase!