Actually, it's not really a good afternoon here ... it's windy and wet. Apparently it's only going to get worse because the tail end of Hurricane Gonzalo is heading our way! That being so, you know where to find me, holed up in my craft room experimenting even more with watercolours. Which is what I've been doing whenever I had a spare moment recently and now I have a couple of finished cards to share with you. 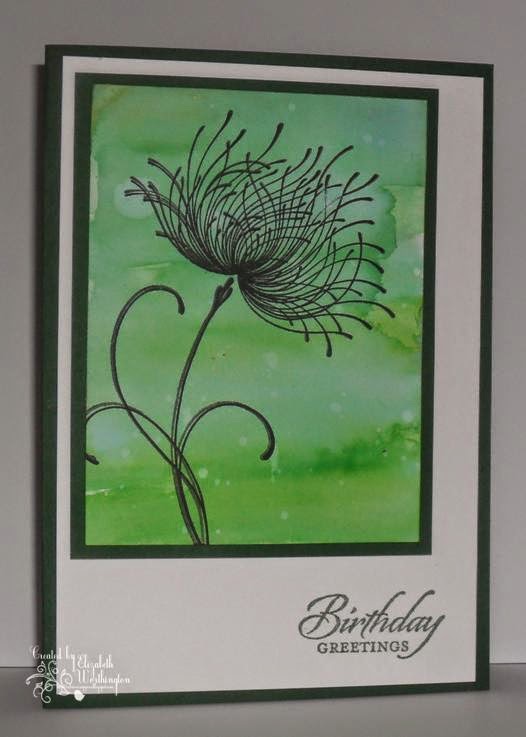 This background for the topper on the first card was created with Aqua Tint brushed over white cardstock. I dampened the white card with water before brushing on the colour in a sweeping motion. I think you can see that I went back with more colour several times trying to get a sort of landscape effect. Once the ink dried, I splashed some water droplets over the surface - this has a 'bleaching' effect adding a bit more interest to the finished background. 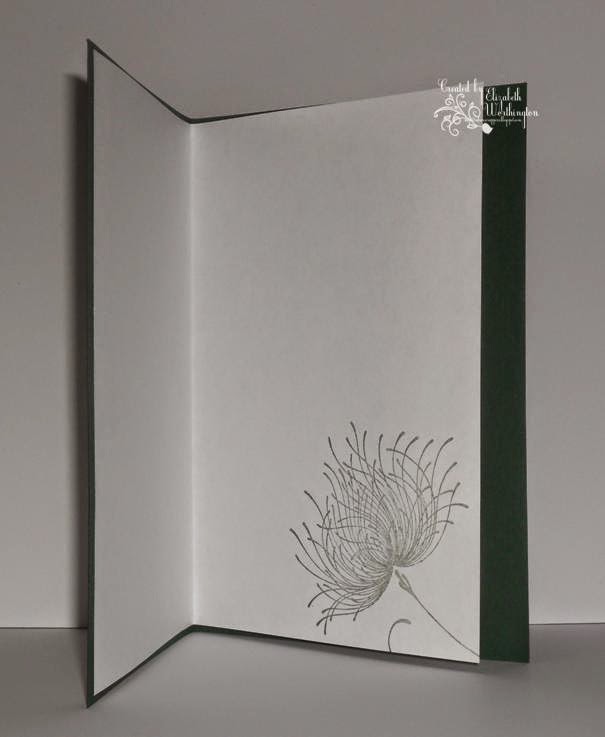 The fabulous stamp used is a Penny Black slapstick cling called Dreamy. Forest green cardstock from Papermill Direct was used for the card base and the matting with a scrap of white (same source) for layering. The greeting, from Stampin' Up's Wetlands set, was stamped up with VersaFine Olympia Green. 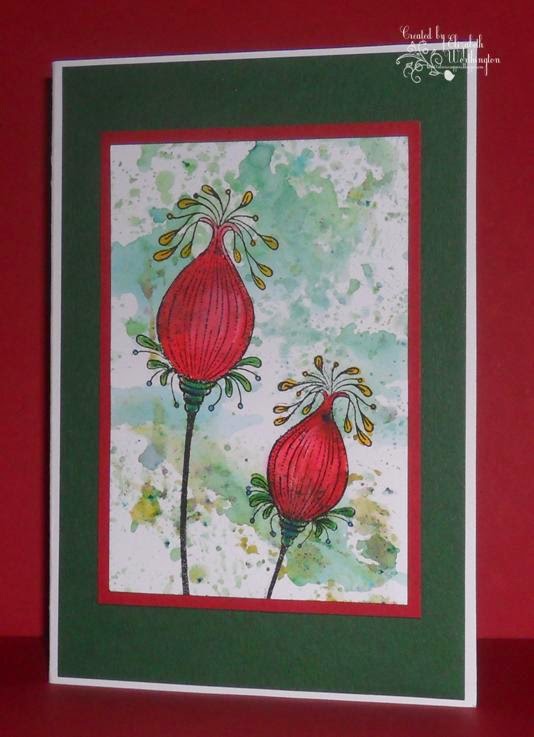 The background for this second card was made by mopping up paints, leftover on the craft mat, from the first and then adding just a little sprinkling of Leaf Green Brusho crystals in the areas that were the dampest. The images, zen poppy pods from Lavinia Stamps stamped with Archival Black ink, have been painted with a combination of Aqua Tints and Brusho crystals in shades of red, yellow and green.

The topper is matted on to a snippet of red American Crafts cardstock and then layered on some of the green card leftover from the first card. No sentiment or greeting on this one ... that way it can be used as a notelet.

And as I've manage to incorporate a fair few snippets into these cards, I'm off to submit them to Pixie's Snippets Playground - Week 147.

Would you believe it, since I started to write up this post the sun has come out to play! It's still windy but so nice to see the sun again, however briefly :)

The EM put on his domestic god pinny this afternoon and has been baking up a storm, fruit scones and my favourite low-sugar fruit cake ... the aroma wafting through the house is simply gorgeous.

Just discovered that the Christmas Movie channel has returned ... it's only the middle of October and we haven't even had Halloween and Bonfire Night yet!!!

PS: Have you seen that I'm celebrating with a giveaway ... do check out the sticky post at the top of this blog for details.
Posted by Elizabeth at 15:27

Stunning cards Elizabeth and I did chuckle at your Christmas Movie channel comment because I saw it and thought oh wow! it's getting earlier. The wind has been terrible here and it's supposed to be getting worse from tomorrow I best have Ollie on his lead in case we get blown away!!! huggles Sue xxxxxxxx

Love them both, Elizabeth. Hopefully my Brushos are due next week so I'm looking forward to experimenting, I love your mix of greens on the second card.
Hope we don't get too much wild weather next week.
Hugs Lisax

Beautiful cards Elizabeth, love the backgrounds in both. The Dreamy flower looks fabulous on the green. I keep hearing about theses "brushos" and must google them, love the effect they give, Cathy x

Hi Elizabeth. Loved reading how you created the background on each of these very pretty cards. #1 is so simple with the ombre look and that lovely dark silhouette flower image. #2 was equally so with the way you've mopped up the puddles of color to create that marbled background. Love the pop of red over the greens & blue puddles, and the matting colors are so perfect with all the other colors. Two very beautiful cards. TFS & hope all is well. Hope you have no damage from the rains & winds off the storm.

Both cards are lovely, but I'm partial to the green version. I love how the sentiment seems to flow exactly like the flower! Great background work on both!

I always love your experiments with colouring mediums (is that correct? should it be media?) Elizabeth, and these are both so beautiful. Green is my favourite colour so the first one is my favourite card, but only by a very narrow margin :o)
Jackie xx

Oh Elizabeth, these are both absolutely fabulous! Beautiful backgrounds and that 'Dreamy' stamp is absolutely wonderful. So much so ........ you know the rest!

I am very taken with BOTH these cards Elizabeth. Can't decide between them really, although, by just a smidge, it might be the Lavina one!

Stay warm and cosy eating fruit cake while the weather is atrocious!

I have to open your comments in a new window for some reason, but at least I know what to do now. Both these cards are great. I love the stamps you have chosen. We are all having fun with the inky backgrounds aren´t we? They really are very effective. Kate x

Two beautiful cards Elizabeth, I love both of your painty backgrounds and the dreamy stamp is gorgeous.
I hope the storm isn't too fierce.
Jean x

Hi Elizabeth,
these cards are really superb .
Love those fab stamps, and your fabulous backgrounds you have created.
That low sugar fruit cake sounds yummy will have to try and find the recipe.
Lots of crafty love. Jenny L.

Beautiful background effects on these two cards. That PB stamp is gorgeous too!!! So suits the watercolour background that you created.

Sorry I have not been over to visit your blog for such a long time. I finally finished the sorting and purging and have had the movers in for a quote.
Two months to go till i need to start packing...so lots of time for visiting and blogging and crating! See ya for a visit again soon!

Ooooow! fabulous cards Elizabeth. I love the effects that you have created.

You have made my tummy rumble with talk of fruit scones and cake!!

I hope that the storm hasn't caused any damage.
xx

Gosh! Somebody has been working hard. I just love that first card specially.
Time for a wee dram I think!
Hugs
xx