In A Vase On Monday - Heat Wave

I thought I'd make a change from roses today for Cathy's meme, In A Vase On Monday, so went for something completely different. 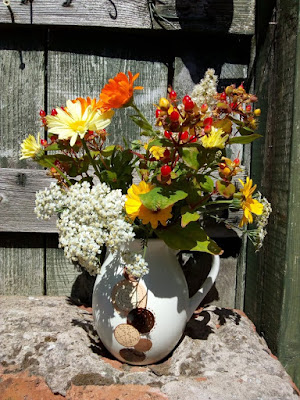 My selection of colours, red, orange and yellow, were chosen to reflect the prolonged heatwave we are enjoying/enduring (delete as you think appropriate). My first choice is the Hypericum 'Magical Red Flame' with it's bright yellow flowers and red berries. 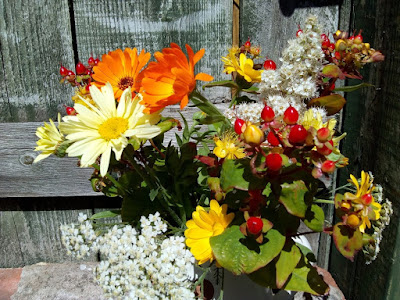 Next, growing just beside this shrub, and in danger of being overshadowed by it but not quite yet, is Leucanthemum 'Banana Cream' . 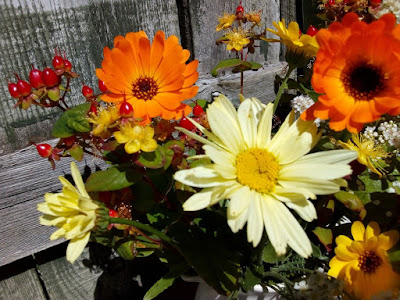 And I couldn't resist the marigolds (calendula) that happily seed themselves around the garden every year. One packet of seeds strewn around the herb patch four years ago and now they just keep on popping up wherever suits them. 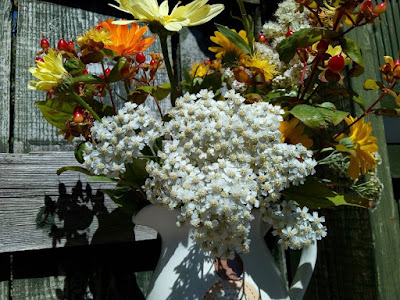 Two white flowers accidentally found their way into the bunch as I went around the garden making my choice. The yarrow (achillea millefolium) is there because I unintentionally cut through the stem  when I was aiming for a little yellow marigold that was particularly pretty. 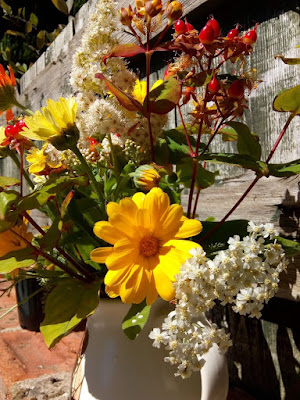 And then there is the fluffy white spear - above the yellow marigold here. It comes from a shrub that was planted as part of a mixed hedge years before we moved in here. I have no idea what it's called, possibly a variety of spirea, but it has a tendency to send out growth into the border where it is not wanted. I fear it is intent on world domination!

The jug is yet another of my many charity shop finds. It's fairly modern - it's marked dishwasher safe - but the brown design on cream so reminds me of the seventies. In fact the colours in the whole arrangement takes me back to that time, bringing back memories of  other hot summers, and The Jam performing 'Heat Wave', hence my title this week.

Hope you are enjoying getting out in your garden and cutting flowers. Me, I've found that gardening can be a dangerous sport. 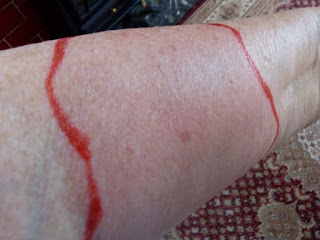 I've been bitten by some bug that left more than the usual calling card. The red marker was put there by my doctor this morning - if the swelling continues to spread outwith that line I have to report back for another examination as it's just possible it may develop into cellulitis. In the meantime, she's prescribed antibiotics and antihistamines. And all because I decided to cut back the overgrown shrubs down in the woodland area!

That's me for today. Do pop over to Cathy's Rambling in the Garden for her In A Vase On Monday.

Heat seems to be a common theme THIS WEEK! I love the hot colors of your arrangement and particularly that Hypericum. As to the bite - yikes! I've collected a few myself over the past week but none with an impact like that. I hope the meds make quick work of it!

Good grief - it's a dangerous pastime! Mind you, a prick from pyracantha finally made me make the effort to get a tetanus jab recently, just in case, because my finger swelled up considerably. Hope all proves to be OK, Elizabeth. I really like the banana leucanthemum with the marigolds, and the hypericum looks so attractive in a vase but I have always avoided having it in my garden!!

Oh you poor thing your leg looks so sore l hope the antibiotics work quickly and a 2nd examination isn't needed we need to take extra care in our gardens with the way the weather is becoming more heat and more rain brings strangers to our gardens on another note your flowers are stunning you must have an amazing garden .....sending lots of love xx