In A Vase On Monday - Late Summer Gorgeousness 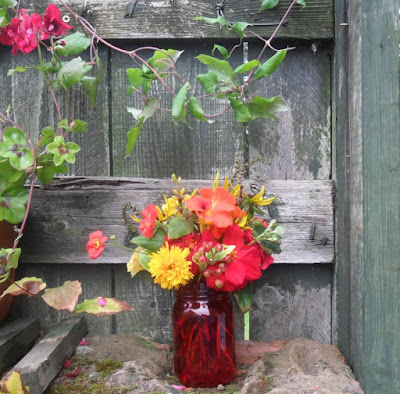 A few weeks ago I was concerned that my forward planning fell short of providing enough material to fill an eggcup let alone a vase and so wouldn't be able to  contribute to Cathy's meme, In A Vase On for much longer. I needn't have worried. The garden is now a riot of gorgeous zingy oranges, reds, yellows, bright pinks and even the occasional calming blue, giving more than enough for this week's vase - which is in fact a bright red glass jam/jelly jar. 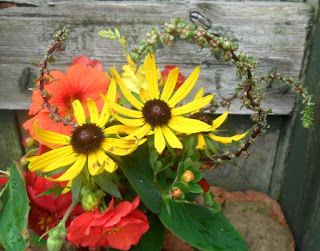 I thought I'd lost this Rudbeckia Little Gold Star to the freezing temperatures of last winter but it's clearly a lot hardier than I gave it credit for ... but I would have spotted it earlier if it wasn't for it being completely surrounded by pot marigolds, Calendula, which, along with the many nasturtiums that have spread upwards and outwards, in the style of Monet, seems intent on taking over much of the garden. 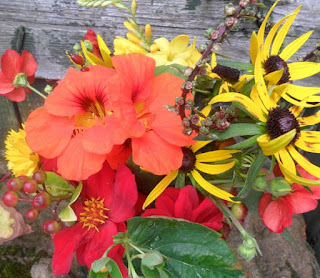 And talking of nasturtiums, I really love these deep orange Tropaeolum majus Empress Mixed grown from seed.  Just visible behind the Skimmia and Hypericum berries are deep red Figaro dahlias and tucked in at the back is Crocosmia Okavango. Included also are Geum Mrs Bradshaw and Coreopsis Early Sunrise. I've also added three stems of ruby chard that has been allowed to go to seed with the intention of saving some for sowing next year ... I like the shapes the stems twist themselves into. 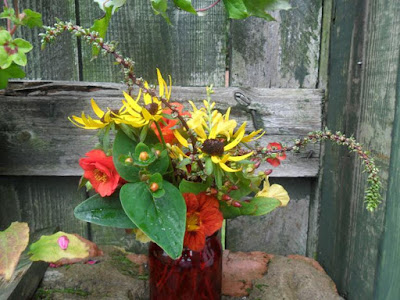 The glass jar I've chosen this week is one of a set of three found at the Southport Flower Show a few weeks ago.

It started to rain as I was taking photos so you might just make out the raindrops glistening on the leaves of the Hypericum ... the things I do for In A Vase On Monday :)

The red glass vase is so lovely, and really accents the colorful flowers. I like your palette of red, orange, and yellow. The berries add a nice touch, as well as the trailing ruby chard seed heads. There are so many varieties of Crocosmia I haven't heard of before! The Geum Mrs. Bradshaw is such a bright red, and so frilly, mine finished blooming long ago. There is so much inspiration for things to grow next year.

What a perfect autumn vase with rich colors and that rudbeckia is wonderful. Rudbeckias withstand the -20 degrees here and lots of cold and snow...they are so super hardy.

!Ao beautiful l love to see flowers in a vase and it's great that you show your post brightens up my day xx

I trust you feel it was worth getting wet to produce your pretty vase! That's a pretty yellow crocosmia you have included - and don't nasturtium look attractive in a bunch? I picked some at the same time as my other blooms and they are in a mug on the kitchen table. Your Geum is doing well to be still flowering - mine have only had odd flowers later in the season. All these colours are so typical of this time of year, aren't they? Thanks for sharing

You always manage to make even a small jar of flowers look so beautiful, I love the red jam jar, never seen one of those before :o)
Jackie xx

such lovely autumn colours and you have chosen just the right coloured jar too! I also often think that I won't have enough for a vase on Monday, but then somehow manage to find something in the garden.

What a riot of colour! Beautiful blooms...