Hope it's been a good day for you all. Me, I've been tortured by the dental hygienist again ... if only it wasn't so necessary. But, if I want to hang on to the real thing, it's a necessary evil :( That done, it was back to the safety of my craft room for a bit of rest and recreation :) 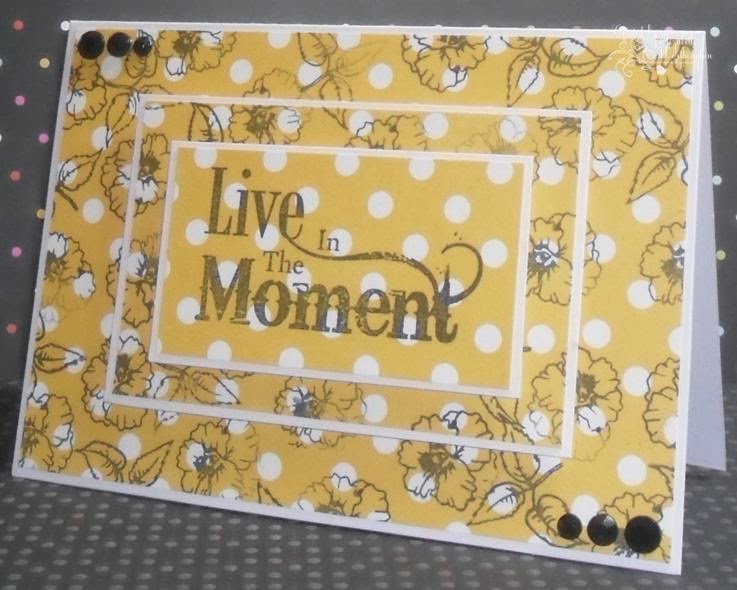 If you've read my WOYWW post of yesterday you will have seen this card in progress. As I said, it was inspired by the triple stamping technique done by two inspiring ladies, Sarn and Di. Sadly, Sarn has deleted her brilliant tutorial on this technique but I see Di, in her post today, has developed her very own twist using heavily patterned paper - one I will certainly be trying for myself.

Basically, triple stamping relies on careful stamping over three layers of card or paper and relies on accurate cutting and layering. I've chosen to stamp over just two layers - double stamping - and created a sentiment topper of the third.

The first step was to shuffle through the snippet box. This produced a piece of leftover 12x12 polka dot patterned paper and a few snippets of white card which were trimmed into three pieces, large, medium and small ... the white card being a fraction larger than the paper to create the matting. Leaving the smallest piece for later, I then placed the medium piece over the large - and used some removable glue tape to ensure the pieces stayed where I wanted them.

The next step was to stamp the flowers and leaves randomly over the surfaces, being extra careful when stamping on the edges of the medium piece ... it's easy to miss the stamping and get it wrong here. That done, I then stamped the sentiment on the bit put by for the topper. 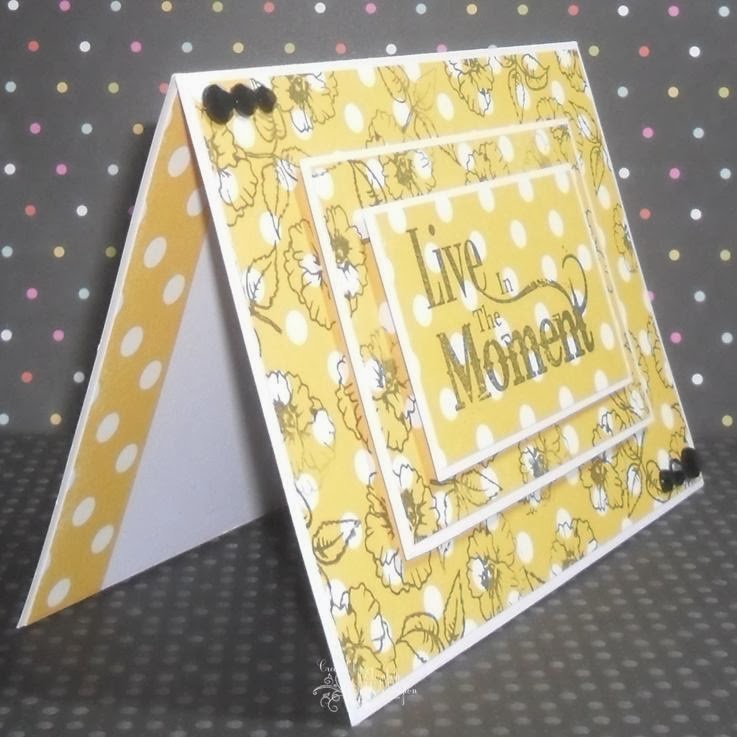 Once all the stamping was completed the pieces were matted with the white card to create three layers that were then layered together with dimensional foam dots - paying particular attention to lining up the base and middle layer, ensuring the flowers/leaves match up exactly. Finally, some black crystal gems were used to decorate and snippets were trimmed and adhered to the inside and back.

Having concentrated on using card and patterned paper from the snippet box I will be popping over to Pixie's Snippet Playground - Week 109.

I'm not holding my breath, but it does seem that whatever was snarling up access to the Internet has been fixed. So who's a happy little blogger then :))

And, even better, there's another episode of Silent Witness this evening ... love it :)

Hope you, too, are having a lovely evening whatever you are doing.

Really like the card Elizabeth, saw Di's earlier and am going to give it go. Watching Silent Witness as we speak :-) Anne x

This is such an effective technique, and I love the way you have done yours. That little Clarity flower goes beautifully with the patterned paper. You will be please to know that my desk has had a serious bit of use today, and unfortunately, I did not get time to clear up before I left the room. So that is tomorrow morning's first job so I can get on with some DT work, which I need asap, like yesterday. Nothing like cutting it fine. xx Maggie #2

This is just gorgeous love the yellow paper :)
Vic x

Really clever card Elizabeth. You combined using patterned papers AND stamping - a great twist and I love it.

Ha, ha - I found a photo of me the other day, wearing a mini dress in just that colour polka dot material!

Thanks for the mention Elizabeth . . . sorry I managed to delete something you wanted to refer to . . . I have a habit of culling older posts from my blog every now and then!

Onto your card . . . it is glorious in its polka dot loveliness. I really love this technique.

Hope the hygienist wasn't too unkind to you.

Owch! I hate dentists and do not envy you at all. I never used to be bothered by them until I had a nasty experience! I cannot believe we have to pay for this pain!
Lovely card though. Great paper and stamping. Very clever.
Hugs
xx