My second visit today, this time with this scrap page layout recording the London Olympics. 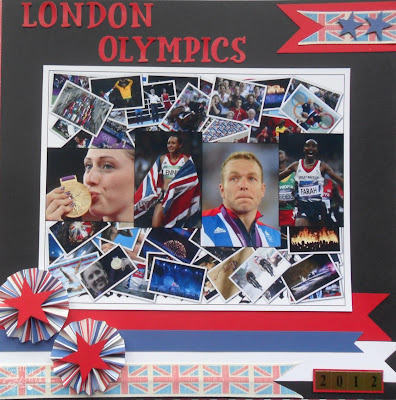 Over at Scrap Our Stash this month we were challenged to pagerize/scraplift this fun layout of Debbie's, entitled Water Silhouettes 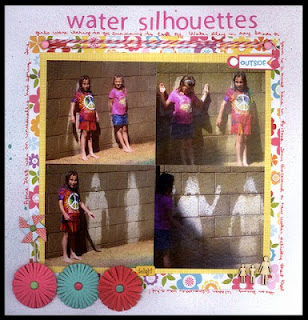 I thought this layout would be ideal for a collage of Olympic photographs I'd collected throughout the event. I created the collage using the Shape Collage programme mentioned in this earlier post here. As mentioned then the only downside of not having the fully paid up programme, rather than the freebie, is that the web address is always included somewhere on any collage created. In this case it appeared across the middle so I superimposed four of my favourite photos - this had the advantage of giving the shots emphasis, so no bad thing after all.

Having created the collage, the next step was to put together a kit from my stash ... I didn't want to go out and buy any new supplies, instead I wanted to use what I had. Easier said than done! I didn't have any suitable patterned paper except for a cheap striped one that I didn't particularly like, it reminded me too much of men's pyjamas. However, the colours were right - red, white and blue. So after much raking in boxes of cardstock, here's the kit I came up with. 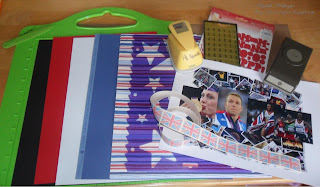 As you can see the layout and the embellishments are all very simple ... it relies mainly on pennants, cut from the card, for interest. The rosettes, which no longer look anything like men's pyjamas, are made from 1" wide strips of the striped paper, scored at 1cm intervals, folded in concertina fashion, ends adhered together and then, once persuaded into shape, adhered to a circle punched from the red card. All the stars were traced using the stencil and then cut out. Two larger red ones for the rosettes and two smaller blue ones to decorate the pennant at the top of the layout.

The pennants were cut with the square punch - a tip I picked up from watching this demo by ChicnScratch , aka Angie Kennedy Juda, on YouTube. I haven't worked out how to embed a YouTube video in a post yet so here in photos is how it's done. 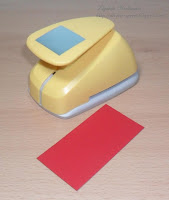 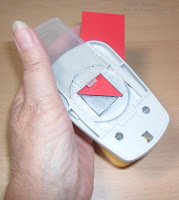 Position the end of the card on the diagonal into the corner of the square aperture as shown above. Punch out the triangle of card showing in the aperture. 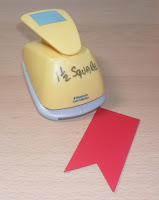 Result, a perfect pennant shape. Super simple with no need for all the usual palaver of measuring and marking out with ruler and pencil. Many thanks to Angie :)

So that's my layout - it's a simple design, very loosely based on Debbie's, with all the emphasis on that collage of amazing people who filled almost all my waking moments for two wonderfully exciting weeks.

My husband, Alan, remembers the previous London Olympics in 1948. He was 10 years old that year and  had to go to the local cinema to see the reported highlights on Pathe News. Britain had just been through WWII, it was a time of austerity and rationing, and televisions did not become widely available until the 1950s.  He tells me that the opening ceremony was an altogether simpler affair than that of this year's - the highlight for him being the release of thousands of pigeons all at the same time - an amazing sight as the flew up and away. Oh, how things have changed!

That's it for this evening. I have a couple of completed cards to share but I will leave them for tomorrow.

In the meantime, I bid you all goodnight,

Brilliant layout there Elizabeth I want to do an Olympic layout as well as a Paralympic one. You have given me some ideas and that pennant one is great.
My friend bought me a Union Jack album so I want it for 2012 events. I have photos of the Torch which passed through town so I have that to do as well. The first was, of course, my layout of my visit to the Ritz :0) xx

I love what you did with this layout...thanks for the tip about the banner pieces...they are so in style!

What a brilliant page Elizabeth, it really captures the spirit of the Olympics. I love you Christmas cards too and what gorgeous goodies from Canada :o)
Jackie xx

Elizabeth ,your layout is wonderful and a lovely memento of such a great event. Like Alan, I was 9 at the time ,but do remember it at the cinemas too. Hugs Rita xx

A fabulous page, I love it! Thank you for the tip about the pennant - what a brilliant idea. How cool that your husband has such lovely memories xx

A terrific layout of our fabulous Olympics! I love the rosettes, which, I agree, look nothing like pyjamas!