Well, we've had a lovely day out. Another day when the weather was phenomenal We headed for Rockcliffe down on the Solway Firth and it was so warm there was a heat haze. So, no crafty project today, just a few 'postcards' from the trip :) 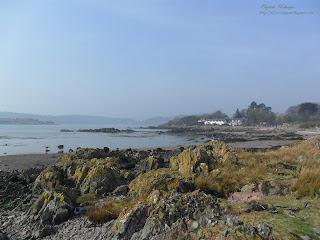 The island you can just see to the left of the photo is accessible when the tide is out.

On our way back we took a detour to the birthplace of John Paul Jones, founder of the American Navy. 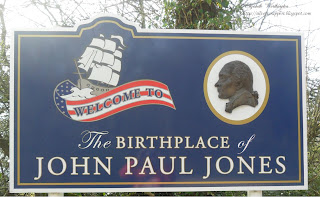 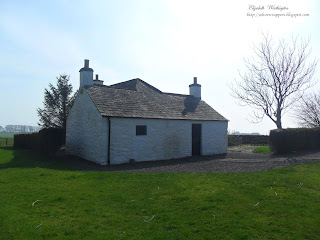 He was the son of a gardener so the cottage is very small - unfortunately not open to view until April so we plan to return. 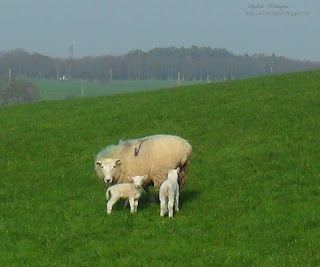 Finally, I managed to get a shot of these twin lambs on the way home - cute, aren't they?

I took a lot more photographs on the trip but I won't bore you with them right now and, in any case, I've earmarked a few as perfect for scrapping so you'll probably see them sooner or later :)

I hope you've all had a wonderful weekend and enjoyed yourselves whatever you've been doing.

I'm off to bed now - I take a while to get accustomed to the clock going forward so was up too early this morning - and I plan to read for a while. I'm reading The Descendants by Kaui Hart Hemmings - the one that has been made into a movie with George Clooney as the lead. I've not seen the film but I'm enjoying the book and, because I've seen the trailer for the film so many times, George is definitely playing the starring role in my imagination :))

Email ThisBlogThis!Share to TwitterShare to FacebookShare to Pinterest
Labels: Personal

Great pics Elizabeth , looks like you had a Fab day, those sweet little lambs awww!.
That hour has messed with my head today. Hugs Elaine

Beautiful photographs Elizabeth, we had a glorious day here in the English Midlands too :o)
Jackie xx

Great pics, love the lambs! I had a lovely weekend, went to football on Saturday which was glorious and sunny. So nice not to have to wear layers and we won too! The yesterday I sat out in the garden and read most of the afternoon. Beautiful. Plan on doing the same later, better than resting on my bed anyway. Zo xx

Hi Elizabeth , thanks for visiting my blog. It has been a while , but it was a rough period for me. But now I am coming back a little. I like your pictures and your story. I will be visiting you again. Love from Holland , Christa.

The weather is still glorious down her in Worcestershire. The perfume in the garden from the Osmarea Burkwoodii is incredible and just fills the garden. As for our bees, they are a real mystery. There are no plants or creepers on the walls, and nothing that has changed since last year. The walls have been replastered so there are no holes there, and it is fully carpeted, no holes there either. They are appearing on the opposite side of the room to the window, and are in no other room, even the ones with windows open. I am now investigating very carefully any piece of equipment before I pick it up. We got over the hour change problems by going to bed an hour earlier, having changed the clocks earlier in the evening. It seemed to work. Thanks for your sympathy. xx Maggie