Yesterday I posted Part One of The Great Tapestry of Scotland giving the background and the whys and the wherefores of how this magnificent work of art came to be. If you want to skip that here's some more information I thought of interest: The Great Tapestry of Scotland is currently the world's longest embroidered tapestry, 143 metres (469 ft) long. 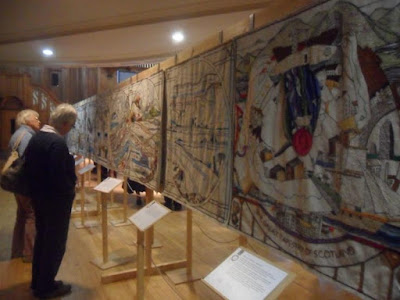 That compares with the Keiskamma tapestry in South Africa which is 120 metres (390 ft) long and the world famous Bayeux Tapestry which is nearly 70 metres (230 ft) long. Which explains why it took us two days to go round the whole display. Here's a few more photos taken of the panels.

Needless to say this is only a fraction of the 160 embroidered panels and, indeed, the limit was set by the quality of my photos. The entire tapestry include depictions of the end of the most recent Ice Age, 8,500 BC; Viking invasions, 9th century; the Battle of Bannockburn,1314; the foundation of St Andrews University, 1413; the Battle of Flodden,1513; Mary, Queen of Scots,16th century; the publication of the King James Bible, 1611; the Act of Union, 1707; the first and second Jacobite Risings,1715 and 1745. Also represented are many Scottish notables such as James Watt, Adam Smith, David Hume, James Boswell, Walter Scott. Then there is a panels depicting the Highland Games, the First and Second World Wars, Scottish Rugby, North Sea oil from the 1990s, Dolly the Sheep born 1996, and the recreation of the Scottish Parliament in 1999. And, finally, following his victory at Wimbledon in 2013, a panel commemorating Andy Murray was added.

It is truly an amazing work of art telling the story of Scotland's history from a unique perspective and well worth visiting if the opportunity arises. I believe it is currently on show in Kirkcaldy Galleries, Fife.

Hope the weather is good where you are and that you have a great Sunday.

Hullo Elizabeth, Sunday is over and it's bedtime, but was beautiful day for winter thank you, about 18c as was a cool southerly, (opposite to yours, southerly are our cold winds) sunshine made the difference.

Wow, just read your post below too, as well as this one, what an amazing piece of needlework ... something to indeed be admired. Have seen the Bayeux tapestry too, and so guess it's double that... From what I remember of the stats :)
Thanks for sharing, Shaz in Oz.x

I did like reading all the statistics on the tapestry. Amazing how it has all been put together. hugs Mrs A.

It really is wonderful isn't it. Such poignant reminders of the past too - G's family were Irish immigrants to Scotland after the potato famine. x Jo