Once again it's Friday Smile day over at Annie's A Stitch In Time and though I was unable to participate last week - due to circumstances out of my control - I can join in today :)

There's been a lot to smile about this last week, the most important of which is the change in weather - we're enjoying wall-to-wall sunshine! We had friends visit (no photo), we visited our niece's new home (no photo again!) and I've spent hours out in the garden potting up and planting out the hundreds (well, it feels like hundreds) of plants grown from seed. And Bonnie has been my constant companion in the garden too. 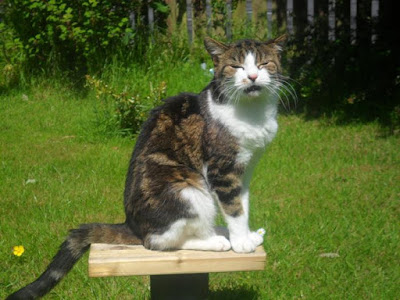 Here she is sitting on her little platform on the lawn, begging for me to pick her up for a cuddle. She's recovered well from the ear infection that was making her so miserable last month. She's not doing badly for her 16 years but she does have an inoperable cyst deep down inside her left ear which is causing recurring infections. The last was so bad it made her really ill and out of condition but after a couple of antibiotic and steroid injections for the pain she is back to her beautiful self.

Now on to my joke of the day:

In a trial, a Southern small-town prosecuting attorney called his first witness, a grandmotherly, elderly woman to the stand.

He approached her and asked, 'Mrs Jones, do you know me?'

She responded, 'Why, yes, I do know you, Mr Williams. I've known you since you were a boy, and frankly, you've been a big disappointment to me. You lie, you cheat on your wife and you manipulate people and talk about them behind their backs. You think you're a big shot when you haven't the brains to realise you'll never amount to anything more than a two bit paper pusher. Yes, I know you.'

The lawyer was stunned. Not knowing what else to do, he pointed across the room and asked, 'Mrs Jones, do you know the defence attorney?'

She again replied, 'Why, yes, I do. I've known Mr Bradley since he was a youngster too. He's lazy, bigoted and he has a drinking problem. He can't build a normal relationship with anyone, and his law practice is one of the worst in the entire State. Not to mention he cheated on three different women. One of them was your wife. Yes I know him.'

The judge asked both counsellors to approach the bench and in a lowered voice said, 'If either of you idiots asks her if she knows me, I'll send you both to the electric chair.'

I suspect that lady may be the Miss Marple of her small town :)

That's my smiles today - hope they gave you reason to smile too.

I also hope you are all having a wonderful day and that you have a very enjoyable weekend.

From personal experience I believe the law's an ass and doesn't this just prove it :-)...thanks for the giggle. Really love the pic of Bonnie...she looks so happy in the sunshine :-)
Hugs,
Annie x

Yes, I thought Bonnie was "talking" to you. Couldn't resist just catching her up and giving her that cuddle she wants so badly.16 is a good age.Our dear old boy was 17.I still miss him.
Love that chuckle.

This was SO clever, and it actually sounded very American. I loved it, and agree that she was probably the Miss Marple of the town.

So glad to read that Bonnie is better. Bleubeard and Bonnie are about the same age, it seems. He was sick for awhile with tooth infection, but that is gone now. Thankfully, due to a good teeth cleaning and antibiotics, the infection cleared up and they saved the once infected tooth. So glad she is on the mend and enjoying her sunny post near you.

Thanks for the good laugh this Friday. Have a great weekend, too.

Well Bonnie just looks like she has a big smile on her face. She is so gorgeous. I'm seeing quite a few pets today on Friday Smile and it's making me miss my 3 even more than usual. I had all 3 until they were 20, a ginger female, a huge tabby tomcat and a Jack Russell. I won't replace them due to all my travels to see my far off family.
Love the funny tale....
Have a great w/end,
Jo x

Let's hear it for little old ladies! That was a great one, Elizabeth, and so was your post about what you've been doing and how Bonnie is doing. She really is a bonnie lass and let's her it for her, too, at 16 years old!! Your gardening skills are inspiring!! Enjoy your sunshiney day!! Hugs, Darnell