In A Vase On Monday - More of the Same

Monday again and time to share with you and Cathy on Rambling in the Garden what's in my vase today. 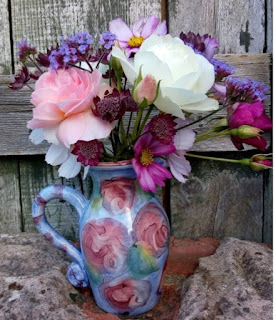 And really it's more of the same. Roses and cosmos have been featuring rather heavily of late but that's because they are both doing really well in my October garden. 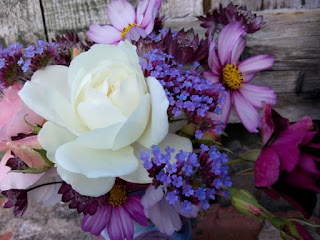 What is new this week is the verbena bonariensis 'Lollipop' which has happily set seed in the round bed returning year after year. 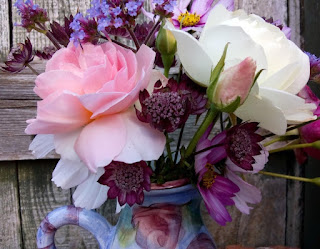 It's growing close to the plum coloured astrantia which I've also included this week. As it was a gift from a friend's garden I'm not at all sure of the variety but given it's appearance it could be 'Claret'.

A brief mention for the vase which you may have spotted a few times before ... it's a favourite. I don't know much about it - the marking on the bottom is illegible and no help at all. What I can say is that it was found in a Scottish Tourist Information shop, a very good source of local pottery, and the potter is based somewhere in Scotland, but no more than that.

Following up on last week's vase I can report that, apart from the godetia 'Little Frills' and the clematis and fennel seed heads, everything else has gone over. I must admit I'm rather pleased with the lasting power of the godetia. I only sowed the seeds as an afterthought this year and expected very little but, not only have they provided a bright spot of colour in a dull corner for much of the summer, they have also  proved their worth as a cut flower too.

What beautiful blooms Elizabeth, the colours are gorgeous and displayed so expertly. It's a very pretty vase and just perfect for this display, Kate x

Your roses are such good do-ers Elizabeth and it must be lovely having them so late on in the season, both in and out of a vase. Do I recall that Mr Silverscrapper has an involvement in the roses too? And another pretty vase to pop them into too - I checked out the link you gave me and was 'shocked' at how much our porridge bowls now sell for (they call them candle bowls..why?) but I may still buy a vase like yours which was quite reasonable, all things considered

What does it matter if this is a repeat if it is so pretty, I'm sure you are not tired of such lovely flowers.

Lovely colors and that vase is a perfect complement for them.

A gorgeous mix of flowers - so summery still. And your vase is really pretty too!