I'm delighted to have been asked to guest on the Design Team over at Pixie's Crafty Workshop where our lovely playground head, Di, hosts a fortnightly challenge to us to use our snippets - of which, I have a mountain! If you popped over from there, thank you, and here's the card I made for this week. 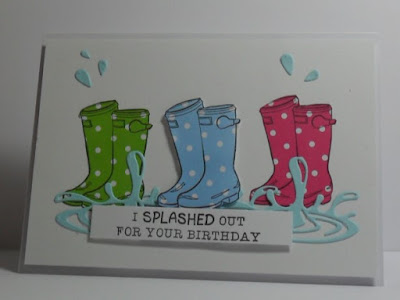 This card was made using the Make A Splash die, stencil and stamp set that came free with this month’s Papercraft Essentials magazine, Issue 158. This design is loosely based on card that also appears in the magazine ... I've adapted it to use up some of the many snippets of spotty paper in my stash. I got a bit carried away so there's several more pairs of Wellies waiting to make a few more cards.

I used the following supplies to make it:

- the Wellingtons boots were stamped with a Memento Tuxedo Black ink pad on three different coloured spotty paper snippets and then they were fussy cut out.

- the three puddles and the raindrops were die-cut from snippets of aqua cardstock ... there’s a tiny die for the raindrops – great for the teensiest weensiest snippets.

- the greeting was stamped, again with the black ink pad, on a scrap of white cardstock, then trimmed down to size.

- to assemble the topper I started by positioning and gluing the middle puddle and the green and pink boots to the topper. Next the left and right puddles were positioned in such a way that they just overlapped with the central puddle. The blue boots and the greeting were then attached with sticky fixers to give a bit of added dimension. Finally, I used some wet glue to position the raindrops fairly randomly.
- finally, the topper was adhered with sticky fixers to the card front.

Here's another card I made to use up a few more pairs of Wellies. 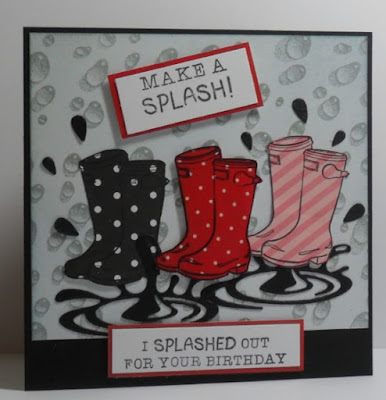 Here's what I used to make it:

- as well as the Make a Splash set I used Designs By Ryn's Water Droplets (CM-T3) stamp.

- the background to the topper was made by brushing the piece of white cardstock with the two distress inks then stamping it with the Water Droplet in London Fog.

- two puddles and raindrops were die cut from a snippet of black card and the two greetings were stamped, using Tuxedo Black, on a scrap of white card.

- to assemble the topper I glued the two puddles at the bottom of the inked/stamped card. Next, the black polka dotted boots and the pink striped ones were glued down on top of the puddles. The red Wellies were then adhered using stick fixers, again to give a bit of dimension. The topper was then attached to the upper front of the card blank, leaving a ¼" margin around three sides and approximately ¾" at the bottom.

- finally the two greetings were trimmed to size, layered on to some leftover red polka dotted paper and then adhered to the card using sticky fixers.

Here's a shot of the snippets I pulled out to use for these cards. 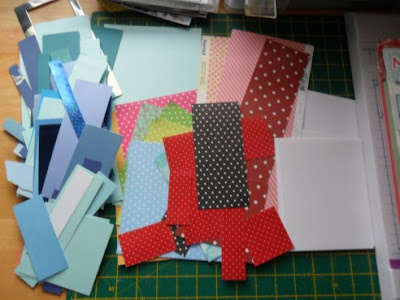 Needless to say, I've only used a fraction of them even though both cards are almost entirely made of scraps. I don't think there's much chance of me bottoming the scrap mountain any time soon!

Oooh, I love both of these Elizabeth! Thank you so much for being the 'Playground Snippets Princess' this fortnight - such fun to have you and a brilliant way to use up snippets. Why is it that other folk always seem to have much nicer snippets?

Two stunning cards - I've been playing with this set too, one of the most useful magazine sets I've seen for ages! Great way yo use some of your snippets.
Jane

Congratulations on your GD spot over in the Playground. LOVE your cards, the paper pieced boots are so cute. Great way of using up some of your snippets too. However many of my snippets I use, the mountain seems to keep on growing! xx

Hi Elizabeth, congratulations on your new DT role, and your cards are fabulous, I love the wellies, and they are so bright and cheerful, Kate x

Hi Elizabeth, two great cards for using your snippets up, love the colour combinations you used on them,Congratulations on being our lovely guest designer with Snippets playground, thank you for the inspiration... Have a wonderful week... Megan

Such lovely cards Elizabeth, thanks so much for GDing for Di xx

Love both of these fun cards Elizabeth. Hope you're enjoying your GD spot over in the Playground and are keeping everyone under control - especially Parsnip!

What a great Snippets GD you are, Elizabeth! Both your cards are sensational! I do love your Wellies very much!! From the sounds of things, you'll have to bring in a truckload of them to hand out at the Playground this week. You'll have to bring me two pair because every year I lose a pair in that big puddle that appears behind the bike shed!! Hugs, Darnell