In A Vase On Monday - A Winter Vase 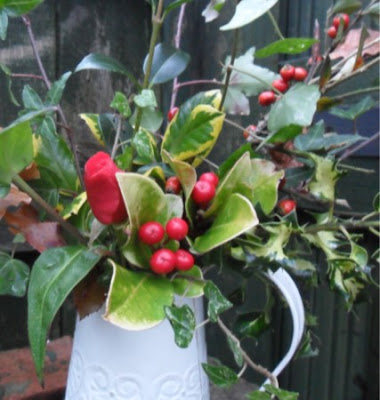 Truly it is winter in the garden now. The hailstone and snow showers we had during the week have all but finished off what Cathy, our In A Vase On Monday hostess, would call the hangers on.  I had to tiptoe through the snow and frost to forage in the shrubbery for materials for this week's vase.

I filled my vase with greenery from ivy, holly and osmanthus, berries from cotoneaster and skimmia and one lone stem of the wine red penstemon 'Tubular Bells' discovered surviving in a sheltered spot. There's a red rosebud from the rose 'Simply the Best' - one of a few that are still there but, I think, not for much longer. The leaves on my little green beech are now a wonderful coppery colour. They will all be gone soon so a couple of twigs had to be included. 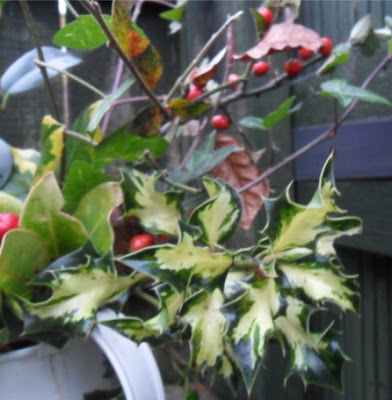 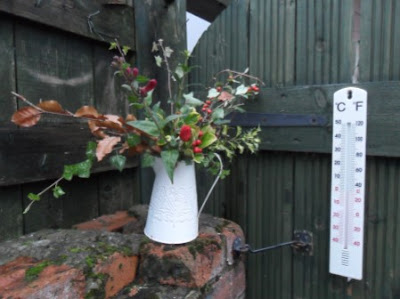 It really is cold out ... that thermometer is registering -2°C.


Many thanks, as usual, to Cathy for hosting In A Vase On Monday. Without her encouragement I would probably not be out foraging in my garden and sharing each week my finds with you.

Love your arrangement - wow is it really that cold up at your end of the world? brrr.. and do you have snow? I haven't watched the News for several days (been locked away making Steampunk Christmas decorations) - but down here in Essex its 10.2c outside at present :)
Gill x

Brr! We had one night below zero but daytime temperatures have been a few degrees above although yesterday's rain saw them rise a little, noy that it felt like it! No sign of snow yet... I love your jug of greenery and berries and hint of red bloom - and its good to be reminded that green is the mainstay of our gardens, whatever time of year it is. Thanks for sharing, Elizabeth