What's On Your Workdesk Wednesday - Week 641

Goodness, here I am actually in my craftroom for Julia's WOYWW and mid-project too. It's a miracle!

But before I show my desk here's an update on Alan and how he's been doing since his fall last week. You might have heard that the ambulance service is under pressure here in the UK so it will be no surprise to hear that the paramedics didn't arrive until 9pm, full of apologies for the delay. They quickly examined Alan, dressed his wounds, and decided that there was nothing to be gained from taking him to A&E. (That, it turns out, was the right decision as there was a total of nine ambulances queuing up outside the A&E waiting to have their patients admitted.) Today, Alan is very much on the mend. He's been seen by the district nurse, had his dressings changed and she will be back to check on him regularly until the wounds have healed. I've left him making up a station for his model railway. It's his 83rd birthday tomorrow. 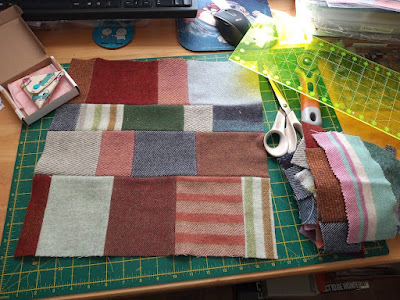 And now the desk. No papercrafting but sewing going on this week. I've decided it's time for a change of cushion (pillow) covers now that it's feeling distinctly autumnal. I've had those tweed/wool scraps in my fabric stash for several years with no real idea of what I'd make with them ... maybe a bag or something similar. There's a very nice remnant of tweed, price £4.50, that will make a lovely border and backing for the cover. I should have it finished to show next week.
The little box top left of the photo contains a wee sewing accoutrement I treated myself too. It's an origami triangle needle case made by Rachael of SewRayMe. Rachael's YouTube videos helped me through the dark days of Covid and it's aftermath when I didn't have the energy to do much of anything at all. And when she showed this little needlecase last week it intrigued me enough to want to add it to my sewing box. 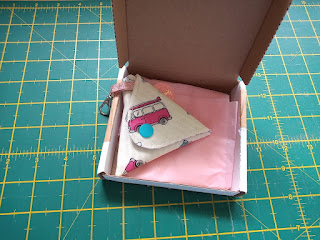 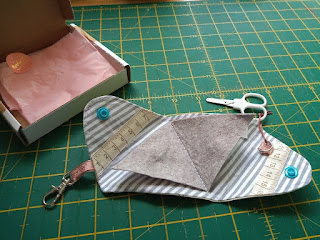 It's also the perfect size to pop into a handbag. Must find some pins and needles to put inside.
I also treated myself ... it's been that kind of week ... to this book. 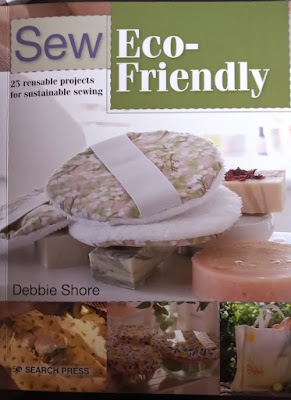 Another from Debbie Shore - Sew Eco-Friendly. I'm thinking of Christmas ... that dreaded word already ... presents for the girls in the family, and what better than to make items that are not only pretty but useful and help the planet too. This book is full of lovely projects that are easy and quick to make from toweling and old t-shirts, not to mention some of the pretty fabric I've been hoarding forever.
And now it's the kitten bit.  I recently bought her a cat tree but as you can see she has grown and now has to curl herself into a ball to fit on the top platform. 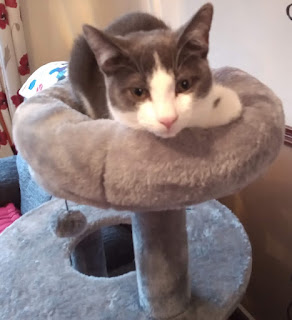 Not that she seems to mind. She sleeps there quite soundly for hours on end.
Which leads quite nicely to the funny for the week. 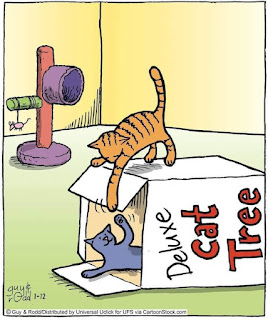 Yes, Silver never misses an opportunity to climb into a box.
Before I go, an update on how young Alun is doing in the new job. It's early days but he seems to be enjoying the work, and getting to know his new workmates just fine. They sound like a good bunch that enjoy a bit of a joke and chat with him and he's coming home full of stories from the workplace.
Have a good week everyone and stay safe.
Bye for now,
Elizabeth
Posted by Elizabeth at 16:30

I’m really pleased to hear Alan is making a good recovery. I haven’t heard what his job is....I must remember to ask you next time we chat. Love the cushion cover fabrics...well done you for finding the time for sewing. I love the little pin/needle holder....lovely design. Looks like we have both been treating ourselves this week....much needed I’m sure.
Hugs,
Annie x #13

So pleased to hear that Alan is recovering from his fall, and didn't have to go to A&E. Hope he has a very happy birthday tomorrow. hugs to you both. Helen #7

Empire of the Cat said...

Glad all your men are doing well and on the mend. One of my cats barely fits in the cat tree bed but it doesn't stop him from trying lol Loving your tweed, I have a box of it still sitting here next to me, with plans to make some kind of patchwork something, a throw maybe, but too much to do atm to get started Happy WOYWW! Elle #11 this week

Happy Birthday to Alan for tomorrow. Pleased he didn't end up in A&E as it's not a good place to be at the moment. My mum had a fall and had to go in. They kept her over night from mid day and only gave her biscuits to eat, she was not happy. They couldn't find her a bed elsewhere so she had to stay in A&E and at 93 with the problems she has this was not very good for her but they did their best. The cushion cover is going to look great when complete and the kitty is looking good too. I hope your week is full of crafty fun and happy woyww, Angela x5x

Thank goodness Alan is recovering at home with visits from the District Nurse. Happy birthday to him today. I love your cushion covers but I bet you knew I would! Take care both.x

Happy birthday Alan. I am so glad he is not the worse for wear after his fall Elizabeth but what a length of time to wait! Love the cat funny - what is it about cats and boxes? I have never met one yet that can resist them. Look forward to seeing all your eco projects. Meow to SIlver. Stay safe and happy WOYWW. Sarah #8

Good news about Aln, I hope he continues to improve.
Those tweed remnants are beautiful colours together. I adore the little origami sewing case. I’d put a shirt button or two in there and a tiny wrap of thread around a little card reel.
Take care; have a good week
Hugs
Lynnecrafts 3

Your cat is lovely too and the cartoon has it just right. Don’t they love boxes!
Hugs
Lynnecrafts 3

Your cushion is looking great. Love the cat funny! Angela #2