What’s On Your Workdesk Wednesday - Week 615

And good morning too. It's WOYWW time and I'm early - that is, early for me - with this pic of what's on my desk this morning. 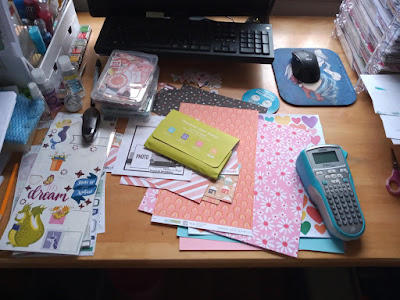 Not that much different from last week. There's a selection of papers and embellishments ready to be transformed into yet another scrap page using the sketch you can just see tucked under the pack of photos. That is, once I've chosen a photo from the pack ... I had chosen one, laid it aside for later, and now I can't find it anywhere!
And there's the labelmaker. 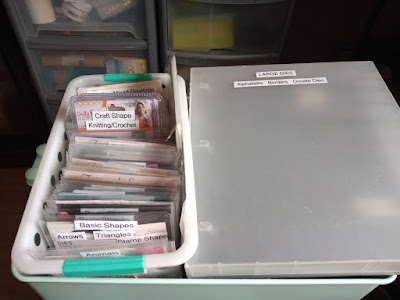 The organising continues. This week it's my collection of dies. I've been sorting and labeling the smaller ones into plastic CD sleeves, the larger ones onto magnetic sheets in that box. It's been illuminating. I had no idea just how many there were and how many had never been used - ever. So, they now have a new home on the top shelf of the trolley where it is hoped they will nag me into using them more in future. It's a plan.
Given that I'm still sticking to a spending freeze there's no new crafting goodies to show so I thought I'd show you the EM's new toy instead. 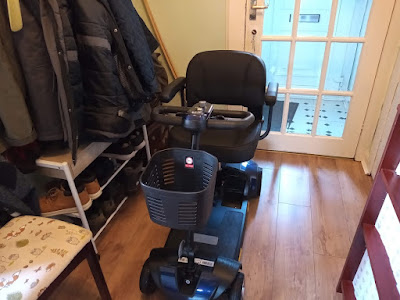 Yep, it's a mobility scooter. He's looking forward, as restrictions are slowly lifted, to getting out and about again. In the meantime, he'll be able to get around the supermarket so much quicker and easier. As I write this post, he's out on his first practice run - just around the block to start with!
So, and finally: 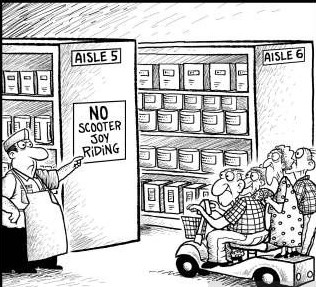 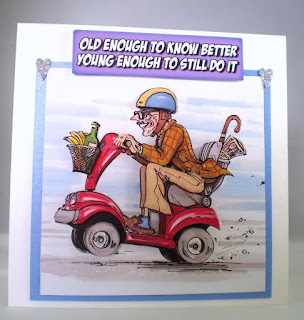 Whatever you're doing today have a wonderful WOYWW and a fabulously crafty week.

Hi Elizabeth. I do hope you find that photo!! Great sorting with the dies - that's my next task, when some storage comes... The EM's scooter - BRILLIANT! John had one for years - he drove for miles on it - unfortunately it didn't fit me on for the joy riding... but we went everywhere with it. I took it apart, put it in the boot, we went up hills and down dales - only once did we get stuck and I had to really push it out of a sticky place. But it opened up so much more for him in the last years of his life when the bronchiectasis was getting so bad. We had a motability car too, and in the end, the motability folk put a hoist in so I didn't need to keep lifting the scooter out in four bits! That was FUN! I do so hope hubby enjoys his new toy, gets out and about in your glorious country, and doesn't leave you too far behind.
Take care both of you. God bless.
Margaret #1

Oh that's brilliant. I've just read Margaret's comment too. Let's hope you can both enjoy getting out and about as the weather warms up and restrictions are eased. I hope A is feeling better this week. All fine down here although I did trip and do a nose dive in the garden yesterday. No harm done thankfully - just needed a full change of muddy clothing! Take care and stay safe. xx Jo

I spy some Shimelle there Elizabeth! I hope you find the photo, you know it will be somewhere daft don't you. Good news on the scooter - I'm just looking into one for my Dad. After years of me nagging him to get one he finally announced he had decided to get one as if it was all his idea. Apparently that's what we have to do with chaps, let them think it was their idea all along... Stay safe and keep smiling, Lisa-Jane #8

I’m loving Alan’s new toy and hope he’s feeling much better this week so he can enjoy using it lots.
Big hugs to you both,
Annie x 14

Great that Alan has his new toy. We have a friend whose husband point blank refuses o get one and it’s become very difficult when we meet for coffee (used to) as he really can’t walk very far. I keep losing things too-I think my concentration has deserted me now that I have all day to do nothing! Looks lime it will be May before we’re allowed out of our home area-fingers crossed everyone behaves and we’re not locked down again. Happy scrapping. X

Loving your husbands new toy - hopefully it will open up so much more opportunity for you both to get out and about. I hope you find the missing photo. Happy WOYWW. Take care and stay safe. With love & God Bless, Caro x (#12)

Oh my a label maker....now I know I have one of those somewhere! I really must sort out the stuff that I've had for years. They seem to get forgotten and yes I know it's bad Lol! Do you really think the EM will behave like the funnies Lol! they are good though. Hope he got back from his test ride okay. Have a lovely week and a very happy woyww, Angela x18x

Loving the scooter, hope the EM has fun with it and doesn't go hellraising (great funnies!) Well done on your continuing sorting. I really must make a start.... Helen #3

Mobility Scooters are brilliant for giving a bit of freedom. I must warn you however, that you suddenly become invisible when you are riding one. Other pedestrians walk right in front of you! I sorted all my dies a while ago and I haven’t actually used any since! Have a great week Angela #17

Hope that photo turns up elizabeth. I love my label maker too. I have all my ink pads labelled on the side so I can find them easily. They are useful for art journal pages if I need a specific sentiment printing too. Hope the other half gets to grips with his new scooter. Stay safe. Saarh #6

Two fabulous funnies to end on Elizabeth - hope Em has taken off his L-plates and is ready for the supermarket soon.
You store your dies in much the same way as I do. I don't have the plastic box but use a box that stored my friends supply of coffee in it. She had these long boxes everywhere and I nabbed one or two from her one year before she passed.
Keep labelling ...
Hugs, Neet 15 xx

How lovely to find new dies you’d forgotten about!
I love your cartoons, they made me laugh, especially the joyride!
Take care, stay safe
Hugs
Lynnecrafts 7

Organizing all your dies is quite the project, but you'll be glad you did! The labeling really helps, and I sorted mine by things (animals, flowers etc.) in one box and just shapes in another in alphabetical order. yes a little over the top, but I love it! I hope he enjoys his new scooter, that's wonderful. Blessings on your week ~ love, Karen #29

oh the images at the end of your post, what fun he could be having round the block!!! Hope you find your photo soon, must be so annoying. Don't think I have any dies I haven't used, usually have a play when I get a new one, although trying to reuse some oldies. Thanks for the visit BJ#9

I'm trying to sort things out and put them in rheir own space, only I've run out of space...then I forget where I've put them! Lovely colourful papers on you desk. Stay Safe! Keep crafting. Happy late WOYWW ((Lyn)) #19

Well done with the organising, Elizabeth, and your hubby's buggy is brilliant! I've got 2 buggies - one big one inherited from my uncle that I can only use from home as it won't go in the car, and a small one that will go in, but I don't really use that one now since I got my all-terrain Trekinetic wheelchair (hi-tec really alternative fun job!) - I also have my regular wheelchair. We need to get rid of the small buggy really - my hubby complains the garage is full of buggies!! I have more wheels to my name than he does. Not that I've used any of them recently because I've scarcely been out. Not that I'm complaining because I love being at home and there's always more than enough to do, and boredom is not a word in my vocabulary.