What's On Your Workdesk Wednesday - Week 450

Another Wednesday, another late WOYWW - I did start writing this early morning but several interruptions later and it's almost bedtime. Sigh! So I'll make this as quick as possible but it will be a fairly photo heavy post. 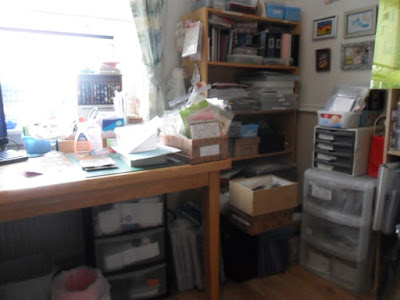 As you can see, the craftroom isn't such a shocker this week. The sorting out is not entirely finished yet but several black bags have made their way to the bin and it's looking much more manageable than it did. 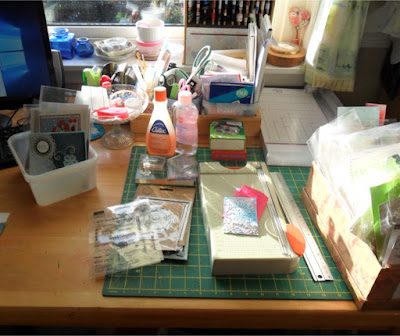 Even the desk is looking a tad more organised. A desk bathed in sunlight too. We've had the most amazing weather this last 24 hours - snow, hail, thunder, rain, wind, overcast then sunshine. That's Scottish weather for you!  I've been cleaning the stamp blocks, hence the varnish remover and the baby oil ... to help remove the sticky stuff used to aid grey rubber stamps stay put. The box you can just about see on the right is full of scraps, leftovers and snippets all destined to be changed, somehow, into cards. Like the ones already done in the box on the left. Under the stamp set is a pile of dies that were used in the making of a couple of those very cards. On top of the guillotine at the front is this beautiful Swap ATC made by a fellow WOYWWer, BJ. 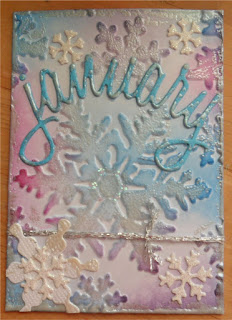 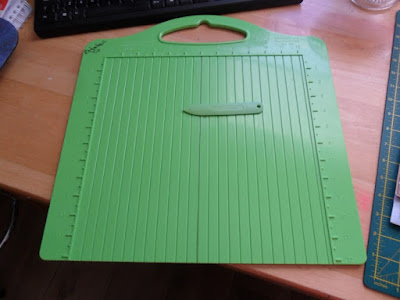 Seems I set our revered Head Desker, Julia, on a bit of a train of thought when I mentioned that whilst cleaning out stuff I'd come to the conclusion that what is a crafter's 'must have' one year eventually becomes a forgotten 'has been' tucked away on a shelf where it takes up valuable space. For Julia her Scor Pal was an example of a 'must have' but now a 'has been'. I have to admit that my Hougie Board would be a 'has been' if it wasn't for the fact that I dug it out to use again this week. 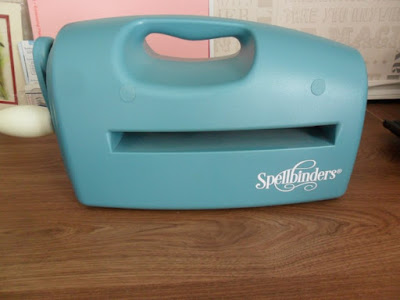 No, I reserve that title for the above, my Grand Calibur. I bought this to use with over-sized embossing folders and large dies but I rarely find a use for either so this machine lies on the cutting station taking up valuable space. Should have listened to Julia ... she did warn me!!!

Two audio books listened to this week (this seems to be taking a regular weekly spot). 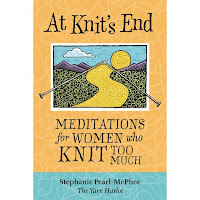 From the pen of Canadian blogger Yarn Harlot, Stephanie Pearl-McPhee offers 'observations, meditations, reflections and rants to soothe and delight the knitter's unraveled soul.' I first discovered the Yarn Harlot on a trip up the coast a couple of years when we stopped in a cafe/craft shop in a tiny village almost in the middle of nowhere. And glad I am too. I find her an entertaining writer.

This was supposed to be a bit of light listening during the festivities but it got sidelined by several other books. And it would have been the perfect seasonal tale with the theme being 'can knitwear mend a broken heart'. It's a bit of fun and I'm enjoying it - there's some very nice characters, Sybil, Hettie, Cher, Ruby, Marigold and Dr Darcy. And, of course, there's a dastardly nephew, a traitorous ex-boyfriend and a deceitful twin sister. All that with knitting too!

Well, that's me for the week. I hope you have a wonderful WOYWW and a happy crafty week ahead.

Well done you with the sorting my friend....and you’ve had time to listen to two books....I must look into these books. I’ve so much work at the mo that by the time I’ve finished it I’m too tired to sit and read.
Hugs,
Annie x #9

Hi Elizabeth, the clearing and tidying seems to be on everyone's mind at the moment. I don't use my Grand Calibur very often but can't get rid of it as I have quite a few large dies and embossing folders. Hop you have a very creative woyww whatever you get up to, Angela x14x

Your craft space is looking very organized Elizabeth, I'm very overdue for a clean up myself! Still got christmas stamps on blocks waiting to be cleaned and put away and piles of stuff everywhere! I must get stuck in as it's so much easier to think when you're not surrounded by mess lol! Have a great week, Cathy x

your taste in reading is very like mine, i will search this one out! I know that when I get further with my clear out I will find various 'must have had never use' items... what are we like! Helen #1

Hi Elizabeth. Those books look great - might try the local library for them... sounds like fun! You've certainly been busy this past week. Much to go, and then a neat room to show for the hard work!
Take care. God bless.
Margaret #2

Hi Elizabeth, I must admit that my Grand Calibre gets a regular work out in preference to my electronic die cutter. One of these days I will have to make up all those card kits that I bought when I first started out. They would do for charity fund raising. I don't find them much fun to make up though; far too lacking in creativity when it's all done for you. Good luck with the rest of the tidying. Sarah #6/26

We all must have a fortune's worth of unused stuff in our cupboards! The books look great - I am trying to get back into my reading habit and have a mountain of books Max passed on to me. Where does time go?! xx Jo

I too have a couple of the has been, but still have difficulties with throwing it away,as I invested in it and I think maybe one day..., have a lovely weekend, Vicky#5

January seems to be the time of year for sorting! I think the one item I bought but almost never use anymore is my Xyron sticker maker - the only thing I use it for now is when I use vellum, which is hardly ever! But it doesn't take up much room, so I will keep it for now! Have a great week, Lindart #30