What's On Your Workdesk Wednesday - The 70th Birthday One

This has got to be the fastest post ever because I have only a few minutes to spare. It's been a bit of a whirlwind day because, as many of you will know, it's my birthday, and there's been a lot of celebrating going on. But I just had to participate, however late, with Julia's WOYWW, over at The Stamping Ground, so that I could thank everyone who has sent birthday wishes. They've turned what could have been the most depressing day - 70 seems so ancient - into a not so bad after all.

So it won't take too much guessing to work out what was on my desk today. 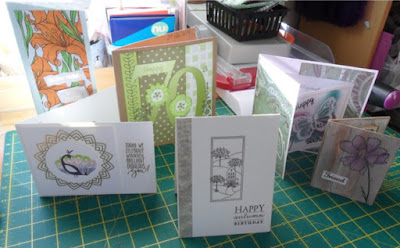 These are the beautiful handmade cards I've received from some very talented crafters - many of whose desks frequently appear on WOYWW.

Not from a crafter but stunning nonetheless so I thought I'd share them with everyone. 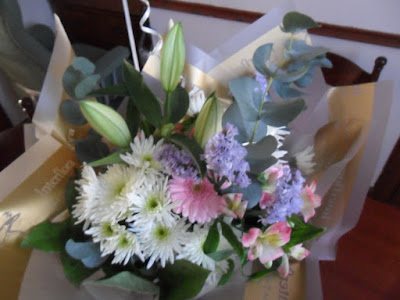 Aren't they gorgeous? They're from my son, his wife and daughter. They know me so well because down the side of the box they arrived in was a little surprise. 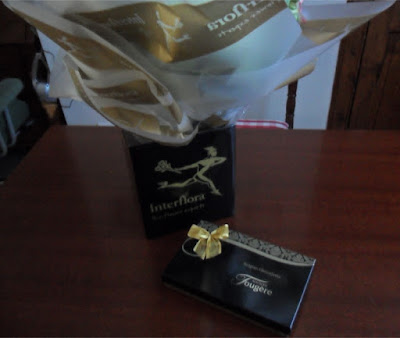 Belgian chocs. A lovely treat for someone who really shouldn't!

That's me for today. I said it would be quick. The day is running out fast so I'll be along tomorrow to check your desks and leave as many comments as I can.

In the meantime, hope you've had a very happy WOYWW and I wish you all a very good week ahead.

Wishing you a very happy special birthday Elizabeth. I hope you're having a lovely day. Lots of beautiful cards and Belgium chocolate too. What more could a girl ask for. Enjoy! Barbxx

So glad to hear you’ve had a special day and been well and truly spoilt....just what you deserve my friend. Your cards are really lovely and your flowers are beautiful.
Biggest birthday hugs,
Annie x #11

Hi Elizabeth, off you go girl and enjoy your birthday. Gorgeous cards, flowers and chocs. Have a great and very creative Birthday woyww, Angela x12x

Happy Birthday! What a lovely group of cards and such a sweet gift of flowers and chocolates!!!
Carol N #25

Happy Birthday! just what I want , flowers, chocs and lovely cards! it's only a number!
robyn 3

Hope you had a fabulous birthday Elizabeth. 70 is the new 50 so I wouldn't feel depressed about it. I only have parties in years ending in 0 so I'm actually looking forward to my next one LOL. Happy WOYWW Sarah #9

Great birthday post dear Eliazabeth, and you should revel in your three score and ten, quite an accomplishment indeed! Gorgeous cards and flowers, well done, birthday girl!!
Thanks for sharing your desk!
Shaz in Oz.x #1

Phew - you were OK with the card, I think we ought to be proud of our age, all that life experience and hoards of memories. So glad the day turned out better than anticipated. Love and hugs. Thanks for the visit BJ#4

When we were young, 70 did seem ancient, but it doesn't now, and you and Alan both totally belie your ages anyway, so no matter. Just happy happy days. xxxx

Yes, but you're 70 on the outside and in your 20's on the inside - you are such a young person in outlook, it comes over whenever you speak. Those cards are gorgeous as are the flowers!
Hugs LLJ 13 xxxx