In A Vase On Monday - The Last of the Roses

I wasn't going to join in with In A Vase On Monday today, at just 2 degrees above freezing it was too cold to venture out into the garden, that was until I read it was the 4th Anniversary of Cathy's meme - I couldn't let that pass without celebrating. Like so many, I have to admit that this weekly display of vases has made a difference to the way in which I view the plants and flowers I grow in my garden. Not that I've been participating these last few weeks ... not only is it too cold, and dark for most of the day, but after taking a tumble recently I've not been able to potter about as much as I would normally. And that means I've not been out to pick anything today so I thought I'd post this arrangement from a couple of weeks ago. 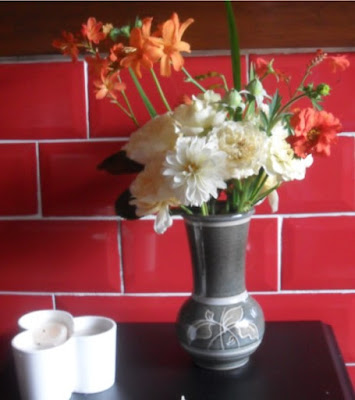 It's not a particularly wonderful arrangement but it includes the last of the cream 'Patricia Kent' roses. Our roses have gone on blooming long after what is normal this year. Here we are in the middle of November and Pride of England is still flowering with no hint of giving up yet. Perhaps the the drop in temperature last night - zero degrees - might put a stop to them. 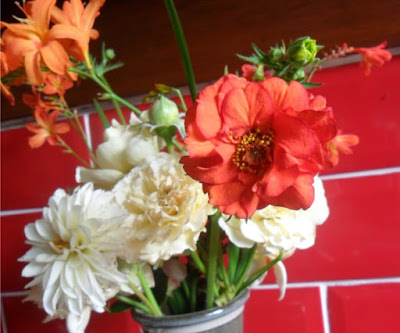 There's a single white dahlia - 'Moulin Rouge' without the rouge. A bit of a mystery that. Neither of the two blooms we got from that tuber were true to the description given or the illustration on the pack. However, as I'm such a failure at dahlia growing any bloom was at bonus. The last of geum 'Mrs Bradsaw 'and crocosmia 'Okavango', though very badly arranged, added a bright autumnal touch to the cream blooms.

The Denby pottery vase the flowers are in is another of my many charity shop finds. I liked the subtle shades of green, the leaf pattern, and the unusual shape. I also like that it came from a Derbyshire pottery - we lived in the High Peak area of Derbyshire for a time so it's nice to have a vase to remind me of the lovely times we had there.

Hopefully, I will be able to join in again next week. Unless, that is, everything is frozen solid by then and the way the temperatures are dropping that would be no surprise at all.

Have a wonderful week whatever the temperature is wherever you are.

Email ThisBlogThis!Share to TwitterShare to FacebookShare to Pinterest
Labels: IAVOM

How lovely that you still have things to collect and so colourful. Thank you for inadvertently introducing me to IAVOM last year and I hope you'll be pottering around again soon.

It's a lovely arrangement, made more so when viewed against that warm red background. I hope you're on the mend and can get back to puttering in the garden soon.

Sorry t hear you have taken a tumble - how frustrating not to be able to pottter as normally might, although of course it is increasingly likely to be unpottering-about weather. Thank you for sharing some of your last blooms - how odd about those dahlias! My Mrs Bradshaw stopped flowering ages ag0 so yours has done well