Afternoon to you all.

Still catching up on makes not shared yet, this card is one for Pixie's Snippets Playground - Week 211. 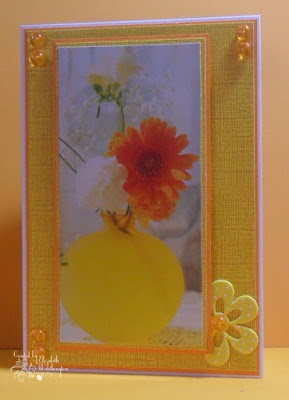 I kept the original, shop bought, get well card received last year because the image of the flowers in a dazzling yellow vase cheered a sick me up back then ... just looking the bright sunny colours were a pick-me-up ... so with the horrible weather and dark winter's days we've been having I thought it might cheer you up too.

What I used and did to make it:


Of course, this was a really quick and easy card to make ... I admit it's quite some time since I made a time-consuming and complex card.

Oops! Just realised the time. Pointless will have started so I'm off now but will be back later.

Take care and have a lovely evening,

I love this cheery and colourful card Elizabeth! Certain to make anyone feel better (and I hope you're improving too?). Ha! I'm an avid Pointless fan too!

I hope you had a good Christmas and wish you all the best for 2016.

Life is very busy here wedding wise and our time away at Christmas hasn't helped .. .. but we really enjoyed it and my batteries got nicely recharged.

Sorry for being such a stranger here nowadays. There just doesn't seem enough time in a day to do everything I would like to.

Great up-cycling of that birthday card Elizabeth. It would be a shame to just throw the original away!

Take care and I hope all is well at your end.

You can almost imagine sitting in the sun when you look at your card Elizabeth, great recycling

Wahoo . . .what a lovely splash of yellow. No wonder it cheered you up. Great recycling.