A Belated Good Day All,

I hope you are all well and enjoying WOYWW today.

What a difference a week can make! Last week early, this week late. My get up an go has failed to put in an appearance today and I'm struggling to press the go button ... so reporting in late Julia, but here at last ... Stamping Ground is where the action is so hop over and join in the fun. 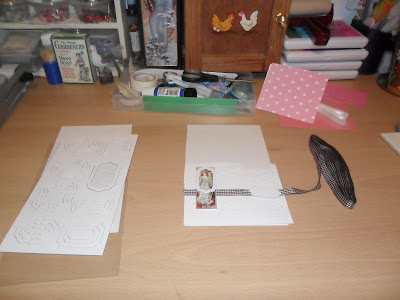 This was what was on my desk in the wee small hours of the morning - not a lot! 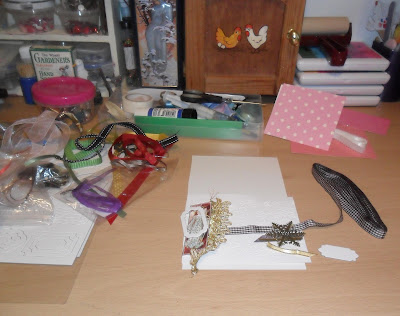 This is what is on it now ... not much progress has been made. I've gone from working last week on a large project, 12"x12" scrap layout ... click here for the link  for those who said they would like to see the completed layout - I kept the flowers as so many of you said I should ... to something very small this week, a 4"x4" card. It's an attempt to use up some of the little bits and bobs, too nice to bin but too small for most projects, that are squirrelled away. Bits of ribbons, small images, pieces of embossed card accrued when putting the Cuttlebug through its paces shortly after it arrived ... that sort of thing. Because, if I don't use them up, very shortly I'll be drowning in a sea of teeny weeny bits :)

I hope your Valentine's Day was a good one. We had a lovely time and enjoyed our lunch out immensely. Here's a couple of photos I took while at the restaurant ... the plan is to make a layout incorporating them at some point ... just not today ;) 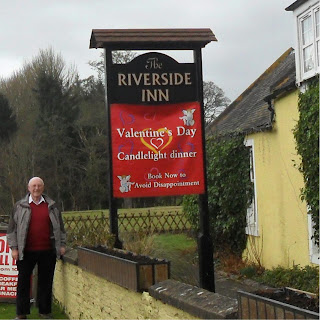 Alan looks as though he doesn't know what to do with himself ... I just wanted a nice shot of him by the sign :) 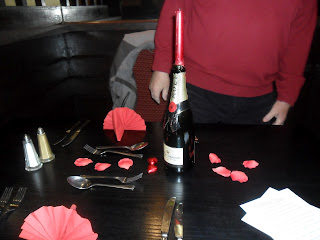 Rose petals and chocolate hearts were awaiting us once we got inside.

Okay, that's me for this week but before I go I would like to thank everyone who left their good wishes for William and Arihanna. William is recovering well from his operation and little Arihanna is beginning to recover from the infection now, and should be well enough for the planned operation fairly soon.

STUNNING! your layout from last week, Beautiful!, love the card on your desk, that looks as though its going to be lovely! So glad you enjoyed your Valentine meal together! Have a great week, Hugs May x x x x

I'm late this week too, but only 'cos the weather's been so nice we've been in the garden, what luxury after last week. I hope your get up and go has returned after your walk, Elizabeth. The fresh air is lovely isn't it?
Your LO from last week is gorgeous. I'm so glad you kept the flowers and I recognise that sentiment, it fits perfectly doesn't it?
How lovely to go out for lunch yesterday. I'm glad you enjoyed it. We had a special tea and I got DD to take a photo so I could scrap it too. See great minds think alike.
Happy WOYWW
Hugs Lisax #133

Looks like you had a great Valentine's Day. Chocolate and roses!

Looking forward to seeing your finished card. I'm glad you had a nice valentines meal. My desk is very inactive this week, not doing well at all! xx

Hope the little ones continue to get better,hugs trace x 51

Hi Elizabeth,
Oh how sweet your hubby is. He just wants you by his side! Love that his sweater is red!! Very appropriate.

I thought I was early this week Elizabeth as I was up and posting the link at 6:45 but I'm still 57th on the list. That will have to do as no way am I getting up earlier than that. Hope you enjoyed your Valentine meal - lovely touch to have the rose petals.
Ann B
#57

Lovely to pop in and see what you're up to. Glad you put the link to the LO - it's fab. Glad you enjoyed your meal out - we also went out for a Valentine's Day lunch (Hazel, WOYW #136) x

What a nice valentine dinner for you and your husband! Here we usually have a get together with my family. It's just such a big hassle to go out and brave the traffic to go out and eat! For my first valentine dinner after i got married, we went to favorite restaurant, only to find out they changed the settings to small tables for two (quite crowded) and the menu (smaller sizes)and so we never did it again! Patsy from
HeARTworks

Great desk. Hope you had an amazing valentines day

How lovely to go be met with such a thoughtful touch on your dining table! So glad you enjoyed your special meal - you romantic devils, you!
Hugs, LLJ #72 xx

Glad that you and hubby had a lovely valentines day lunch, have a great week Lou @#91

Yep, it's always a good idea to keep ahead of those teeny weeny bits! :)

Looks like this will be a lovely little card. last weeks 12x12 layout was fab. I have a similar picture to that, in my family room My uncle took the photo and we had it blown up.

Glad things sound a bet better with the children...fingers crossed.

Your Valentine dinner looked very romantic ;) and you know, I hate it when my "get up and go" gets up and goes without me! lol Love taking a peek at your workspace, waving hi from the hills of North Carolina :)

Elizabeth, you have such a full plate, but at least this week there is a bit of good news. Of course, there is also a bit of love and hearts in the mix, too. Glad you had a great Valentine's day. Happy WOYWW from #3.

creative desk! Looks like an fun time for your valentines dinner! Hope you have a great week and thanks for sharing. Don't forget my blog candy is still up for grabs so drop by and leave a comment and make sure you are a follower. Vickie #64

so many nice bits get stuffed in my bag of scraps too. I am sure i could make stuff but i dont have the time at the moment.
thanks for the award the other day. I will get it up on my blog when i get a moment.
caroline

You probably captured the moment when your lovely man realised that he was colour co-ordinating with the sign and therefore a perfect scrapbooking subject!! So glad things have settled a bit with the children's health...relief. I do have a rule about the little bits....i don't keep them!

So glad the little ones are on the road to recovery ...such stress and worry ...thats probably why you feel a little down. So pleased you had a lovely romantic meal for Valentines with your hubby ...take care xx

Lol to Julia's rule! I can't throw anything out I'm afraid. Glad to hear the GC are progressing, fingers crossed for Arihanna too. Looks like a lovely meal out, did your husband wear the red jumper on purpose??

hope you are feeling revitalised b y now and glad to hear about W & A. I think we need some warmth and sunshine but that will come!
There's still enough on your desk to keep you busy for a while!. I think this is my 2nd visit but don't think my 1st comment transmitted so thanks for visiting me.
Home, warm and missing my family over there. It always takes me a week or so to get over the blues.
JoZarty x

Ooops, catching up on WOYWW here! Great that you had a lovely Valentine's Day outing - if I snap Len he usually puts a silly smile on to spoil the photo :(

Good news too about A and W.

Hi there Elizabeth, I do love your work up above so energy returned a little - great job! TFS and happy WOYWW! Shaz in oz.x thanks for popping over too.

I know there's always something fun and creative happening on your desk so it's a joy to pop by. Fab pics too. Take care, thanks for sharing & hope you enjoy this week's WOYWW. Zo xx 86

Hi lovely pics, looks like you had a fab valentines day hope you have a fab week
Anne-marie no 121

My Father had a file of things that tickled his funny-bone. One of them was a poem called "My get up and go has got up and went". If I can find it I'll post it on my blog - it probably fits any of us at some time or other. You have a card of nesties cut and ready to go. I haven't got into the nesties much. Lunch looks lovely.
I'm very late this week. It always takes me a while to do the rounds, but sorry I left your link so long.
Best to you,
Ros. (69) think I slipped back a couple. Goodness knows how.

What a nice Valentines Day! Also a nice work space on your desk. Mine is a bit crammed full of stuff at the moment. Like that never happens! lol

A great way to use up all those wee bits and pieces - good luck!
Looks like you had a lovely Valentines Day!

Thanks for stopping by my blog!

thanks for visiting my blog/desk.
Yes those scraps when used on the next card will produce more scraps/snippets, but a 1/4 sheet of cardstock I'm not wanting to toss, but a 1" pce I have no problems tossing BIG GRIN.

Lovely project on your desk. I find making something from snippets or bits and pieces is a very lengthy endeavor. Have a great day and hope you get back up to speed.

Hi Elizabeth in Scotland -- have you finished your scrapbook spread yet? I enjoyed looking around your blog; problem with me is -- I keep forgetting to take pictures of my workdesk, oh well. Blessings Terri www.morningdewdrops.com