I've been thinking about the Scrap Our Stash Challenge for February, the theme of which is the word leap. Now, this could be interpreted any which way you like, e.g. leap year, leap as in to jump, i.e. literally as bungee jumping or leaping out of a plane,  or simply trying out a new crafting technique/style/supply, etc. So far, this last month my leaps have been in trying a new crafting style - shabby chic - and basing a layout on photographs taken on the first day of a leap year - 2008. However, what the theme really got me to thinking about in particular was this old layout. 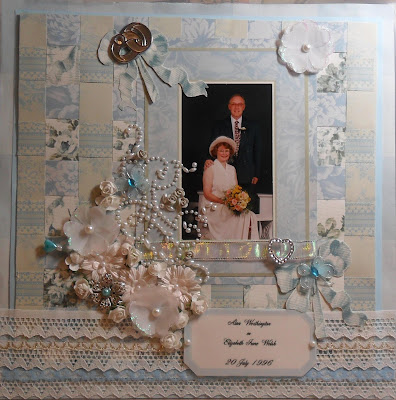 I don't think I've posted this layout in it's entirety before, although I think I may have posted a snip of a really bad photograph taken with my old camera - new camera, better photo - but the story of how the design developed illustrates my development as a scrapbooker. I hope you'll bear with me as go through the story :)

The photograph: As you can see it's layout of one of our wedding photographs and we married in the summer of 1996, a leap year. Not only that but we got engaged in February of that year ... no, I didn't do the proposing as would have been my  leap year prerogative ... no, that was all down to Alan. When he proposed we were an ocean apart - he was in England, I was in the USA at Wellesley College, Massachusetts, where I was studying.  I was a student when we met in 1994, a very mature student ... in my 40s! ... at Manchester University, reading American Studies for an honours degree, and an important part of the degree was that the third year was spent studying at an America university ... in fact earning an honours depended on it. They say that absence makes the heart grow fonder, and it clearly did for us, hence the proposal :)

The layout: It was also at Wellesley that I discovered scrapbooking. My fellow students were into it in a big way and I was hooked from the first. I thought it was such a lovely way to display photographs compared to the boring plastic folders I had at home. It wasn't long before I purchased a few basic items and some books and magazines on scrapbooking, but that was it. It wasn't until well after I returned to the UK that I got around to buying patterned paper! My first purchase was the Anna Griffin kit that I used in this layout. It came with instructions, which is just as well because I didn't have a clue! To make the background I had to cut the DP into strips and weave them together and even the bows had to be cut from the DP ... talk about going in at the deep end, without benefit of water-wings!!! I couldn't have chosen a more difficult design to start with. With the addition of the journaling label that was it. No flowers, charms, lace or ribbons - nothing!

I put the page away and for several years forgot about it - I was too busy with my finals, and then with working, to find time for scrapping. So it wasn't until I started to think about retirement - an event that finally happened in 2009 - and how I was going to fill my time that the urge to scrapbook was revived. And what a revelation it was to find that in the intervening years scrapbooking had come a long way even in the UK. By then there were websites dedicated to scrapbooking, crafting blogs, online tutorials and demos and craft shops stocking lots of lovely papers and embellishments - I couldn't have retired at a better time :))

After a year or two of looking and learning I dug out this layout and added all the lovely embellishments. By that time I'd been experimenting with decorating pins with beads and making flowers with paper punches ... the ones in the layout are made from punched heart shapes in white vellum edged with crystal Stickles.

I think the finished layout is vastly improved and now it's a treasured page in my heritage album ... well, it will be a heritage item to my family one day!!!

So there it is, a scrapbook page that depicts, not just one of the happiest and most memorable days in my life, but also my development as a scrapper, and I just love it - it will always be my favourite page, despite all that paper weaving!

I confess that most of my first attempts at either scrapbook layouts or cardmaking are dire and could do with a revisit. Have you got early projects that would benefit from a makeover? Dig it out, take a second look, perhaps there's something you could do to improve it, and blog the transformation, let us see the finished project.

I've a busy to-do list for today. Because the EM put on his handyman overalls yesterday and laid new flooring in the bathroom I spent my time being a domestic goddess, that is, head chef and chief bottle-washer ... you know, soup-making, tea-brewing, handing over tools and offering advice on the best way to lay a floor :))

So today I'm catching up, but only after I make another cup of tea :))

Email ThisBlogThis!Share to TwitterShare to FacebookShare to Pinterest
Labels: scrapbooking

Your layout is just Beautiful and your story is lovely Elizabeth x x x I bet the bathroom floor looks great... enjoy your cuppa, Hugs May x x x x

Oh Elizabeth this is so beautiful it's a shame it's hidden in an album, it should be in a frame displayed in a place of honor. Lovely layout, lovely colors, all surrounding a lovely couple. Have a wonderful weekend.
Hugs & Blessings
Bernie

It's absolutely gorgeous and what a lovely love story :o)
Jackie xx

What a lovely layout Elizabeth (the couple in the picture aren't bad either) Such a lovely way to keep your special photos.