I hope you all had a great weekend and that Monday hasn't come as too much of a shock for you.

I didn't accomplish much yesterday but I did complete this little project. 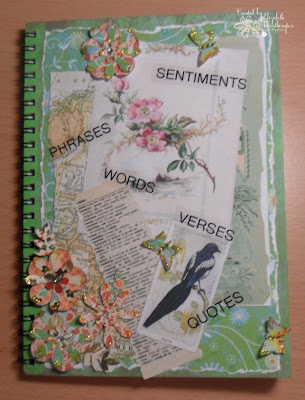 I have quite a large collection of notebooks with fairly boring covers, leftovers from when the craft space was my home office, and this one was no exception. But it's no longer an office so my notebooks don't have to be so plain and uninteresting to look at so I'm on a mission to alter the covers of them all starting with this one.

I like green, or should I say, certain shades of green are my favourites, e.g. olive tones, hunter green, some pastel shades such as eau de nil and the duck egg shades, but there are other shades that are just not to my taste at all - the vile greens. And the cover of this notebook was very definitely the latter.

I began by painting with Adirondack dabbers, Mushroom and Juniper, around the edges just to tone the green down a bit, before building a collage on both the front and back covers. Then I brought together pieces of torn pattern papers, an old map print-out, a French dictionary page and a variety of antique images of flowers and birds, most from Green Paper, and put together a collage. 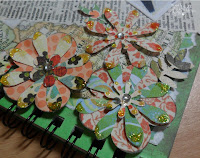 The flowers and butterflies were punched out of more snippets of paper and glittered up with yellow Stickles. The notebook is going to be used for pasting/writing in any words, etc., which I think could be used on cards or scrap layouts so the EM brought out his trusty Labelmaker and typed up the relevant words - all I had to do was randomly stick them onto the front.

The back - no flowers and butterflies here.

Being a thing of 'shreds and patches' the collage is definitely one for Di over at Pixie's Sunday Snippet Challenge #9 and as nothing new was used in the making - even the notebook was so old it had an address label from out years in Derbyshire on the front ... we've been in Scotland some 10 years now!!

If you've ever thought of doing something similar I can recommend it and can only urge you to have a go. You don't have to be a super talented artist - something I always thought you had to be - you just have to give it a go. If I can do it, anyone can :))

I think the collage has cheered up the notebook immensely and now it's a pleasure to behold.When I find the time those other notebooks are in for a complete makeover too :)

No headbanger on Dancing on Ice last night, but a few moves I thought decidedly chancy! And I'm not entirely happy with the result ... but then I don't phone vote so I can't be too critical.  It's many years since I donned a pair of ice skates, and after watching this series I've lost the yen to do so ... skating has got way to much like a blood sport for me!!!

Right, I'm off to do a bit of blog visiting ... I've a bit of catching up to do after a weekend of being out and about and generally playing hooky.

love how you've decorated your notebook, I started a diary in January, really must finish it,xx

Gorgeous!One of my favourite things to do - and doesn't it make such a difference? No, i wasn't too happy with DOI result last night but i don't vote either!
Jo x

That is a very pretty book cover you have done there Elizabeth. Much nicer than a boring cover.
I meant to make a comment about your new look blog. I really like it! Lovely warm colours - suits you Madam!

Really gorgeous Elizabeth - it'll be a delight for you to use I'm sure. Such a lovely combination of colours, papers and words - spot on!

I watched dancing on ice last night - first time for ages. Ended up hiding at the head splitting antics! Eeek!

What a lovely way to cheer up a notebook, it looks so pretty :o)
Jackie xx

What a wonderful idea for renovating an old notebook!

Lots of snippets put to good use here.

Hope all is good with you.

This is gorgeous Elizabeth! I especially love the lovely Spring colours plus the flowers and butterflies, it really is so pretty. Luv Karen xx

Gorgeous notebook - love what you've done with it. Yes DOI was a bit mad, poor Matt with his cut head! Ouch. Zo xx

I didn't like Skating with the Stars very much but Dancing with the Stars is getting to start back up and I love that show, lol I also love your collaged notebook, I too have been doing more altered book covering lately! It's just making the world prettier, one book at a time! waving hi from the hills of North Carolina :)

Good morning, Elizabeth.
Your note book cover is very pretty in pastel green and colours that go with it.
I've nominated you for the Liebster Award, as you did for me once I recall. I enjoy your work and it's very nice to return the favour.
Here's the link. http://wildcards-rosc.blogspot.com.au/2012/02/thank-you-sandee.html
Thanks for the lovely comments we exchange.
Ros.

"A thing of shreds and patches, Of ballads, songs and snatches, And dreamy lullaby! " Are you by any chance a Gilbert and Sullivan fan? xx Maggie

Lovely idea and your notebook is as pretty as a picture. Only just made it through the park gates in time this week. I blame those pogo sticks. hugs Mrs A.

this is truly stunning, and being a hoarded of notebooks it is also a brilliant idea for using the mountains of snippets currently taking over my craftroom

Absolutely beautiful Elizabeth. I'm such a wuss when it comes to altering things, too chicken to give it a go!!