A Salutary Lesson ... what happens when you are in too much of a hurry

You know how sometimes you can make a mistake and you think that you've ruined a project but when you look again somehow it's not so bad. Well, that's just what has happened to me. I have started on the poppy tag I promised myself, it's not finished yet but I thought you might like to see what I did wrong!

Here's how my tags all start out:

I use this template to cut out another tag just the same (I save all the cardboard that comes into our house). This one is cut from the back of one of those stiffened envelopes for posting photographs. I then cover them with design paper, in this case it's some of my Cosmic Shimmer/cling film coloured card, like this.

I then stamped the front with black ink, firstly, with a stamp that has writing, hearts and splodges on it ﻿- no idea what it is called - and secondly, with an ivy border pattern (bought in 1996 in Boston when I was a student and not used until now!), then finally I over stamped randomly all over with a small leaf stamp from a Basic Grey set (no name to this one either). So far so good. I then stamped the back of the tag, this time with just the ivy border and the leaf. The next part of the stamping was to over stamp with the leaf, again randomly, with Versamark and emboss with silver and here's where I made my mistake. I just went ahead stamping on the back of the tag not realising that the ink would still be a tad damp.
It should have looked like this: 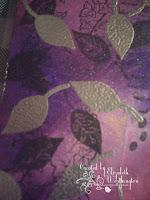 As you can see it worked out perfectly on the front side. Here's what happened on the back: 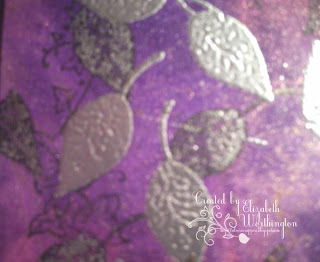 As you can see some of the embossing powder adhered to the ﻿black leaves - not a lot, but enough! My heart sunk and then I decided to go ahead with the heat gun and see what it looked like after that - if it was too bad I would have to start again. But I actually liked the effect and have now decided to go with it - happy mistake!

Still got more to do to the tag so will show you the project when it's completed.﻿
Incidentally, because the light is just awful today - so bad I have had to have the lamp on all day - and because the resident photographer (moi) is really quite crummy at it, the background colour is looking very pink and purple when in fact it is much redder with just a hint of purple.
﻿
Bye for now
Elizabeth
Posted by Elizabeth at 17:49

I quite like the "mistake"...I think it adds to the effect and gives it a vintage feel. I can't wait to see what it looks like when you ahve finished it xx

I have to say, for a mistake, it looks great! You are so patient! I have a camera like yours - never takes a good picture and doesn't pick out the proper colour - not being sarky, it's true. I try every which way to get a good snap but no, especially with the things I'm the most happy with. Hugs, Hazel x