And happy Saturday to you all. I had an unscheduled break from posting this week. I was so exhausted after a very hectic weekend of making pages for the cyber crop a rest was called for. I'm feeling a lot better today though and because it's started to rain again what better place to be than in my craft room, just raring to go.

Some time ago I wrote here about how disappointed I was with these backgrounds created with the older distress inks, Old Paper, Evergreen Bough and Black Soot, rather than the new oxides. 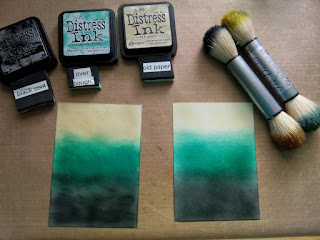 I have since invested in a wee stash of oxides but, so far, not tried to create the desired effect. Instead, I thought I'd try to rescue at least one of these and, at the same time, have a play with the large stencil, Carved Flowers by Darkroom door, won in a recent giveaway from Godelieve, Stamping Matilda - bragged about here. 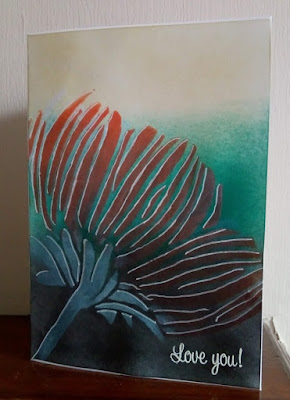 This is the result. First, I started by trying to bleach out as much of the background using just plain water through the stencil. This didn't work as well as hoped for but that could be because it had been a few weeks since the background was created and the inks would have been really well dried out. Because of this, I then decided to just go ahead and stencil more colour over the background and chance that it would work. 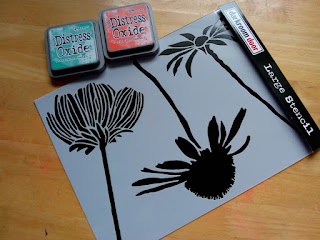 The colours I chose were Ripe Persimmon and Evergreen Bough in Distress Oxides. It still wasn't wonderful - too dark with not enough detail - so I decided to outline the details with a white Gelly Roll, medium, pen. That I liked better. To finish, I embossed a simple greeting, from Technique Tuesday's Cosmo stamp set, in white and called it done.

This Sunday is Christmas Card Challenge day and I've been playing with sprays - more of that tomorrow.

I hope the rest of your day is good - rain or shine. Should any of you live in or near Whaley Bridge, in the High Peak area of England, my heart goes out to you. I lived in the area for a few years and it was only a few weeks ago that I visited the town while on holiday. I know the reservoir well so am following the news closely. I can see that the emergency services are doing a sterling job trying to stop the water bursting through the dam. I'm thinking of all the residents and hope that they will be able to return home soon.

Yesterday I saw this on my phone, but was not able to comment (a blogger or apple issue). I don't always remember to go back later when I'm using my laptop, but now I did, because this is really stunning and dramatic!
What a great rescue of a background that you didn't like first. Fabulous!

This is so stunning Elizabeth, I love the colours and it's a beautiful floral image.
I find the original DI don't blend just as well as the Oxides, they tend to go muddy when blended over one another , whereas the Oxides don't, but having said that sometimes, it depends on the paper your using and what blending tools too, but nevertheless you've achieved a fabulous result her. Hope you are having a lovely relaxing weekend, Kate x