In A Vase On Monday - All the Yellows

Well, it's been more than a little while since I've been able to join in with Cathy's In A Vase On Monday. For those who haven't read my most recent posts I've been too ill to participate for quite a few weeks. I'm still not 100% but getting there - slowly but surely. But, I have to say, that a stroll around the garden is guaranteed to lift the spirits. Still February and it looks like Spring already 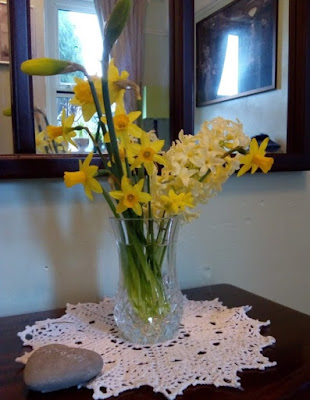 Although I was tempted by the snowdrops and crocus I was really drawn to all the yellows so picked a bunch of daffodils. The miniature, a mix of Tête-à-Tête and other varieties unknown, were the first to burst into colour but the bigger ones, again varieties unknown, are starting to open up now too. 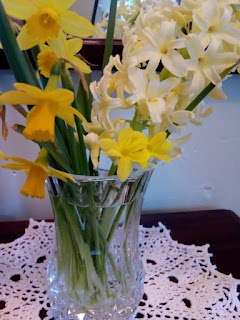 Ordinarily, yellow is my least favourite colour but I can't deny it is cheering at this time of year. The winter jasmine is almost done but I did find a tiny piece still flowering. 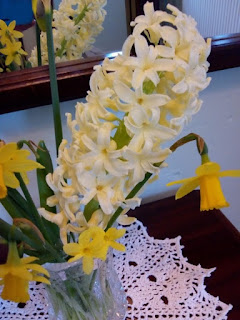 The hyacinth was cut from a bowl of three, a £2 supermarket bargain, growing on the kitchen windowsill. The head was so heavy it was drooping so much it was in danger of breaking - it begged to be rescued. 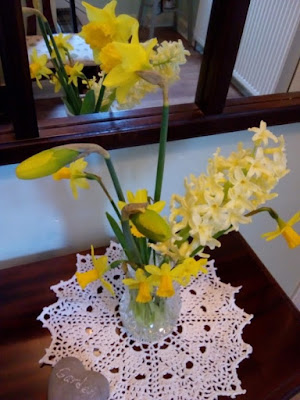 The crystal vase, a charity shop find, is now in the hall where the almost overpowering perfume from the hyacinth can drift up the stairs. It looks lovely set on the crocheted doily which, though it looks like a vintage find, was made by yours truly last year from a retro pattern found online.

Email ThisBlogThis!Share to TwitterShare to FacebookShare to Pinterest
Labels: charity shop, crochet, in a vase

Oh Eizabeth, I am sorry to hear you have not been well and do hope it has not dragged you down too much and that you really are on the mend now. Certainly the promise of spring in your garden should be a good tonic for you and I am pleased you have been able to bring some cheery blooms inside to enjoy. I know what you mean about heavy hyacinths and have accidentally broken a couple of stems this year too

The mix of yellows is beautiful - the Hyacinth is a nice touch. I hope your health continues to improve and that we'll see more of your garden's wonderful blooms.

So pretty l like seeing your in a vase posts xx

Hi Elizabeth...such a pretty vase of flowers and a real spirit lifter....I hope you continue to feel better every day now...sending a hug xxxx

I hope you are on the mend and perhaps spring will lift your spirits. I'm sure it's on the way. I love the colour of the Hyacinth.

Dear friend. I am sorry to hear that you have been ill, I am glad it is going forward with you. I haven't been so much on the web for a while. Where it is lovely with flowers, with us there are only snowdrops that bloom and crocus. I enjoy the birds starting to sing morning song, now it's spring. I wish you all the best. Love and hugs from Leila

There's nothing like a vase of flowers to pick up the spirits, every time you look at them they make you feel good.
Glad to hear that you are on the mend. It's not funny is it, getting older, so many things go wrong,
Briony
x