I hope you are having a happy crafty Sunday.  After quite a pleasant morning here - managed a couple of hours gardening - the heavens have now opened and it's pouring down. Not that I'm too bothered because it gave me the perfect excuse to retreat to the craft room and finish the card I'm sharing today.

Have you ever wondered how I go about designing my cards? Well, I often wonder that myself and actually it's pretty hit and miss. I don't make sketches and I certainly don't have a clear idea of where I'm going before I start. They just sort of develop - usually very slowly. In fact, a quick card is something of a rarity.  Instead I start with a person, an occasion or, as in this case, one item I want to use and then go from there. What follows is an illustrated walk-through of how I made this card. 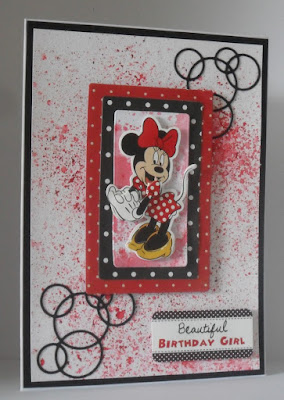 The idea for this card has been brewing for a few days. The starting point was that I wanted to make a card for a Minnie Mouse enthusiast's birthday using a Disney adhesive topper from a set that has been in my stash for quite some time, Frankly, I'm a sucker for anything Minnie and/or polka dots and I blame Disney entirely for this obsession. 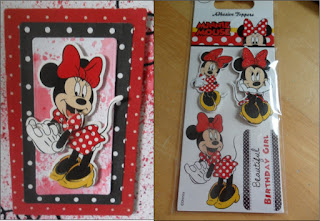 So I had the topper but there has to be more than that to a card. Once the topper was decided on a very vague idea of what I wanted to include in it began to develop. A background was essential and I wanted to make it myself but I wasn't at all sure how. It wasn't until I was watching a recording of a craft show - I 'speed watch' these to avoid the sales chatter - where the demonstrator was making the most fabulous background using alcohol inks and glossy paper. Now the background I've made is clearly not made with alcohol inks but that demo was the prompt for me to dig out my tiny set of Brushos instead. 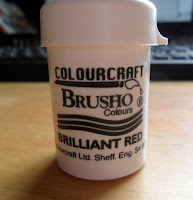 I chose a scrap of white pearlised card - using the reverse (non-pearlised) side, a tip from Sheena Douglass - and on a craft mat spritzed it with water before shaking Brilliant Red Brusho ink dust on to it. I found a second spritzing got the spattered effect I was looking for. After putting the card aside to dry, I mopped up the ink that was left on the craft mat and put that aside too.

While they were drying I cut a sheet of black cardstock - Papermill Direct - to make the matting for the spattered background, which was then adhered to a plain white card base measureing 7"x 5" (The Works Make & Create). Next I die cut the matting and layering for the topper. Dotty paper seemed a must and I was lucky to find a snippet of red/white and a sheet a black/white polka dotted paper in my stash. It's old 6"x 6" paper - Raspberry Road Designs Summer Goodness (2012) and a Crafts-~Too Designer Paper Pack - most probably 2012 too. I used a Chinese die set for this. The packaging has minimal information on it so here's a photo of what it looks like. 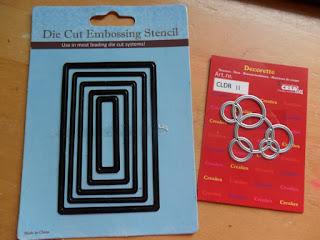 And while I was searching through the dies I came across the tiny Interlocking Circles die from Decorette (CLDR 11) which gave me the idea for the embellishments. I cut it twice from leftover black cardstock and attached it to the top right and bottom left corners of the splattered card using liquid glue ... it's so fine any other adhesive wouldn't work.

To make the topper I also die-cut the scrap of card used to mop up the ink and then layered it with the red and black patterned papers before topping it with Minnie. The final touch was to add the greeting which also came with the topper set.

And that is how this card was made. I'm submitting it to the following two challenges:

Di's Pixie's Snippets Playground - Week 285 and 286 - where anything goes as long as it includes snippets.

I hope you enjoyed reading this more detailed description of how I made the card. Normally, I simply itemise the steps that go into making a card, making it all seem so quick and easy, but I thought this blow by blow account would give a truer insight into the tortured thinking that goes into the whole process. I suspect that you have a much more organised approach which makes cardmaking easier, simpler and quicker. I truly am the slowest card maker in the World! I'd never be able to make a living at it, that's for sure.

It's going to be a good night tonight. Poldark is back!

I wish you all a lovely evening.

A very sweet Minni Mouse image and pretty card Elizabeth and I'm a big Brusho fan, many thanks for joining our die cut them at Allsorts challenge.

Just finished watching Poldark, so catching up with my blog visiting. :-)

Great card, I love the splattered background. I must use my Brushos more - how can those little pots seem so scary! xx

Hi Elizabeth, a super card for any Minnie Mouse lover, love the simple colour scheme and the beautiful paper you made with your brushos, those rings make the perfect embellishment too. Have a wonderful week... Megan

I know nothing about card making Elizabeth, but having recently returned from Disneyworld, I see Mickey Mouse everywhere now and I think your interlocking circles are echoing his head & ears perfectly which I am sure is exactly what you intended, it looks just fabulous.

Brilliant card Elizabeth - I love Mickey and Minnie! Wonderful to read all the process as well - I promise you that I craft in just the same way - it's uncanny really! And I do think those rings echo Minnie's ears beautifully - a lovely die if I might say so :)

A great Minnie card and I so enjoyed reading your illustrated story of how it all 'happened'. Most of my cards start with just something or other and then 'happen' as I go along, probably not the most efficient way of working but very enjoyable all the same which for me is what it is all about.

A fabulous card Elizabeth, I love the Minnie topper and the dies you've used.