In A Vase On Monday - Autumn's Glory

A sudden change in the weather, for the worse, meant that these flowers were picked during a very quick dart around the garden today, so I can't say much thought and planning went into my choice for Cathy's meme, In A Vase On Monday. 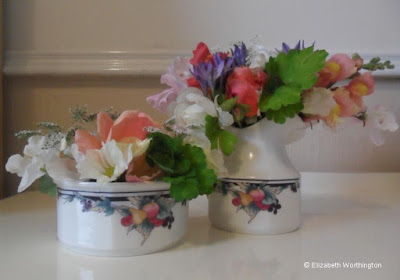 Except, I did think I might use this cream jug and sugar bowl set. Another of my charity shop finds, it's Royal Doulton and the pattern is Autumn's Glory - very apt I thought until I started picking. Instead of making a beeline for the yellows, purples, reds and oranges that are associated with this time of year, I was drawn to the whites and peachy pinks that, though not normally around at this time of the year in Ayrshire, are still very much in evidence in my garden this October. In fact, I'd say they are this year's autumn glory after all. 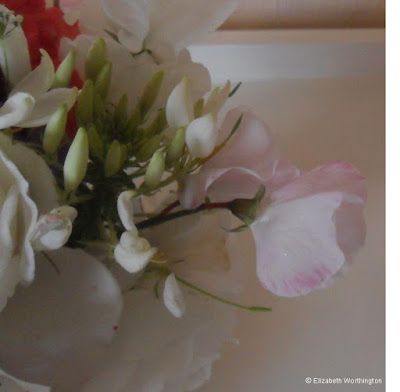 First, there was the white spider flower, Cleome Spinosa Colour Mix ... it's been catching my eye for quite a while now. This is the only plant that bloomed, out of all the seeds I sowed only three made it to maturity, but what a beautiful white flower it has turned out to be. I don't think the other two plants will flower now - too late in the season. 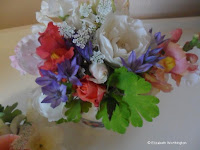 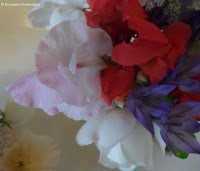 As I've said it is hard to believe we are now well into autumn, there's so many late bloomers to be had ... roses, white Iceberg floribunda and the peachy unknown which has just kept on flowering since June, white Spencer sweet peas, peach, orange and yellow antirrhinum (tall mixed), and the delicate umbels of ammi majus. 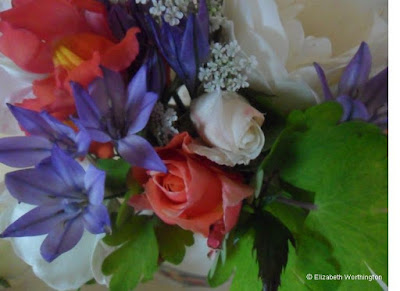 I was going to stop at combination of white, cream and peach flowers until I spotted the striking violet blue of the California Hyacinths, Triteleia Koningin Fabiola, peaking above the foliage of a hardy geranium and couldn't resist cutting a few. Apparently they are late spring bloomers ... either they are very late or very early! 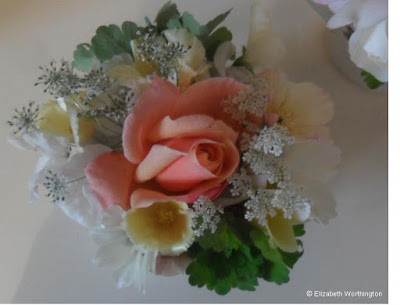 The bowl is filled with cream and white Californian poppies, Eschscholzia californica, white cosmos and sweet peas, ammi majus and one perfect peach rose bud. So glad to see last year's cream poppies have seeded themselves in the rose bed. Hopefully they will do so again this year. For foliage, I've used young aquilegia leaves.

Many thanks for dropping in to see what's in the vase this week - your visit is much appreciated.

Pretty! I love your Mondays :)

Quite a few similarities between our vases, Elizabeth - glad to hear your Californian poppies have self seeded and I hope mine do. They have flowered for months here. What a good idea to use the cream jug and sugar bowl - it works really well. Well done to get one cleome plant - that's one more than I did! Thanks for sharing

Both vases are gorgeous but that peach rose did me in...I so want a peach rose.

Beautiful! It's strange for me to see California poppies - and sweet peas - blooming this time of year. Here in southern California, they're usually gone well before the end of spring.

I cannot believe how quickly these Mondays come round Elizabeth. What a pretty pair of displays, I love the "vases", they are so apt :o)
Jackie xx