I hope you had an enjoyable weekend and that Monday hasn't been so bad either. I haven't been very well, picked up a bug somewhere which has had me feeling way under par for the last week or so. However, I'm feeling a bit perkier today so hopefully that's me on the mend.

All that means is that there will be no vase today - haven't been out of doors yet. Besides, after the recent snow - which, as predicted, didn't last long - and the never ending rain, there's not much worth picking at the moment.

Instead, I have an overdue share ... I think they may have appeared as works in progress some time last year but not the finished twosome. 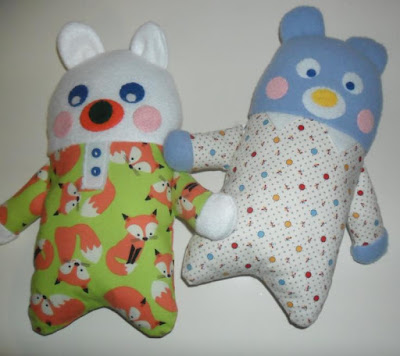 I made these little pyjama bears for the two great-grand babies that were born last year. They are soft and cuddly, and intended to taken to bed by the babies, so made only from fleece and cotton fabrics with felt features. There's nothing in the construction that would harm baby's delicate skin, like buttons for example, or that could cause any injury. The blue one is for a boy so he has a felt collar and the white one is for a girl so has a little pinked detail with felt 'buttons'.

The easy to make pattern appeared in a copy of Love Sewing Magazine but is from Retro Mama: Scrap Happy Sewing by Kim Kruzich - details for which can be found on the Retro Mama blog.

Now, I think I may just have a bit of time to get back to working on the much neglected Christmas scrapbook album ... this could be the longest project on record!

Take care and have a lovely evening,

They really are pretty Elizabeth and so cute. Barbxx

lovely to see your pyjama bears they look so soft perfect for little ones to cuddle into.