In A Vase On Monday - October's Unexpected Delights 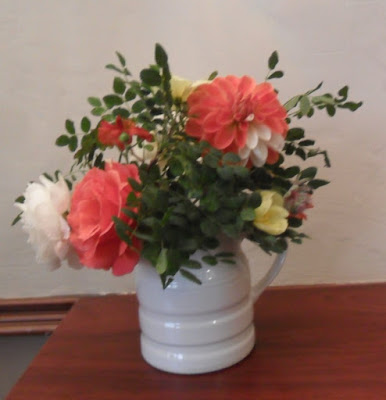 Today's In A Vase On Monday, for Cathy's meme on Rambling In The Garden, is full of unexpected delights - that is unexpected for the month of October! 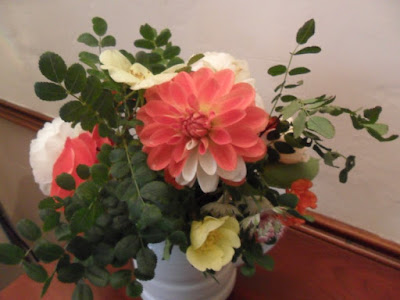 After waiting all summer and finally giving up on dahlia 'Moulin Rouge' suddenly there it was this morning, just one stunning bloom. Not looking exactly as depicted on the packaging - the image had a white petaled centre with a 'skirt' of bright red - it's still a striking combination of orange and creamy white petals. 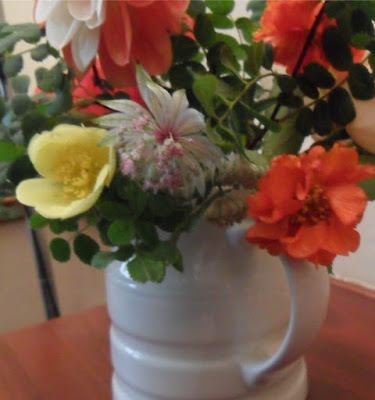 Yet more surprises were in the sudden appearance of blooms on the rosa 'Canary Bird', the yellow rose with the most attractive foliage, and astrantia 'Buckland', both flourishing I suppose because of the warmer than normal temperatures we've been enjoying lately. And geum Mrs Bradshaw, despite having the September chop, continues to produce her cheery orange flowers. 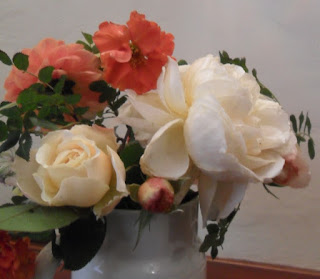 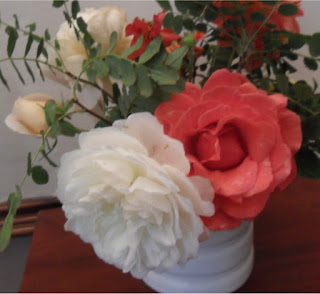 Other roses continue to bloom too, for example, creamy 'Elina' and 'Simply the Best' which is a wonderful burnt orange colour, perfect for this little arrangement. And next to 'Simply the Best' is my favourite white rose, 'Tranquility'. There hasn't been a single bloom for a month or two but suddenly there was this lone and lovely flower, just like 'Canary Bird'.

The white jug, inherited from my mother, though nothing special is really useful. Most flowers look good in it.

With a storm forecast, the downgraded hurricane Ophelia, I had, for once, no qualms about cutting everything that was still in flower this morning. The chances of them surviving the ferocious winds that are now howling through the garden are few. Better that they are in plonked in vases around the house than out there taking a battering. I've even stripped the sweet peas - they are now filling the hall with their wonderful perfume. Much nicer than being blown to bits.

For more, and better, arrangements do check out Rambling in the Garden.

I am so pleased you have had at least ONE dahlia, Elizabeth, even if it wasn't waht you were expecting - and great to have these late roses too. It has been the same here, with late blooms appearing suddenly on all sorts of things, so who knows what will be in next week's vase! That is indeed a useful jug, which reminds me that I think I have one like it but haven't seen it in a while so must seek it out... Love all your soft colours today so thanks for sharing

I love the coral and white combination. The dahlia was worth waiting for, I'd say!