There's been a lot of remembering this week ... the media have been doing much to mark the Centenary of the end of the WW1 in 1918, concluding today, of course, with Remembrance Day Services all over the country.
All this had me thinking back to the Remembrance Day Parades I took part in as a member of  the Women's Royal Army Corps. One in particular. It was 1966 and I was stationed at Catterick Garrison, North Yorkshire. The weather was like today, miserably chilly and raining, so the dress order was to wear our greatcoats. 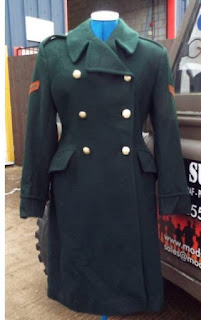 This was an aptly named garment - made of a thick wool fabric. Heavy at the best of times, it got steadily heavier as the rain poured down. I'm sure that by the end of the parade my coat weighed a good 6-7 pounds more than it had when we set out that morning. Remembering that day got me to thinking about the men fighting in the trenches of WW1. 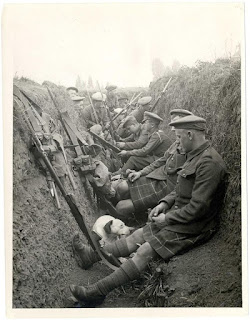 No lightweight man-made fabrics for these Scottish soldiers and those kilts must have been like my greatcoat - warm when dry but heavy and decidedly uncomfortable when soaked ... and it did rain - a lot! 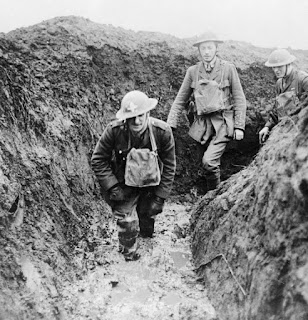 The greatcoats, which had been regulation garments for British forces since the Crimean War of the 1850s, proved ill-suited to the desperate conditions. Weighed down by mud, it was apparently not unusual for the long-suffering soldiers to use their bayonets to slash lengths of fabric from the sodden coats.

I was lucky, I only had to suffer for a few hours but remembering has made me spare a thought for the men who had no choice but to wear garments that were, by today's standards, not fit for purpose. Men like my great-grandfather. 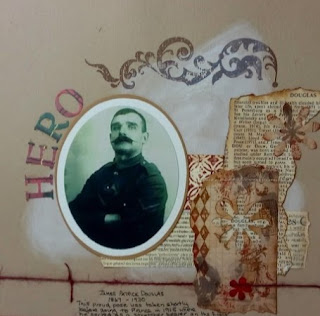 James Patrick Douglas, 1867-1930. He enlisted in 1915, aged 48, and served as a Regimental stretcher bearer with a Field Ambulance unit. He survived the war but returned home suffering from the after affects of gas warfare and shell shock - known today as post traumatic stress disorder.

'War is indeed a stinking business which ... regimental stretcher-bearers ... could not fail to realise.'