What's On Your Workdesk Wednesday - Week 492

I'm betting a few other WOYWWers have said this too, Wednesday already! Where have the last seven days gone? What's On Your Workdesk Wednesday seems to come round sooner every week. Could be I'm feeling the pressure now that it's only a few weeks to Christmas - so much to do, so little time. 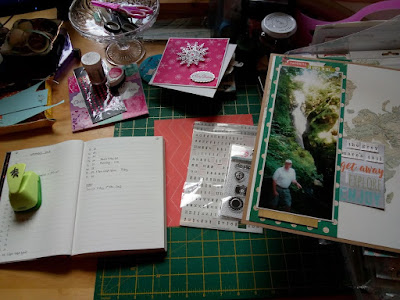 My desk this morning, There's still a teetering pile to the right. That's an unfinished scrap layout just about balancing on the top. I'm uncertain how to finish it so it's there to remind me that I really should. The set of stamps, alphas and patterned paper might possibly be of use. That's my bullet journal, a work in progress, to the left. I've put a leaf punch to work as a temporary paperweight. What made me choose this Lonely Planet notebook is that it has quotations sprinkled throughout - all travel related in some way. Today's is - 'Not until we are lost do we begin to understand ourselves.' - Henry David Thoreau

Still on the desk, at the back, is the card I was working on last week, and just to the left are the supplies used. 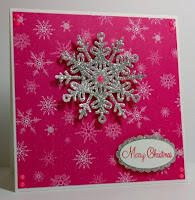 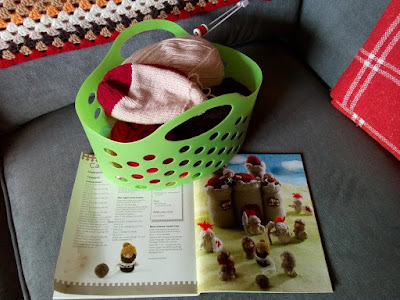 Sock knitting has had to be abandoned in favour of knitting this medieval castle. It's for a little boy who will, I hope, love playing with the little characters. Three towers done so far, two more to do and, of course, all those tiny people. 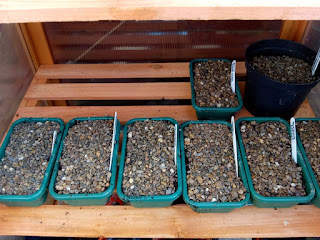 My little trays of promise! Clearing out a garden shed I discovered a box of old seeds and decided to sow them in the hope that some are still viable. Either they will grow or they won't but I figured I had very little to lose by trying. I could end up with a lovely lot of bedding next year.

Finally, the book bit. I've been bingeing on thrillers. After the Alan Turing book I needed something less academic although I can't call any of these light relief. 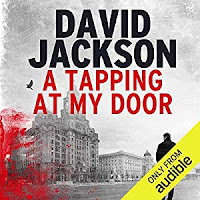 I can only describe David Jackson's 'A Tapping At My Door' as a grim read. A serial  killer in Liverpool is murdering his victims in the most gruesome manner, and it becomes apparent to the detective assigned to the case that the threat isn't to the people of Liverpool - it's to the police. 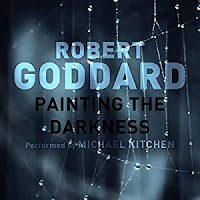 'Painting the Darkness' by Robert Goddard is a historical mystery set in the late 19th century. The audio book is read by Michael Kitchen, he of Foyle's War. He has the perfect voice for a Victorian tale. The story is full of the twists and turns and the ending is truly shocking. 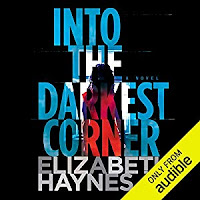 Elizabeth Haynes' 'Into the Darkest Corner' is a chilling psychological thriller about an abusive relationship and it's aftermath of OCD suffered by the main character, Cathy. Elizabeth Haynes worked for many years as a police analyst and I think it shows in the way the book is written.

I found this last book very hard to put down, as the EM would attest to should you ask him. It's the one that will stay with me for the longest time, that's for sure.

If you haven't participated in What's On Your Workdesk Wednesday before but fancy joining in the fun do pop over to the Stamping Ground where you can find all the information you need here. It's really too easy, post a photo of your desk, tidy or messy it doesn't matter, and add your link to all the others. It's fun, you'll see.

In the meantime, have a very happy WOYWW and a great week ahead.

Hi Elizabeth, love the Christmas card. I agree about the seeds, nothing lost if they don't germinate, but great gain if they do.Have a great week, Hugs, Shaz #5 X

Hello my friend. Firstly I must say sorry for not commenting on your Friday post. I did read it but to be honest I have had a particularly painful few days with this b***** sciatica and sitting at the lap top really hurts. Even sitting to sew is more than I really want to do so I've done the bare essentials only. I'm doped up to the eyeballs with pain tablets so lets hope it eases soon. I have an appt with the Dr next Thursday so will see what she says if there's no improvement.
I love the trays of promise in your garden....fingers crossed.
Hugs,
Annie x #15

I have never seen a knitted castle... how fabulous! I think the audio book ready by Michael Kitchen would be great to listen too. Helen #1

Oh happy memories Elizabeth, my Mama knitted several dolly houses and a nativity and they were incredibly loved and well played with. Indeed, the nativity set is lined up to sit on her window sill in the care home this year. Serious love, knitting those! I like the pink of the Christmas card, a removal from traditional is absolutely no bad thing at all, it’ll stand out beautifully on the recipient’s mantelpiece!

Just watch your language Elizabeth...."Only a few weeks to Christmas indeed"! Loving the snowflake card, very pretty. Hope you have a great week and a lovely woyww, Angela x15x

Hi Elizabeth. The pink Christmas card is very pink. Not a colour I would have thought of using for Christmas, but it's a lovely card, so I might make some myself. Good luck with the seeds, fingers crossed you have something plant in the spring. Happy WOYWW and have a lovely week Heather x #7

Love the card Elizabeth and that choice of audio books is right up my alley. There seems to be a time theme on the blogs this week. I don't dare see how many days are left until Christmas. Happy WOYWW. Sarah #17

Great idea with the seeds and I just love love love the castle. What a fabulous present full of love in every stitch.
The books sound good - not sure if the other half has read the Robert Goddard one, he is a fan - now I am contemplating the other two - certainly up my street.
Hugs, Neet 10 xx

I love the little castle - looks like fun for you and them! Hope you managed to find the Clanger pattern - if not I can send the link. xx Jo