Challenge 24 for the CCC has been set by Carol - All Wrapped Up. This theme is open to personal interpretation so I've chosen to use these cosy mittens. 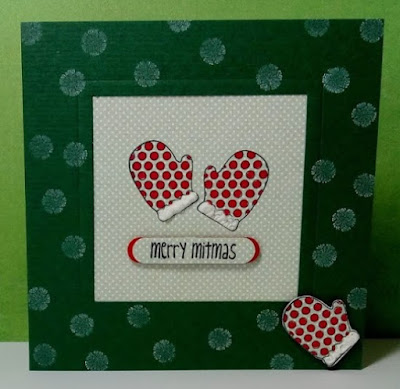 I've used a square aperture card - to make it look less plain it's been stamped with a snowflake from the Forest Magic stamp set that I have used several times before. The white ink is Frost White from Color Box.

I've had the stamp set, a Christmas 'Tinchie' from Personal Impressions, for a few years but somehow, cute as it is, it's never been inked up until now. Using a black Memories ink pad, it was stamped out twice, once for the topper and the other for the embellishment, on two scraps of patterned paper from a My Mind's Eye Six by Six pack, Darling Dear (2011), and coloured with a Poppy red Promarker. The cuffs are embellished with white Fluffy Stuff.

The greeting was stamped in black and punched out with a Stampin' Up label punch. I found a tiny snippet of red card which made the perfect mat for the greeting. I used the same punch for this but snipped the label in half before fixing it to the back of the greeting ... it's a trick I was shown at a Stampin' Up class a couple of years ago. 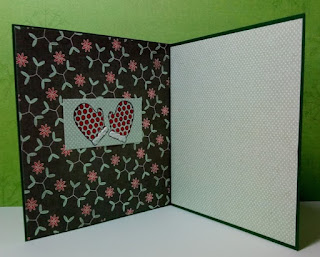 I would like to submit this card to the following challenges too:

Thanks for popping in. Hope you are having a wonderful Sunday.

I love those cute mittens Elizabeth, fab card for our theme this time.
Lorraine

Hello Elizabeth, what a fabulous card, I love the colours you've chosen and those mitts are just lovely, Kate x

Hello Elizabeth. Your card for this challenge is perfect, especially as the weather has turned very cold here. Beautiful card. Hugs Rita xxxxxx

A really gorgeous card Elizabeth - and I love the inside of your card too! Hugs rachel x

Hi Elizabeth, I'm running late, lol. Love your card, great take on the theme. I cheated and made gift tags!Some fab stamps used- I know what you mean about stamps that have never seen ink- it's shocking how many of mine haven't. Hugs, Shaz X

Hello Elizabeth, I do like how you have coloured and embellished the inside of your card. The mitts are a sweet idea for Carol's challenge. Hugs ValeryAnne.

Love the warm mittens Elizabeth, and I like the way you have also decorated the inside of your card too. Finishes it off so well. Christine x

A really lovely card! Apologies for a hasty comment and for me taking so long to get here! Blame Dudley!

Great to see you in the Playground.