... from stormy parts today. It's wet, windy and grim ... such a contrast from yesterday's sun and bright blue skies.

I have a quick share today. It's the last of the layouts I managed to make at Mind The Scrap's recently cyber crop. In truth, I wasn't very productive - too many distractions that particular weekend. I'm not complaining though. at least there's a few more photos scrapped and now tucked away in the relevant albums. 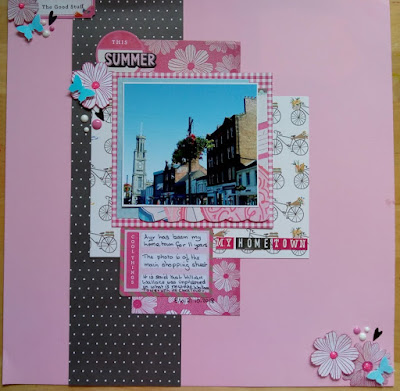 This photo is of the High Street in Ayr where I have lived for the past eleven or so years. Like most towns up and down the UK, the High Street is suffering with lots of shops closing doors and very few new ones opening up. However, there's still a few nice shops, not to mention the ubiquitous charity shops. When I have time I like nothing better than a trawl round those. It also has, among the equally ubiquitous eyesores of the 60s and 70s, a few architecturally interesting and/or beautiful buildings including the Wallace Tower - named after Sir William Wallace, he of  'Braveheart' fame.  It is said that he was once imprisoned in the building that was previously on the site of the tower for setting fire to a barn with 500 English soldiers inside!!! There is a statue of him on the facade of the tower.

Most of the papers used are from Mind The Scraps October kit but I did use a pretty patterned piece of packaging for layering - the colours were just right - you can see it peaking out from under the photo. I fussy cut some of the flowers from one of the papers and punched some butterflies from a scrap of card that I'd brushed with turquoise watercolour paint. All the other embellishments are from stash.

I hope you are having a great Saturday, no matter what the weather is like wherever you are.