I hope you are enjoying the weekend so far. We have, for the most part, been enjoying the hot, sunny weather, though today is cooler and overcast. A temporary condition I hope.

As you can imagine, this has meant very little time for crafting, and therefore blogging about it, but I do have a card to share today. 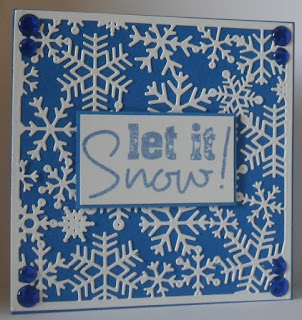 It's made from several snippets, one of which is admittedly quite a sizeable scrap of card, and is Christmas themed so perfect for both Di's Snippet Challenge over on Pixie's Crafty Workshop and ScrappyMo's Rudolph Day Challenge on Scraps of Life by ScrappyMo!

How the card was made: 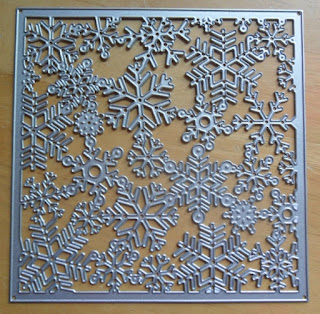 The snowflake die makes a lovely addition to a card but I did find that once cut this particular cardstock, which is quite heavy at 300gsm, wasn't easy to remove from the die. I should have prepared the die by wiping a tumble drier sheet over it - that might have helped.

That's it for now.  I hope you've had a lovely Sunday.

Beautiful! That background di is so lovely and looks great against the blue background. I am glad you showed this die as I have been eying it up on ebay and Alia and was still undecided. I have not bought ony of them yet but am sure tempted now!
Beautiful card, Elizabeth.

Thanks for taking part in the May Rudolph Days Challenge.

What a gorgeous snowflake card front die which gives a really beautiful base for your sentiment plate prettily inked in blue. This is a great card Elizabeth. Thank you for joining in with the May Rudolph Days Challenge. x

Hi Elizabeth,
Happy Rudolf Days.
what a really brilliant card and such a super design also.
Love the colours used and that die is really super.
Thank you for joining the Rudolf Challenge.
Lots of crafty love. Jenny L. GD

Stunning card Elizabeth! Love the blue and white and that snowflake die is utterly fabulous! My trick for dies like that is to add a piece of waxed baking parchment in between the die and the card you're cutting. That way the die falls out of the die really easily and you then just need to peel off the waxed paper from the front of the die cut.

Free postage if you buy £9 worth of stuff from JS, I usually add in a black stamp pad or similar as I know I'll always use those! :)

Great snippets card for Rudolph, Elizabeth! You can never go wrong with a snowy design for a Christmas card!! Hugs, Darnell

Love the snowflake die and your lovely blue background, great use of snippets too.

A super Christmas card and I love the snowflake die. I have a card-sized die of a different design and getting the card out of the die was a bit of a nightmare - such thin pieces but as you say worth the effort for the effect.

so pretty..I love snowflake cards..
Wondered who made that die?

Gorgeous Christmas card Elizabeth, I can understand that the lovely cut out took some time to remove from the intricate die.

Hi Elizabeth, a super card and it shows just how big some of those dies from China are, love the blue and white colour combo and it makes for a perfect wintry Christmas card, thank you for playing in Snippets Playground this fortnight, good luck in the draw... have a wonderful week... Megan GD

Oooh blue goes so well with snowflakes and you've created a lovely wintery feeling card... that die is rather nice too x