In A Vase On Monday - Here Comes The Bride - and a garden update.

Despite very mixed weather, mostly freezing cold old but dry, I've been doing an awful lot of gardening and not much flower gathering, which is why I've missed several weeks of Cathy's In A Vase On Monday. However, as it's May Day, and our early flowering clematis are looking especially bonnie right now, I've taken time out to pick a few blossoms from C. macropetela Broughton Bride today. 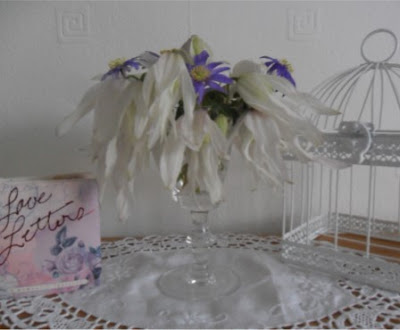 The white bell-shaped flowers have just a hint of purple on the petals and greenish white centres. We have two plants, one on either side of the garden, and both are performing incredibly well. 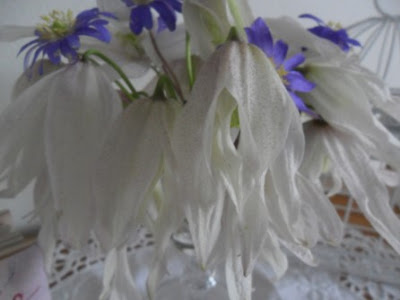 I was interested in the name Broughton Bride. Bride is fairly obvious from the appearance of the flowers but Broughton, apart from being alliterative, was not so obvious. So I did a bit of online research and discovered that this clematis was bred by the late Vince Denny in 1990 and was named by him in 1998 after the village in which he and his wife Sylvia lived. So nothing to do with Broughton in Edinburgh, an area near where I grew up, as I was fondly imagining. 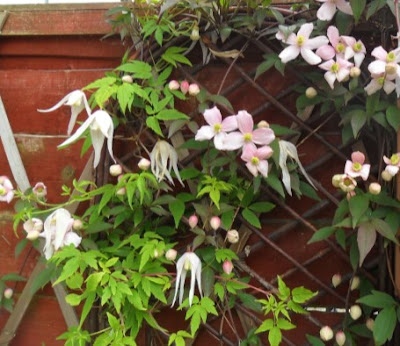 Here's one of our C. Broughton Bride growing together with  C. montana Pink Perfection ... a simply perfect combination.

I'm so enjoying my spring garden which is throwing up so many surprises, almost on a daily basis. (Those surprises are mainly because I forget what I've planted and where.) Here's one discovered down in the woodland area just this morning. 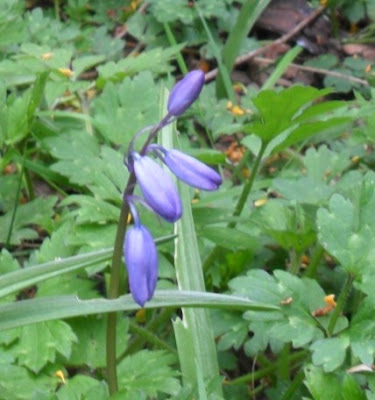 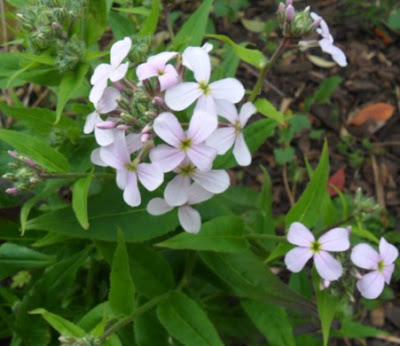 And this is another. Sweet Rocker, hesperis matronalis, grown from seed two years ago and not expected to come again. It appears to have naturalised at the entrance to the woodland area - the perfect spot for it.

Now, if I could only get on top of the weeding, particularly the ground elder, all would be perfect in my slightly wild garden. I'm planning to plant another rambling rose in the back garden and a climber in the front this coming week. We can never have too many roses. There's also dahlia tubers being cosseted in the cold frame together with some over wintered geraniums. The dahlias are a bit of an experiment. I've not grown them from tuber before but I'm encouraged by Cathy's successes last year. Hopefully I will have as many gorgeous blooms as she has had in previous years to put in vases later on in the year.

Discover more about Cathy's garden and find out what others are picking and popping in a vase today over at Rambling In The Garden,

They look like ballet dancers skirts - a lovely clematis!

I've never seen that Clematis before - bride is a perfect description! It's a graceful flower in the vase and in your garden.

Broughton Bride is gorgeous, isn't she? I had been admiring her on Brian's blog Brimfields.com recently and certainly will consider having one myself. Is it Broughton in Oxfordshire where it originates? Hope she lasts at least a few days in your vase. How exciting to be having all these surprises in your garden - I wonder what it will be next? Good luck with your dahlias this year

The flowers are so lovely x